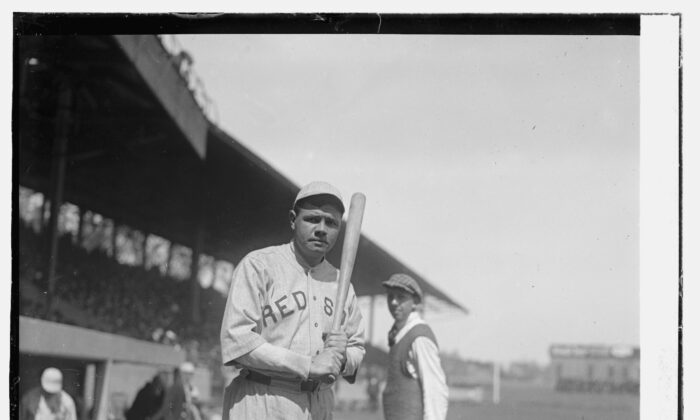 The Years of The Babe: How 2 of Today’s Best Players Have Brought Babe Ruth Back to Life

Dustin Bass
Dustin Bass is the host of EpochTV's "About the Book," a show about new books with the authors who wrote them. He is an author and co-host of The Sons of History podcast.
View profile
Follow
biggersmaller
Print

On a July day in 1914, George Herman “Babe” Ruth Jr. took the mound for the Boston Red Sox to pitch seven innings in a 4–3 win over the Cleveland Indians. No one knew it yet, but the 19-year-old left-hander would become the greatest hitter in the history of baseball.

Before Ruth began his torrent through the majors as the game’s greatest hitter, he spent the three seasons following his debut predominantly as the Red Sox’s ace pitcher. He pitched 866.5 innings in those three seasons (1915–17) and finished with a 65–33 record, 2.06 ERA, and 410 strikeouts. It was after the 1917 season, in which he would post his career-high 24 wins, that he would begin his transition into being a two-way player, and then, ultimately, into the hitter known as the “Sultan of Swat.”

In those initial three seasons, he would use his bat only sparingly, averaging 117 at-bats. In his next two seasons, he would have 317 and 432 at-bats, respectively. In 1918, he led the league with 11 home runs, a number that seems infinitesimal compared to his later years. The following year, in his final season with the Red Sox, that number jumped to a league-leading 29. He would also lead the league with 113 RBIs and finish the season with a .322 batting average. As his plate appearances increased, his time on the mound decreased. But he was still a dominant arm, finishing out the 1918 and 1919 seasons with a combined 22–12 record, a 2.59 ERA, and 70 strikeouts in 299.2 innings pitched.

The game had witnessed numerous two-way players before. It had been common practice in the 19th century. As the game entered the 20th century, it became less common. Regardless of which century, no one would come close to being as dominant on the mound and at the plate as Babe Ruth. At least, not until the 21st century.

When Shohei Ohtani agreed to join the Los Angeles Angels at the end of 2017, he was touted as a phenom and an anomaly. He had been courted by just about every team in the majors before ultimately deciding on the team that was logistically closest to his home country of Japan. The 6-foot-4 right-handed pitcher and left-handed batter had already cast his shadow over the league, and it was gigantic.

The questions, however, abounded. Would he be elite at both positions? Would he eventually be forced to transition into a one-way player? Could he remain elite at either position against the world’s best players?

In his 2018 rookie season, Ohtani met those expectations—sort of. He won the American League Rookie of the Year Award primarily for his offensive performance—hitting .285 with 22 home runs, 61 RBIs, and 10 stolen bases. An elbow injury shortened his season on the mound, where he pitched only 51.2 innings, and ended with a 4–2 record, 3.31 ERA, and 63 strikeouts. At season’s end, he underwent Tommy John surgery for his elbow.

He wouldn’t pitch in 2019 and would only be cleared to hit as the team’s designated hitter starting in May (a month after the season began). With nearly 60 more at-bats than his rookie season, however, Ohtani’s numbers didn’t meet expectations. He finished with 17 more hits, but fewer runs, home runs, and doubles, and nearly the same amount of RBIs with 62. Before the end of the 2019 season, Angels General Manager Billy Eppler announced that Ohtani would undergo another surgery, this time on his left knee. It would require an eight- to 12-week recovery period.

To add insult to the injuries, the 2020 season was nearly scrapped as a new disease originating from Wuhan, China, swept across the globe. The world came to a screeching halt, and baseball along with it. MLB announced its season wouldn’t be starting until July 23.

The 2020 season was more than forgettable, and so were Ohtani’s numbers. He wouldn’t get through three innings on the mound before his elbow injury flared up again. He would finish with 1.2 innings pitched, eight walks, and an astronomical 37.79 ERA. His batting wasn’t much better, finishing with a porous .190 average, seven home runs, and 24 RBIs in 153 at-bats.

In three seasons that showed promise but were scuttled by injuries and the plague, it appeared as though the Ohtani two-way experiment was destined to peter out.

The Sultan of Starts

Five years before Ohtani left Japan to make California his home, an American kid from California would make his home in New York. In 2013, the New York Yankees drafted the soon-to-be larger-than-life outfielder, Aaron Judge. The 6-foot-7 Judge wouldn’t see his first major league at-bat until Aug. 13, 2016, but it would be a memorable one: a home run to center field at Yankee Stadium.

As Judge entered his first full season, no one could have expected the offensive explosion that would ensue. He burst onto the scene in 2017, crushing 52 home runs, scoring 128 runs, and earning 127 walks—all of which led the American League (AL)—as well as driving in 114 runs, second in the AL. Those monstrous numbers earned him Rookie of the Year and runner-up for MVP. The baseball world was, perhaps, witnessing the second coming of Ruth.

Judge’s follow-up season, however, would be hampered by injury.

On July 26, 2018, Judge was hit by a pitch, causing a “chip fracture” in his right wrist. Though he tried playing through the injury, the medical staff decided to sideline him for a minimum of three weeks. Prior to his injury, he was batting .266, with 26 home runs, 61 RBIs, 70 runs, and 68 walks—all of which led the Yankees. He would only hit one more home run, tally six more RBIs, and seven more runs. His 2019 numbers were nearly identical after an oblique muscle injury shortened his season.

In August 2020, shortly after Judge was placed on the injury list for a calf strain, sports columnist and author Steve Serby referred to Judge as the “imposing Sultan of Swat” but asked the all-important question: “Have we already seen the best of him?”

Due to Judge’s continuous health issues, would his rookie season be the penultimate of his career?

As the pandemic-laden season of 2020 ended, Judge’s numbers were much like those of Ohtani: forgettable. The entire season for baseball fans, indeed the entire year for humanity, was one worth forgetting.

A Hundred Years in the Making

Whether Ohtani or Judge wanted to acknowledge it, there were two possibilities facing them. With constant injuries, there was the possibility of both becoming mere footnotes in sports history—tales of greatness that might have been. The other possibility was that they would match, if not exceed, the Babe Ruth comparisons they had unwittingly but fittingly been saddled with. Ruth’s ghost awaited. It wouldn’t have to wait much longer.

Ohtani and Judge entered the 2021 season healthy and ready, but as MLB writer David Adler wrote, “The 2021 MLB season really was the Year of Shohei Ohtani.” His unprecedented season would launch the phrase “The Greatest Sho on Earth” from possibility into reality.

In much the same way as Ruth did in his final year with the Red Sox, Ohtani would dominate as both pitcher and hitter, and he set the tone for the season in his first game on the mound. Ohtani pitched the final game of the season opener against the White Sox. He finished the game giving up only two hits, an earned run, and striking out five over 4.2 innings. In the first inning, he threw a 100 mph pitch and then crushed a 451-foot home run that would leave the yard at 115 mph.

By the end of the season, he would hit 46 home runs, steal 26 bases, drive in 100 runs, score 103 runs, and hit 26 doubles and a league-leading eight triples. On the mound, he would finish with a 9–2 record, 156 strikeouts, and a 3.18 ERA over 130.1 innings pitched. His performance wasn’t rare—it was the first of its kind. He joined five other players to have at least 45 home runs and 25 steals in a season, but none had ever pitched, much less struck out, 156 batters.

The baseball world was officially put on notice. The greatest two-way player the game had ever witnessed was here. The Baseball Writers’ Association of America took that notice and appropriately and unanimously voted him the AL MVP. Ohtani also earned a Silver Slugger Award and was named to his first All-Star team. Not only was it his first All-Star selection, but he was the first to ever be selected as a pitcher and a hitter.

As of this writing, the Angels have 16 more games left. Ohtani has surpassed his pitching numbers with a current 13-8 record (lack of run support has been an issue), a 2.43 ERA, and 196 strikeouts over 148 innings. Offensively, he currently has 34 home runs, 89 RBI, 82 runs scored, and 26 doubles. With approximately 40 more plate appearances (health permitting), his final numbers could very well resemble that of his MVP season.

But as much as the “Year of the Babe” belonged to Ohtani in 2021, it belongs to Judge in 2022. The modern-day Sultan of Swat finished the 2021 season with very good numbers: 39 home runs, 98 RBIs, 24 doubles, and 89 runs scored to go with a career-high .287 average. But those numbers aren’t historic. This year, Judge is making and chasing history.

As of this writing, the Yankees just finished their series with the Milwaukee Brewers, in which Judge hit two home runs―his 58th and 59th―in the final game. Judge is merely one home run away from tying Ruth’s iconic 60 and two away from Roger Maris’s 61.

When—it’s hardly “if”—Judge reaches 62 home runs, he will own the Yankees’ club record as well as the AL record. When he’s finished, Maris and Ruth will be placed second and third, respectively. Numerically, it’s possible for Judge to hit 70, but it’s incredibly improbable. The 70 Club belongs to two sluggers who played in the National League: Mark McGwire (70) and Barry Bonds (73), though those records were achieved during MLB’s unfortunate steroid era.

The Rarest of Moments

Regardless of record holding, the past two seasons have given fans of baseball things they may never witness again, at least not so close together, and perhaps not by any other players. What Judge has done has been accomplished by only a handful of players: Ruth, Maris, Sammy Sosa, McGwire, and Bonds. And those last three were branded with steroid usage.

Even Maris had an asterisk next to his 61 home runs for 30 years because he broke Ruth’s record after MLB extended the season by eight games. What Ohtani has brought to the league—an utterly dominant two-player—hasn’t even been hinted at since the days of Ruth.

Together, Ohtani and Judge have traversed approximately 8,000 miles to launch the American psyche back 100 years to the days of The Babe. Perhaps in the decades to come, baseball lore will reflect on the 2021 and 2022 seasons in much the same way that baseball fans reflect on the 1919 and 1927 seasons: as hallowed moments in baseball history, moments that may not happen again until the 22nd century.