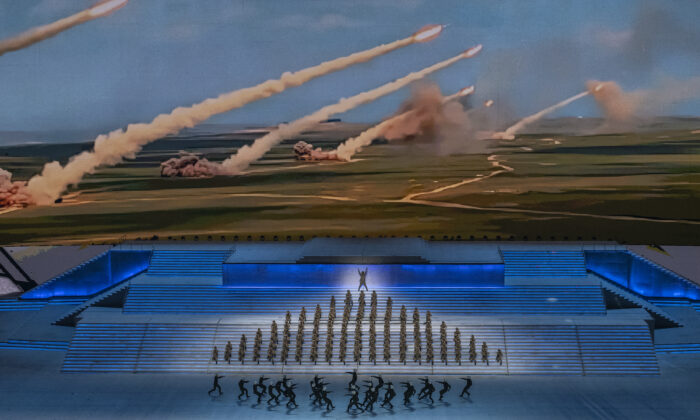 Performers dressed as military perform in front of a screen showing rockets being launched during a mass gala marking the 100th anniversary of the Communist Party at the Olympic Bird's Nest stadium in Beijing, China, on June 28, 2021. (Kevin Frayer/Getty Images)
Thinking About China

The Xi-Biden Call: What Needs to Be Said When a Gangster Is on the Line

Francis Ford Coppola’s “The Godfather” has many lessons to teach us about international politics and the U.S. position in the world.

There is a scene where the Don, played by Marlon Brando, and his consigliere, played by Robert Duvall, are discussing the meeting they just had with New York’s five mafia families. The Don reveals that he has just realized that the gang war the Corleone family was fighting with the Tattaglia family was orchestrated by the true power, Barzini.

As the Don dismissed Tattaglia as a “pimp,” the Russo-Ukrainian war was made possible by the pimp Vladimir Putin, but by a true crime boss, Xi Jinping.

Like a crime boss in that great film, Xi is taking advantage of the opportunities provided. While the full attention of the United States should be focused on China, the war focuses U.S. attention on the Tattaglia of international politics, Russia. That alone is value, but is far from the war’s only value to China.

In fact, Russia would employ power if its grand strategic interests were advanced by Putin rather than advancing the folly of the Ukrainian war. The United States is thus faced with the strategic problem of confronting a great power, Russia, while also fighting a peer enemy, China. This is a situation it has not faced since the Cold War.

The crime boss is also laying claim to new territory. According to Chinese accounts of the meeting, Xi stated the need for China to share the governance of international politics. The transit of the aircraft carrier Shandong through the Taiwan Strait is another signal to the United States that the Chinese regime is aggressive and risk-accepting in its competition with America, and is boldly the force for fundamental changes in world politics.

When you are speaking with a crime boss, you need to act accordingly, and heed the lessons taught by Mike Tyson: “Everyone has a plan, ’til they get punched in the mouth.” This is the time for the United States to seize upon the disorder created by the Sino-Russia entente to re-cast U.S. alliances, military forces, and society to meet the threats from these crime bosses.

New Opportunities for US Alliances

Regarding alliances, there is an opportunity to reforge existing alliance priorities and bring those states previously on the sidelines into the fight against China. The United States and its allies must remake the NATO alliance to include the Indo-Pacific as an area of operation.

Immediately deploy U.S., NATO, and other allied forces to Taiwan and India, and naval and air forces to the East and South China seas, and elsewhere in theater. Moving to put teeth into the relationship with India is essential. Similarly, augmenting Japan’s conventional capabilities, and evaluating what role a nuclear Japan might play to help offset the two-front war danger is needed.

The U.S. Marine presence in Australia is important, but U.S. ground forces must also be far closer to China to deter its aggression against India or Taiwan.

This is the time to move to establish cooperation with Vietnam that will permit a U.S. military presence there, to work with Cambodia to move that government away from China, and to shore up the relationship with Thailand, a long-suffering U.S. ally.

Mongolia and the Central Asia states should have the ability to move out of China’s and Russia’s shadow, to become fully independent states.

US Nuclear and Conventional Forces Must Equal the Task

U.S. strategic and military forces are not ready to confront these two formidable threats. U.S. and allied naval forces cannot depend upon their superior quality as it is eroding, but also because numbers matter.

The United States does not possess sufficient naval assets and sealift to meet the threats it faces in all the world’s oceans. Sufficient port facilities around the globe, control of the Panama Canal, and other strategic straits must be secured as they were in the Cold War to permit the U.S. Navy and its allies to transit the globe.

U.S. and allied landpower in Europe and the Indo-Pacific must be strengthened, including the deployment of more light and heavy conventional forces in both theaters. While already present in Europe, tactical nuclear weapons are needed in the Indo-Pacific.

This will require the return of a naval system retired in the Obama administration, TLAM-N, and the development of new tactical weapons to augment the ability of the United States’ deterrence by denial strategy, that is ensuring that the enemy knows its military objectives will not be achieved. If deterrence fails, then tactical nuclear weapons would provide the United States with the ability to fight at a tactical level, that is, on the battlefield, without compelling escalation to the theater or strategic level.

Equally, U.S. and allied airpower must be able to meet the challenge of fighting two major wars at the same time against states that possess world-class air defenses, while U.S. and allied military and civilian space assets must be protected from inevitable attack.

US Politics, Economy, and Society Must Recognize the Enemy

Most importantly, U.S. politics, economy, and society are going to have to adapt as well to the two-front war threat. The Chinese regime has to be seen by the American elite as well as population as the Barzini of global politics who is able to undermine U.S. interests as long as the regime is not recognized as the ultimate enemy, pulling the strings of lesser powers.

The recognition of the Chinese regime as the enemy is still denied by many in American politics, society, education, finance, and media. Unless that changes, U.S. allies and military power will not be sufficient to save the United States.

Ultimately, the dangers present in the new balance of power are the equal of the opportunities. But the Biden administration must act with dispatch to seize the opportunities and meet the challenges posed by the gangsters it now must confront.

If the administration cannot or will not take the lead, then it falls to allied governments, including those in Australia, Japan, Poland, and South Korea, to demand—insistently and persistently—that the United States meets its obligations to confront and defeat the crime families now in control of these great civilizations.