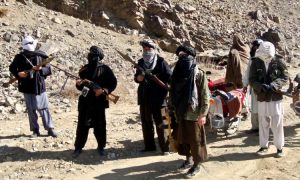 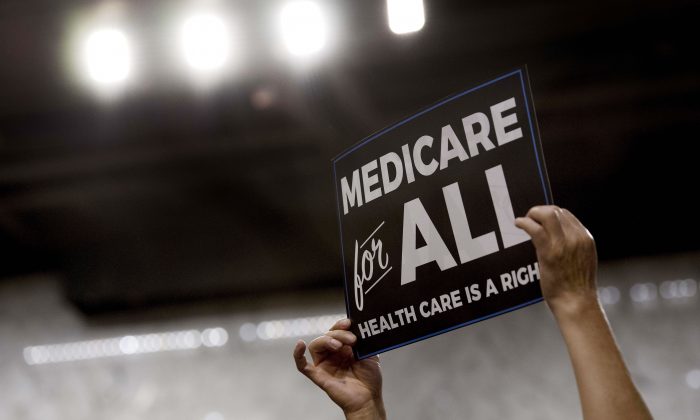 A member of the audience holds up a placard as U.S. Sen. Bernie Sanders discusses Medicare for All legislation on Capitol Hill in Washington, DC, on Sept. 13, 2017. Today, many people are concerned about "rights" to "free" healthcare and other state benefits, but do they come at the cost of true freedom? (JIM WATSON/AFP/Getty Images)
Viewpoints

In a previous article, I described six kinds of freedom. And all my life, I have believed that in a democracy, freedom is the dominant passion of the people. But now I think not.

It is perhaps more correct to say that in modern times, at least, what we observe is a kind of shifting interplay, or a three-way struggle, between different aspects of Will. I think of these as the Will to Control, the Will to Obey, and the Will to be Free. These may be variously manifested in ourselves, in our relations with others, and in the political lives of nations.

The Will to Control is the most obvious. It is expressed powerfully by most of us very early in life. The hysterical, out-of-control child who is actually seeking control of a parent or sibling in order to satisfy a want is the paradigm: hysteria as a form of control.

In the adult, the Will to Control is often the flip side of the Will to be Free, in that none is freer than he who can control his own circumstances and laws. In this last sentence lies the enduring theme and contradiction of all modern democratic theories, however, because obeying a law you make for yourself cannot be called obedience. It is more like a fulfillment of personal ambition.

Indeed, the deepest paradox of modern democratic theory is the idea that we can set up systems for controlling and obeying only our own laws, so that we can be free from others’ control.

This belief persists, despite the fact that many non-democratic regimes have existed throughout history in which citizens were far more free than we are today. For starters, citizens (though not their slaves, who were noncitizens) were freer (less regulated and taxed) under ancient Athenian democracy than citizens of our modern democracies.

Many historians consider the citizens of ancient Rome, especially under the first post-democratic Roman Empire of Caesar Augustus (died A.D. 14), to have been the freest of all.

Those who lived under the British-based modern democracies—such as the United States and Canada—from the mid-1800s to about the middle of the 20th century were also more “free” than we are now. Although they had fewer listed (or newly invented) paper “rights” to brag about, they had more inherited traditional and actionable rights that were assumed by all and protected by powerful custom and common-law precedent.

They also suffered far less taxation and suffocating regulations than we do. Just over a hundred years ago, even the smell of an income tax—or any other tax on labor—was sufficient for citizens to march in the streets crying that they were about to become miserable “tax slaves,” for a tax on goods and imports was considered acceptable, while a tax on labor was considered deeply immoral. But we are all tax slaves now.

In ordinary life, the Will to Control is most visible in the storied career climb to the top, and the general drive for financial success. In politics, it’s embodied in the party organizer and, above all, in the schemer (most politicians in democracies, who must rely on popularity at all costs) who is always ready to manipulate others as a means to some cherished political ambition.

In realpolitik, control-hysteria finds its ultimate expression in pogroms, liquidations, genocides, tortures, and concentration camps. The historical prototype is the tyrant, and—most dangerous of all—the beloved modern dictator, described with such fawning terms as “Redeemer,” “Fuhrer,” or “Duce,” because he has archly—and usually democratically—discovered in the masses a latent Will to Obey.

On that score, we tend to invoke apathy as an excuse for such fawning obedience, as if the apathetic have no will. But on the contrary, apathy is among the strongest expressions of an active Will to Obey in all who deeply yearn to surrender the burdens and responsibilities of control—and especially in those who wish to escape the responsibilities entailed by their own freedom.

In ordinary life, we see this obedience-relief at work in the misbehaving child who in truth is yearning for guidance and so eventually submits to real authority; in the employee who happily performs slavish, even demeaning work in exchange for a mediocre salary and the guarantee of ample benefits; and generally, in all those who seek the peace of security and the avoidance of risk—which is to say, most people.

No one understands this better than the harried control freak who comes to heel the moment he encounters a superior power. He is the type who is—as Churchill put it when describing the authoritarian personality of the Hun— “either at your throat, or at your feet.”

Politically, the Will to Obey is visible in the stunning apathy of the masses, notoriously and dramatically so in the ease with which one camp guard with a cheap pistol can control thousands. Less dramatically, but oh, so prevalently, is the willingness of the masses everywhere to surrender so much in the way of their basic freedoms for welfare, health care, government pensions, and countless regulations and programs designed to control myriad aspects of their daily lives.

In the wake of failing religious belief and moral authority, people look to such redemptive political regimes because they promise a progressive secular salvation. This promise is easily met by leaders who understand the intimate relationship between the Will to Control and the Will to Obey.

The pure Will to be Free is another matter. Though we imagine it the strongest and most noble aspect of Will—and this is certainly true for the very few truly noble people—it is for most the weakest form of Will, trumped everywhere by the desire for control and obedience.

By any fair estimate, only about a quarter of human beings on the planet today enjoy anything close to a “free” society (and, as mentioned, even our “free” democracies are objectively far less free than were the same societies in quite recent times).

Even though we all have tasted the delights of personal freedom, it is usually experienced physically, as a personal indulgence to do or to have whatever we want, however briefly. Or we have experienced it as one of those sweet moments that come after some keen but long-denied satisfaction has finally stilled the yearning soul.

It is no accident that today, when the claims of the body and its appetites trump spiritual concerns, our contemporary clamoring for freedom comes down to a kind of endless striving, not for true freedom and its burden, but for “rights” to sexual pleasures, to abortion, to euthanasia, to “free” medical care, to welfare benefits, and so on—all of which have to do with the wants of, or fears for, our own bodies, but have little to do with the body politic.

Although modern democratic systems begin with the Will to be Free, they can quickly transform into regimes more concerned with Control (by the few) and Obedience (by the rest).

The astute German-Italian sociologist Robert Michels famously argued that all democracies obey an “iron law of oligarchy,” and they all inevitably end as such.

And I have argued in a previous article that the pattern for all Western democracies is something that ought to be called libertarian-socialism, in which the most cherished freedoms are purely individual and private (and to repeat, concern mostly sex and our bodies), while states take up the responsibilities of the broader aspects of our lives (in the form of multilayered government services, benefits, and guarantees for which we “free” citizens are very heavily taxed).

This is so true that the ostensibly free citizen, who in many nations now pays half of his income in taxes of all kinds, in effect works half of every year for the state.

Looking only at the recent history of the moral and intellectual contortions required to justify our underlying ideal of freedom—of control of the free masses by themselves—we may conclude, especially in view of the number of responsibilities and real freedoms we have either spurned or surrendered to the state, that this ideal stands as somewhat of a monument to human cleverness and self-deception.