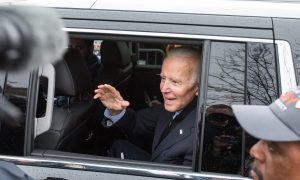 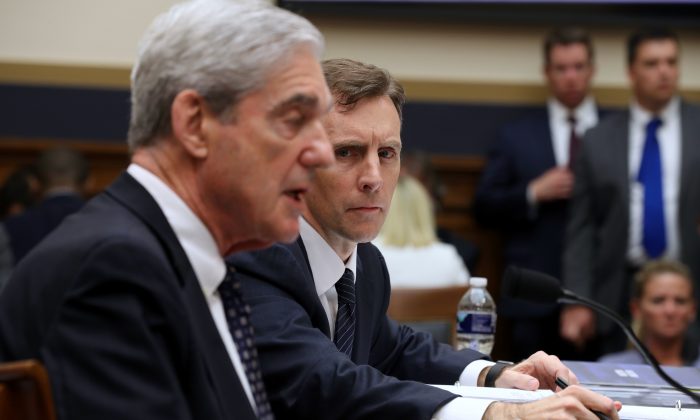 Anyone who watched more than a few minutes of the painful hearings with former special counsel Robert Mueller on July 24 discovered a sad truth the Democrats and many in the media continue to hide: Mueller neither wrote his report, nor did he master the content of it.

Repeatedly during the day, the former FBI director stumbled over what we had been told were his findings. He slowly leafed through a binder, searching for passages that lawmakers were quoting to him, only to say “OK” or “true” when he finally found them.

During the morning’s hearing before the House Judiciary Committee, Rep. Doug Collins (R-Ga.) asked Mueller if “conspiracy”—the criminal law term used in the first part of his report about Russia—and the vernacular term “collusion” were the same thing. Mueller replied, “No.”

Taken aback, Collins asked if he was changing his assertion given in the report, which stated on page 180 that collusion and conspiracy were the same. When Mueller finally found the passage, he withdrew his earlier testimony and stood by the report.

Collins—and frankly, every member of the two committees who questioned Mueller—had the elegance not to state the obvious: Mueller was non compos mentis.

“The term is ‘conspiracy’,” Welch said.

“You help me, I’ll help you,” Welch offered.

Similarly, Mueller drew a blank over the name of Fusion GPS, the company that had hired Christopher Steele on behalf of the Democratic National Committee to produce the infamous “Steele dossier” about Donald Trump.

“When discussing the June 2016 Trump Tower meeting you reference ‘the firm that produced the Steele reporting.’ The name of that firm was Fusion GPS. Is that correct?” Rep. Steve Chabot (R-Ohio) asked.

Mueller said he was “not familiar” with the name.

“It was. It’s not a trick question. It was Fusion GPS,” Chabot said.

There were many other examples, and they were painful to watch.

The conclusion one must draw is significant and far-reaching. The 448-page dossier commonly referred to as the Mueller report was not written by Robert Mueller, nor did the former special counsel apparently review its findings or familiarize himself with the investigation that led up to those findings.

It should be called the “Weissmann dossier,” as it was written by the highly partisan Democratic lawyer and Hillary Clinton supporter Andrew Weissmann.

Weissmann is best known for wildly famous cases of prosecutorial overreach, including his overturned prosecution of Enron officials and the auditing firm Arthur Andersen LLP, which destroyed both firms and put more than 100,000 people out of work.

Defense Attorney Sidney Powell, in her 2014 book “Licensed to Lie,” accuses Weissmann of suborning perjury, something that multiple witnesses in the (newly renamed) Weissmann witch hunt have also accused him of doing.

Jerome Corsi, who is suing Mueller, has said that he rejected a plea deal offered by the special counsel’s office because it required Corsi to lie.

Similarly, The Hill’s John Solomon recently revealed that Weissmann reached out to the U.S. lawyers of Ukrainian oligarch Dmitry Firtash early during the probe in another attempt to suborn perjury. “Give us some dirt on Donald Trump in the Russia case, and Team Mueller might make his 2014 U.S. criminal charges go away,” they said in effect, Solomon wrote.

Weissmann and his team of partisan Democratic lawyers wrote this entire 448-page report with one goal in mind: to provide a road map to Democrats in Congress for the impeachment of Trump.

If you don’t believe that, just tune into any show on MSNBC or CNN. That’s all they’ve been talking about since Mueller’s testimony.

As Rep. John Radcliffe (R-Texas) pointed out in his exchange with Mueller on July 24, this report never should have been written, and if written, should never have been released, because it violates the most sacred U.S. legal principle—namely, that accused persons are innocent until proven guilty.

“I agree that Donald Trump is not above the law,” Ratcliffe said in conclusion. “He’s not. But he damned sure shouldn’t be below the law, which is where Volume 2 of this report puts him.”

Americans should now understand that the so-called Mueller report is a political hit job, not a work of criminal investigation, and as such, it is just a souped-up version of the infamously unverified dossier penned by former British intelligence officer-turned-Democratic Party paid operative Christopher Steele.

Kenneth R. Timmerman
Follow
Kenneth R. Timmerman is a best-selling author, including “ISIS Begins” and the recently released "The Election Heist." He was a member of the national security and foreign policy advisory board of Trump for President and was co-nominated for the Nobel Peace Prize in 2006 with Ambassador John Bolton for his work on Iran.
TOP NEWS