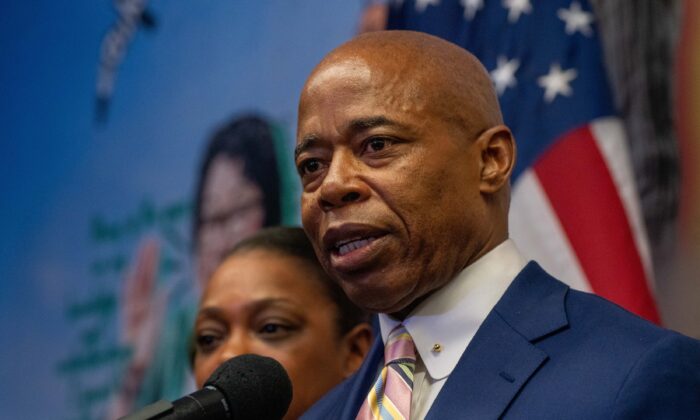 The Way We Live Now

A friend sent me a list of headlines that provide a melancholy glimpse of The Way We Live Now (apologies to Anthony Trollope).

First up, in its latest front in the war against whites, the Biden administration issues “guidance” to give priority for monoclonal antibodies and oral antivirals used to treat COVID-19 based on “race or ethnicity.”

If you’re white, go to the back of the bus.

Is that legal? Who’s asking?

Meanwhile, Eric Adams, the newly elected mayor of New York, has been on a tear.

First, after initially voicing “concerns,” he has decided a measure called “Our City, Our Vote,” which would allow legal non-citizens residing in New York to vote in New York municipal elections.

Is this legal? Probably not.

But again, who’s asking? And more to the point, who is going to stop Adams?

Even Jake Tapper acknowledges that it “makes a mockery” of the idea of American citizenship.

Sure, there are objections. But they look like so many Mexican jumping beans. Frenetic, but impotent.

I suspect that we are going to see a lot of that with Eric Adams.

Nepotism, I know, has a long and storied heritage.

And of course it’s not just nephews (nepos is Latin for “nephew”).

John F. Kennedy appointed his brother to be Attorney General of the United States.

So why shouldn’t Eric Adams appoint his little brother Bernard to be deputy commissioner of the New York Police Department.

The extra $240,000 per annum will doubtless come in handy for the family coffers.

When Eric Adams was running for office, there was hope that he would put the malignant racialist rhetoric of de Blasio administration behind him.

Pragmatism, we were told, was his watchword.

But now we find out that he has appointed his brother to this senior position because he is worried about “white supremacy and hate crimes.”

That is as preposterous as it is pathetic.

But it is all part of the way we live now.

Forget about white supremacy. It will be good to have someone reliable in a senior position of the NYPD since there are certain to be a lot of criminals prowling the streets.

Alvin Bragg, the newly elected Manhattan District Attorney, just announced that he was intending to allow the vast majority of people arrested, even for many felonies, to be released without bail.

Moreover, he does not intend to prosecute many crimes at all.

In memo released shortly after his election, Bragg said that his office will “not seek a carceral sentence” except in cases of homicide, domestic violence felonies, some sex crimes, and public corruption.

“Armed robbers who use guns or other deadly weapons to stick up stores and other businesses,” we learn, “will be prosecuted only for petty larceny, a misdemeanor, provided no victims were seriously injured and there’s no ‘genuine risk of physical harm’ to anyone.”

Remember the “broken windows” policing that Rudy Giuliani implemented with such success in New York in the late 1990s?

That was the approach to policing that intervened to correct all manner of anti-social behavior through vigorous and vigilant policy.

It transformed New York from a crime ridden ghetto in which thugs defaced property with graffiti, mugged people, and burgled homes with virtual impunity.

Giuliani put a swift end to all that.

That whole ethic has been on the wane throughout the de Blasio years. Alvin Bragg just sounded its official death knell.

Under his tenure, “broken windows” policing will be measured by the many windows that are broken because the police are too hamstrung to stop the vandals.

Thank goodness we have the ivied groves of academia to remind us of higher things.

Just a couple of days ago we were greeted by the cheery news that a biological male identifying as a transgender female who had set women’s swim records lost to another transgender swimmer.

University of Pennsylvania’s Lia Thomas, a male pretending to be female, lost to Yale’s Iszac Henig, a female who is “transitioning” to male (but allowed to compete as a woman because she has not yet received testosterone treatments).

It might save bother, and it would go a long way towards saving women’s sports.