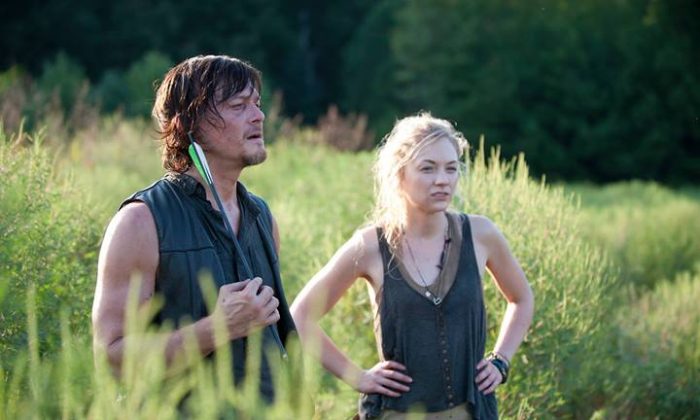 The Walking Dead Spoilers: Will Beth and Daryl Be Reunited in Season 4?

The Walking Dead season 4 is wrapping up, but there’s still three episodes left. Will any of them include Beth and Daryl being reunited?

Lauren Cohan (Maggie) basically affirmed that Beth was kidnapped, which is what it looked like. She said: “there’s not going to be a quick resolve to that situation. It gets very scary. This whole situation that Daryl has found himself in gets really scary.”

Emily Kinney (Beth) was pressed by MTV about the possibility of a Beth-Daryl reunion and even a romance.

“Well, I think it says something about these characters feeling very lonely, and it makes me happy that the audience is sort of picking up on that, that these two people are people that need someone,” she said.

“It makes sense to me that people would hope that each of them would find someone … but yeah, I don’t know what’s going to happen. I do feel like now, after [that] episode, that Beth and Daryl know each other on a much deeper level, in an intimate way. I don’t think they feel alone the way they did before.”

The couples in the show that last a while have been scarce, other than Glenn and Maggie. It would be nice to see Beth and Daryl end up together, although the reactions from the rest of the group (presuming they do all reunite by the end of the season at Terminus) might not be that great.

Kinney insisted that audience members don’t want to know spoilers about what happens.

“No spoilers. You don’t really want to know,” she said. “This whole sitution that they’re in, we don’t know what’s going to happen next. I think [the producers] want the audience to feel that way too. In the dark, walking around, trying to survive, not knowing what is around the corner: we want you to feel the way we feel.”

As for someone getting killed in the last three episodes, that’s still a rumor at this point. It is certainly feasible.

“It comes with the territory,” Cohan said on Bravo’s “What What Happens Live.”

“I mean it’s what makes the show really thrilling and of course I worry about it. I don’t want to go.”

Cohan also told Entertainment Weekly that filming for season 5, which is set to premiere in October, will begin in April–with or without her.