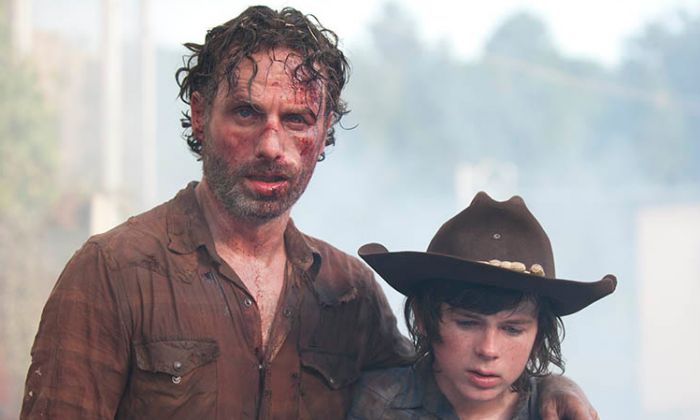 The Walking Dead season 4 is set to continue in February, with hints about what will happen coming out.

Andrew Lincoln (Rick Grimes) has recently dropped some new ones about what will happen during the rest of the season.

Lincoln told Yahoo! that the second half of the season will be dramatically different.

“It spins off into a different orbit, the show, which for everybody concerned has been thrilling,” he said.

“And really, trust me, I think that three of the strongest episodes we’ve done this season are yet to come. Probably four. There are two episodes that I absolutely adore in the back eight, one of which I think is going to be the most controversial episode that we’ve probably ever been involved in, and that’s saying something.”

The new midseason trailer was recently released, sparking speculation that Grimes will die in the second half of the season, though that’s far from guaranteed, and Lincoln made no mention of it, or even anyone dying in general.

In the last episode before the mid-season break (Titled “Too Far Gone”), the Governor convinces the remaining members of the camp to follow him to the prison. While Lilly doesn’t believe him, he tells Lilly that most of the people at the prison are monsters.

The prison gets overrun with walkers as the two groups of survivors fight, with almost a dozen survivors dying by the end of the episode–including the Governor, stabbed by Michonne, and shot in the head by Lilly. Carl and Rick walk away from the prison as walkers move into it.

Lincoln emphasized that the last eight episodes will really be something to see.

“I will stress this as well. You haven’t even seen the half of it yet,” he said. “The back eight is more radical than ever before. It’s almost a tale of two seasons. It really is that radical, the difference between the first eight and the back eight.”