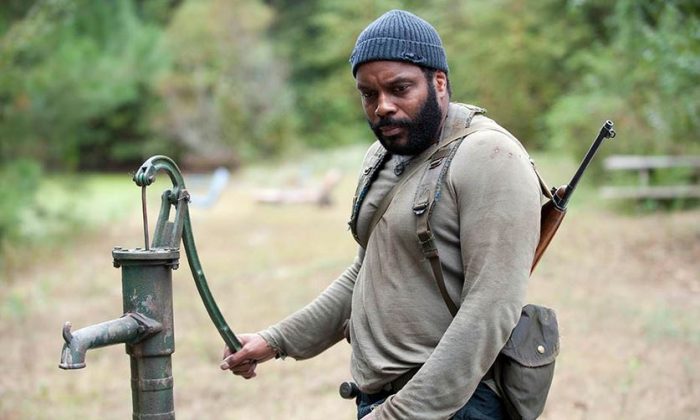 Major spoilers have been coming out about the episode, which is the third to last this season.

As the main trailer shows, the episode focuses primarily on the group of Carol, Tyreese, Lizzie, Mika, and baby Judith.

They are, like many of the other groups, headed to Terminus.

One of the trailers shows Lizzie playing tag with a walker outside of a house, which Pop Dust says is the first scene in the episode.

The show cuts to night when Tyreese and Mika are asleep, and Tyreese is having a nightmare. Carol continues telling Lizzie how she should survive in this world, unlike her daughter Sophia. The next day, she tells Tyreese that she’s worried about Lizzie not understanding walkers but more worried for Mika, who resembles Sophia with her good nature but seeming lack of survival skills.

A little later, Carol and Mika go for supplies while Tyreese, holding Judith, and Lizzie wait on the tracks. A walker approaches them and Tyreese makes a move to kill it, but it trips on the tracks and loses its legs. Lizzie begs Tyreese not to kill it, saying they don’t always need to be killed.

Carol is telling Mika as they walk about Sophia and telling her that people can be dangerous, too, and that someday she’ll have to kill someone. Mika says she can just run away but Carol says that isn’t enough sometimes.

The group meets back up and comes upon a house in a grove, which is quiet and looks peaceful, surrounded by trees with nuts and fruit. They decide to stay there after Tyreese and Carol clear the home. Mika shoots a walker outside while they’re clearing, upsetting Lizzie.

But when Carol tells Mika to shoot a deer, she can’t. Lizzie is soon seen playing with the walker, which Carol puts an end to by killing it. Lizzie, furious, tells Carol that killing a walker is the same as killing a human. Lizzie later goes back to play with the legless walker on the tracks, and feeds a rat to it. She tells Mika that she wants the walker to bite her and wants to become one of them.

Carol and Tyreese later come back to the house to find Lizzie holding a knife standing beside Mika’s dead body. She tells Tureese and Carol that she’s making her sister into a walker and Judith is next. She pulls a gun on them and tells them to let Mika turn. Carol binds Mika and sends the other three into the house, crying over the dead body.

Tyreese and Carol try to figure out what to do with Lizzie. Tyreese holds baby Judith while Carol goes outside to talk to Lizzie. She tells her to looks at the beautiful flowers and shooters her. Tyreese and Carol bury the girls, and Carol later confesses to Tyreese that she killed Karen and David because she was trying to protect the group, and gives him a gun. Tyreese asks her if it was a quick death and Carol says yes.

The next day they continue on their way to Terminus.

Keep in mind this is just from a blog and not necessarily correct. It’s not clear if this entire episode if focused on the group but it appears to be that way.

“If there is one episode of The Walking Dead that you absolutely had to watch this season, it would be this one,” he said. “You kind of have to watch all of them, but it’s going to be a big episode. We’re going to catch a lot of people off guard.”