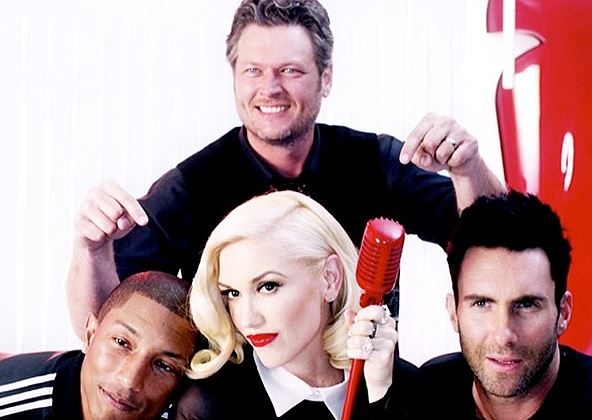 The Voice season 7 is coming up, set to premiere on NBC on September 22.

The competition will be airing on Mondays and Tuesdays at 8 p.m. EDT.

Half of the judging crew is new, with Gwen Stefani and Pharrell Williams coming on board to join Adam Levine and Blake Shelton.

Williams and Stefani are both excited about the opportunity to join.

“This is going to be so fun,” Williams said earlier this year.

Stefani recently shared a picture of herself outside the studio, saying that she’s been “#workingit on the set.”

Usher, Christina Aguilera, and/or Shakira may be back next season.

“I have to prepare my tour, I have to go on tour, I have to be a mom. So many things to juggle, but it’s been a complete blast, an amazing experience. “I might come back. For now it’s just about the music I want to make and promote.”

New pictures have come out showing the judges and their coaches. Stevie Nicks will join Team Adam, Gavin Rossdale will join Team Gwen, and Team Blake will be joined by Phillip Sweet, Kimberly Schlapman, Karen Fairchild, and Jimi Westbrook of Little Big Town.

Each judge uses different things to sell themselves to contestants they want on their team, and new videos have revealed some of the angles Stefani and Williams will use.

Stefani tells one contestant that she has four clothing lines. “Do you like fashion?” she asks.

Williams favorite line appears to be referencing how many artists he’s helped make into stars.

No contestant info has been published as of yet.