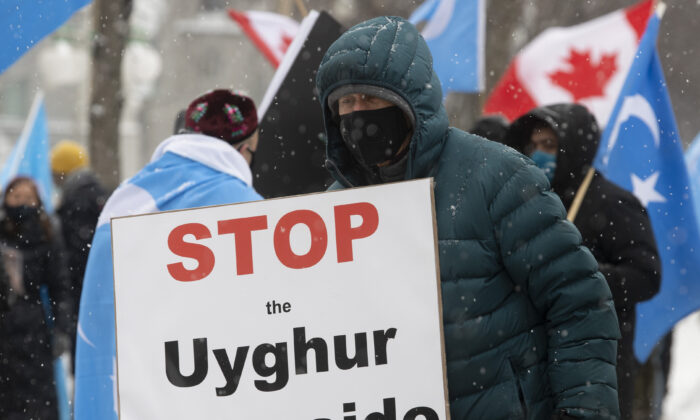 Demonstrators gather outside the Parliament buildings in Ottawa during a protest against Uyghur genocide on Feb. 22, 2021. (Adrian Wyld/The Canadian Press)
Thinking About China

The Uyghur Thorn in the Chinese Communist Side

Try as they might, the CCP can’t hide Uyghur genocide

The approaching Winter Olympic Games scheduled for next month in Beijing provide a continuing spotlight on Uyghur genocide by Chinese communists in Xinjiang.

Several countries, including the United States, have implemented diplomatic boycotts already. The International Olympic Committee has yet to convey how athletes who speak out about Xinjiang during the games will be protected from Chinese retaliation. Meanwhile, Human Rights Watch is cautioning athletes not to mention Uyghur genocide in order to avoid retaliation by Chinese police.

The Chinese regime has been attempting to pacify/conquer/absorb/remake/communize the Xinjiang region since before the 19th century. These days, Chinese state-run media regularly post articles of smiling Uyghurs in ceremonial dress as if to convey their happiness at having their culture bulldozed by the communists in recent years. Never mind the forced labor being used to harvest cotton, as well as the concentration camps being used to “reeducate” the Uyghurs. One wonders what the average Uyghur in a Xinjiang concentration camp thinks about the naming of a People’s Liberation Army Navy (PLAN) 052D guided-missile destroyer after the central city Urumqi. The PLAN destroyer is a symbol of communist Chinese aggression.

Over the past 300 years, the multitudinous Han Chinese have poured into Xinjiang in much the same manner that border-jumpers from all over the world populated the United States’ desert southwest over the past 150 years. Of the approximately 25 million people in East Turkestan/Xinjiang, some 45 percent are Uyghur, 40 percent Han Chinese, 7 percent Kazakh, and the remainder a mixture of ethnic minority groups.

Uyghurs are ethnic Turkmen, their culture is 180 degrees out from their current rulers and are more related to their Central Asian neighbors in the various “stans,” including far-off Turkmenistan. Their religion is Sunni Muslim, now being brutally suppressed by the “invading” Chinese Communist party (CCP). Even their tea drinking custom is observably different from ethnic Chinese, being more akin to the Central Asian and Middle Eastern style.

Much of their culture is derived from ancient Kashgar in the far west of the region. Founded in the first millennium B.C., one wonders at the pressures forcing B.C.-era tribesmen to brave the Pamir Range’s harshness to settle at an oasis of the Taklamakan Desert. How many generations and commingling with other cultures send questions unanswerable albeit ponderable to modern visitors.

Kashgar has a rich history, as described here: “The X-XI centuries … can be called the ‘golden era’ of Kashgar. At that period the city became the capital of the state of the Karakhanids who expanded their power not only in the west of Eastern Turkestan, but also in the territory of Central Asia. Under Arslan Khan from the Karakhanid dynasty, Kashgar became one of the most beautiful cities in Central Asia,” according to Advantour.

Kashgar is home to the Id Kah Mosque—one of the largest mosques in Central Asia and the largest in China. An average of 100,000 Chinese Muslims conduct pilgrimages to the Mosque every year.

The Indo-European people who first inhabited Urumqi some 4,000 years ago settled on the northern slopes of the Tian Shan Mountains until overrun by the Han Dynasty just a century or two before Jesus Christ was born. It is a Han-dominated mixture of peoples. Since 1979, Xinjiang Uyghur Autonomous Region (XUAR) has morphed from an ancient, virtually independent and huge outpost into bustling commercial corridors facilitating China’s New Silk Road.

Urumqi seemingly is considered the terminus of China’s exports to Central Asia and Europe before going south to Gwadar, Pakistan, to sea routes or via the Khorgos Gateway to Kazakhstan and Europe by rail—and points in between. Xinjiang is an important link in China’s New Silk Road—and land bridge to Europe—which is why the CCP is hell-bent on establishing total control over the region in every way.

Many Uyghurs consider calling their region “Xinjiang,” which is Mandarin for “new frontier”—to be a gross insult against their culture and history that predates the Han Chinese aggressors/colonizers by hundreds of years.

Several indigenous separatist organizations, including the East Turkestan Islamic Movement (ETIM), have been seeking to establish a separate political entity in Central Asia. The CCP has been ruthlessly suppressing all such independent political movements under a “terrorism campaign,” especially under current Chinese leader Xi Jinping.

And being far from Western eyes in remote Northwest China, the CCP and its United Front Work Department have been hard at work suppressing the Uyghur majority population and tackling groups like ETIM.

According to a January 2022 report from the Congressional Research Service, the CCP has implemented the following:

Forced assimilation: Beijing has instituted measures to assimilate Uyghurs into Han Chinese society and reduce the influences of Uyghur, Islamic, and Arabic cultures and languages.

Birthrate control: The CCP has carried out a campaign to forcefully reduce birth rates or “illegal births” among Uyghurs.

Mass interment: Between 2017 and 2020, authorities arbitrarily detained between 1 million and 1.8 million Muslims.

Forced labor: Beijing has pressured many Uyghurs, including former detainees, into accepting employment in textile, apparel, agricultural, consumer electronics, and other labor-intensive industries in Xinjiang and other provinces.

Finally, the Newlines Institute for Strategy and Policy, together with the Raoul Wallenberg Center for Human Rights, released a report last March, detailing the Chinese regime’s violation of the 1948 Genocide Convention in its treatment of its minority Uyghur population.

The report documented five acts of genocide committed against the Uyghurs—for each and every one of the five specific genocide provisions in Article II of the Genocide Convention:

Chinese authorities are doing their damnedest to suppress any and all discussion of Uyghur genocide and other “false speculations and rumors” in the run-up to the Winter Games next month. Fortunately, human rights activists, institutions, and some governments are keeping up the pressure on Beijing.

Uyghur genocide should have been sufficient reason for a change of venue, but then the International Olympic Committee is a toothless tiger. What will athletes, companies, and foreign spectators do because the Uyghur genocide continues apace?