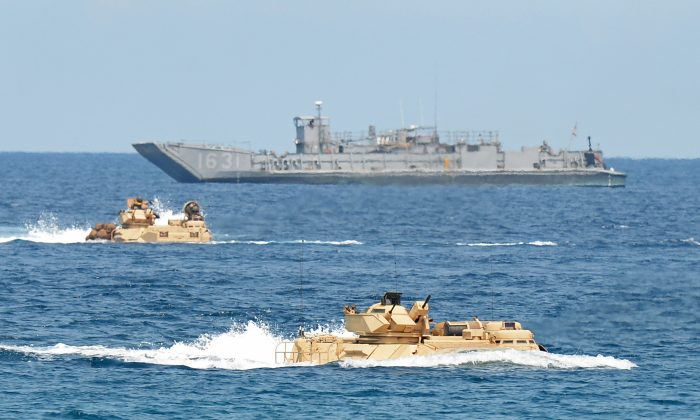 Amphibious assault vehicles of the U.S. Marines speed past a landing ship during an amphibious landing exercise on a beach at San Antonio in Zambales province on April 21, 2015. The exercise was part of the annual Philippine-US joint maneuvers some 137 miles east of the Scarborough Shoal in the South China Sea. (Ted Aljibe/AFP/Getty Images)
Chinese Regime

The U.S. Navy recently sent a carrier strike group to the South China Sea. It was intended as a new show of force against China’s recent efforts to weaponize islands in the region with anti-air missiles, jets, and other systems.

Chinese military hawks are calling for more drastic actions against U.S. freedom of navigation operations—even urging them to ram or fire warning shots at U.S. ships. The Pentagon, meanwhile, is trying to get other countries including India and Australia to also send warships to challenge China’s territorial claims.

According to Steven Mosher, president of the Population Research Institute and a former U.S. Navy officer, the importance of what’s happening in the South China Sea cannot be understated—and while the United States is taking steps in the right direction, it needs to up the ante in the region if it’s going to dissuade the Chinese regime from its ultimate goal.

The U.S. Navy needs to form a coalition, Mosher said. And instead of just sending one U.S. Navy ship here and there to challenge China’s territorial claims, it needs to gather its allies to create a multi-nation flotilla.

The United States needs to gather its allies to create a multi-nation flotilla.

“I think that would help to forestall any aggressive actions on the part of China,” Mosher said in a phone interview, noting it could also serve as the “basis of an Asia treaty organization” similar to NATO.

If this strategy were used soon, he said, it “could bring China to the negotiating table.”

Mosher proposed his strategy during an event at the Naval Sea Systems Command (NAVSEA) Headquarters in Washington in late February, and his plan is well grounded.

The reality is that the Chinese regime is fighting for control of the South China Sea on multiple fronts. It uses its military to press forward, seize territory, and build defenses. But the main tools it uses to ward off other nations are its manipulation of the legal system, and its use of propaganda.

And its main tools for propaganda are its criticisms of the United States as an aggressor and a hegemon.

Mosher said the U.S. Navy needs to avoid turning China’s attempted takeover of the South China Sea into a conflict between the United States and China. He said the Chinese regime would simply use its propaganda to fire back about U.S. interests.

China bullies countries when it feels at a position of strength, but it kowtows when it’s too weak.
— Steven Mosher, president, Population Research Institute

When facing off against other nations, such as Vietnam and the Philippines, the Chinese strategy is based on intimidation.

“We would have seen bloody clashes in the South China Sea already, were it not for the presence of the United States,” he said.

“China bullies countries when it feels at a position of strength, but it kowtows when it’s too weak,” Mosher said.

Mosher also warned that China’s ambitions go far beyond the South China Sea. The ultimate goal of the Chinese Communist Party (CCP), he said, is to replace the United States as the world leader.

The CCP’s goal has become more public in recent years. Michael Pillsbury, a leading adviser to the Pentagon and director of the Center for Chinese Strategy at the Hudson Institute, detailed the CCP’s ambitions and strategy in his 2015 book, “The Hundred-Year Marathon: China’s Secret Strategy to Replace America as the Global Superpower.”

A new world under the CCP’s rule that ‘values order over freedom, ethics over law, and elite governance over democracy and human rights.’

Pillsbury explains this has been the CCP’s goal since its founding years under Mao Zedong, and while it used to keep this goal under a veil of secrecy, it has recently come to the surface.

A 2009 book from a colonel in the CCP’s People’s Liberation Army (PLA), “The China Dream,” is one of many examples Pillsbury gives, noting the colonel “alludes to the importance of studying American weaknesses, and preparing to hit the Americans once the West becomes wise to China’s true game plan.”

Pillsbury also notes a 2005 Chinese piece that calls for a new world under the CCP’s rule that “values order over freedom, ethics over law, and elite governance over democracy and human rights.”

Mosher has come to similar conclusions about the CCP’s ultimate goal, and was among the first scholars to warn about it with his 2000 book, “Hegemon: China’s Plan to Dominate Asia and the World.”

All the things we’ve built over the centuries, the CCP would roll back.
— Steven Mosher, president, Population Research Institute

He said that in 1958, Mao Zedong said that as soon as the CCP becomes strong enough, it would “establish an earth control committee.”

“What does that mean? That’s means what it says,” Mosher said. ” China, when it becomes politically and militarily powerful enough, Mao wanted to reach out beyond China and control the rest of the world.”

The South China Sea is one key piece in this push. Many defense experts have warned that China is trying to establish an “anti-access, area denial strategy” that would allow it to form a defensive ring around China, and keep other nations—particularly the United States—at a safe distance militarily.

The CCP is already well on its way into this strategy, and Chinese military hawks are speaking about it openly.

South China Morning Post reported on Feb. 28 that “China’s military is prepared ‘to defend sovereignty’ in the South China Sea.”

Chinese Maj. Gen. Qiao Liang, a professor at the PLA National Defense University made this even more clear in a recent op-ed published in China Military Online, the official mouthpiece of the PLA.

“To effectively contain the United States, other countries shall think more about how to cut off the capital flow to the United States while formulating their strategies,” Liang wrote, noting the strategic importance of controlling key shipping lanes such as the South China Sea.

“That’s the way to control America’s lifeblood,” he wrote.

According to Mosher, a world with the CCP as the leading nation is a frightening thought.

“The same party that imprisons members of the Falun Gong and Christians, oppresses Tibetans… that same government is going to behave the same way externally as it does internally,” he said.

“I’ve always been in favor of having correct relations with China,” Mosher said, noting this does not mean catering to its interests, but instead maintaining our moral integrity while dealing with it.

“We should have proper relations with China, where we understand exactly what the Chinese Communist Party is and we know what it does to the Chinese people,” he said.

He noted that Chiang Kai-shek, a leader of the Kuomintang and a leader of the Republic of China between 1928 and 1975, said in the time of World War II that the Japanese would eventually leave China, but said the CCP was a disease of the heart.

Mosher said he agreed with this impression of the CCP, and said its interests would be to press its own form of governance abroad—something that would drag the world order away from human rights and democracy.

“All the things we’ve built over the centuries,” he said, “the CCP would roll back.”