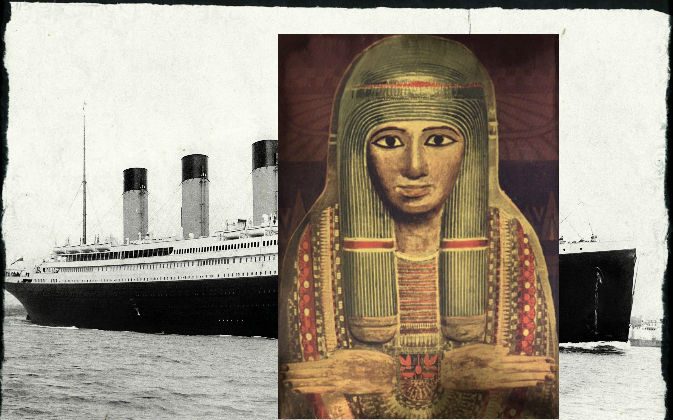 Strange occurrences have been said to eddy around an ancient Egyptian artifact, known as the “Unlucky Mummy,” since it was taken from Egypt to Europe in the 19th century. Some of these stories are certainly myth, but some were allegedly verified by a journalist of the early 20th century.

This journalist, Bertram Fletcher Robinson, purportedly spent months investigating and verifying the truth of tragedies related to the artifact. Before he could complete his work, Robinson suddenly died.

Was it the curse of the Unlucky Mummy?

Sir Arthur Conan Doyle thought so, as did some of Robinson’s other acquaintances. Doyle’s remarks on Robinson’s death and Robinson’s research were recorded in the publications Pearson’s Magazine and the Daily Express, both operating under the same owner.

Robinson had begun his investigation of the mummy with hopes to write a column for the Daily Express dismissing the legends. But he reportedly discovered the legends were true. The articles were compiled and quoted in articles by BFRonline, an organization that undertakes research projects into all aspects of the life and work of Robinson (1870–1907), who was also a noted literary figure, politician, and sportsman.

Doyle said of Robinson’s death: “It was caused by Egyptian ‘elementals’ guarding a female mummy, because Mr. Robinson had begun an investigation of the stories of the mummy’s malevolence. It is impossible to say with absolute certainty if this is true … but I warned Mr. Robinson against concerning himself with the mummy at the British Museum. He persisted, and his death occurred … I told him he was tempting fate by pursuing his enquiries …The immediate cause of death was typhoid fever, but that is the way in which the elementals guarding the mummy might act.”

The history of this artifact (which is not actually the entire mummy, but rather the mummy’s case lid) was recounted in the August 1909 edition of Pearson’s Magazine. All facts were said to have been painstakingly verified by Robinson.

It was discovered in Egypt by an Arab who sold it to a Mr. W at a party organized by a “well-known English lady of title.” The mummy’s case was described in the magazine: “It was seen to picture a woman’s face, of strange beauty, but of a cold malignity of expression.”

“On the return journey of the party, one of the members was shot accidentally in the arm by his servant, through a gun exploding without visible cause. The arm had to be amputated. Another died in poverty within a year. A third was shot. The owner of the mummy case found, on reaching Cairo, that he had lost a large part of his fortune, and died soon afterwards. …

“When the case arrived in England, it was given by its owner, Mr. W., to a married sister living near London [BRFonline speculates that this may have been a woman by the name of Ms. Warwick Hunt]. At once, misfortune fell upon her household; large financial losses were suffered, bringing other troubles with them.”

A photographer who photographed the case and claimed that he’d captured a living woman’s face on the film is said to have died shortly afterward. The artifact’s owner gave it to the British Museum where it was housed when Robinson studied it, and where it remains to this day.

All of these stories rest on the investigation of a man now long dead and on the reporting of two publications operating under the same owner. If true, the tale is uncanny indeed. The rumors that have sprung up around this vestige of an ancient priestess since Pearson’s 1909 magazine article may be more easy to dispel.

The Unlucky Mummy was said to be aboard the Titanic when it sank, and to be responsible for the tragedy.

Barbara Mikkelson of Snopes.com researched the history of this legend and concluded that the mummy case had never left the British Museum and the rumor started with journalist William Stead and another man named Douglas Murray.

Stead and Murray had told a story of a mummy brought to a friend’s house. The spirit of the mummy had purportedly destroyed everything breakable in the house and brought illness and misfortune to those in contact with it. They later saw the mummy case at the British Museum, the same artifact investigated by Robinson. They said the face depicted on the case looked tormented and that the priestess’ spirit was a malignant force loose in the world.

Stead was a passenger on the Titanic and went down with the ship. A survivor recalled, in an interview with New York World, the story of the cursed mummy as told by Stead to his fellow passengers while on the Titanic.

Eventually, explained Mikkelson, the story of the cursed mummy, the case at the British Museum, and the Titanic all got jumbled into the same legend.