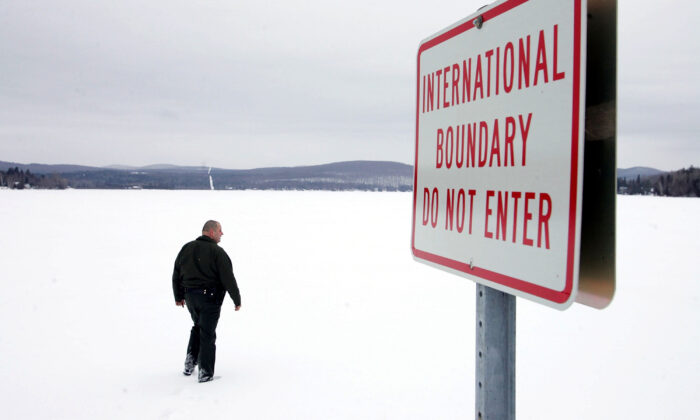 U.S. Border Patrol Agent Andrew Mayer walks onto a frozen lake during a patrol on the lake that is split between Canadian territory to the right and the U.S., near Norton, Vermont, on March 22, 2006. Joe Raedle/Getty Images

Canada to our north occasionally becomes annoyed with us, sometimes for good reasons, sometimes not so much, usually over trade issues, but there hasn’t been a need to defend the border for a long time.

Canada has always been a peaceful country with a pretty laid back population. A great place to go out for a beer.

Now, however, Canada has among its population thousands of radical Islamists and ex-ISIS fighters, which some experts have said could be a threat to the United States, as well as Canada.

Canada’s immigration policy under Justin Trudeau’s government was from January 2017 to November 2019 run by his Somali-born immigration minister, Ahmed Hussen. In November 2018, Hussen announced that the new target number of migrants would be 350,000 in 2019, increasing annually, with the aim of bringing in 1 million people over three years. This goal has been easily met—during a single quarter between July 1 and Oct. 1, 2019, there were 186,189 migrants brought in.

Canada has plans to resettle around 50,000 refugees and asylum seekers each year—many of them coming from the Middle East and Africa.

The entire population of Canada is almost 38 million, and this influx is a major change and significant to the future of Canada. Islam is the fastest-growing religion in Canada.

As we have seen in many Western European countries, the Islamic migrants tend to live in enclaves, which grow with the steady flow of new arrivals. Certainly, grouping together is a normal human behavior as old as mankind building cities. However, in the Islamist communities you also see the growth of Sharia law, Sharia courts, neighborhood compliance patrols, etc. These have come to be known as “no go zones” and are found in countries such as France, Britain, Sweden, and Germany, as well as others.

The existence of these enclaves is obvious and out there for anyone to confirm. The controversy is over how much control the host governments exercise inside the no go zones. There’s extensive documentation that in certain well-established no go zones, the host government doesn’t exercise any sovereignty whatsoever. Naturally, the governments in question push back heavily on this issue. Who can blame them. If it’s true, to admit they have completely lost control over sections of their country would be political suicide.

However, this political back and forth is largely a war of words and semantics. The simple truth is that there are enclaves—growing in number and size—fully dominated by the local Muslim population whether the host country police force patrols the neighborhood or not. Various of those enclaves have been used to recruit for terrorist groups and to stage terrorist attacks in Europe. The documentation, court convictions, and successful terrorist attacks all prove this point is unassailable when you limit the conversation to facts alone.

A clear-thinking terrorism expert in Canada, David Harris, has long warned that this is exactly what is happening in Canada today, particularly now as a result of the immigration policies implemented by Trudeau and Hussen.

Harris formerly worked for the Canadian Security Intelligence Service (CIA equivalent) and told CBN News, “Many years ago I suggested that many of the Islamist extremists might regard Canada as an aircraft carrier from which to maintain operations against the United States.” Harris concluded that it was “only a matter of time” before Muslim extremists based in Canada launched a major attack on the United States.

Prime Minister Trudeau told The New York Times shortly after being elected, “There is no core identity, no mainstream in Canada.” I personally would beg to differ. While only anecdotal, I’ve been to Canada many times, and in every case the people have been uniquely Canadian.

That said, Prime Minister Trudeau would also have been making the point that a lack of a core Canadian identity would be a desirable end state, and what better way to achieve that goal than to import a completely different culture that doesn’t assimilate—particularly if that new culture would overwhelmingly vote for Trudeau well out into the future.

In 2017, the Canadian Parliament also passed a motion (M-103) that condemned Islamophobia and religious discrimination, although no other religions, such as Christianity, were mentioned. A poll showed that 71 percent of Canadians would not have voted for the motion, but it passed Parliament overwhelmingly because of Trudeau’s Liberal government.

The motion required the government to condemn Islamophobia, but nowhere did it actually define what constitutes “Islamophobia.” It also called for a study into how to combat Islamophobia and to contextualize hate crimes.

Fears were that it would quickly morph into something where if you criticize anything at all related to Islam, you’re only doing it because you’re a racist Islamophobe. Legislation might follow that would make it a criminal offense.

So far it hasn’t. But the way Canada is headed, not only will it no longer be a nice place for a beer, it will be illegal to buy beer in Canada.