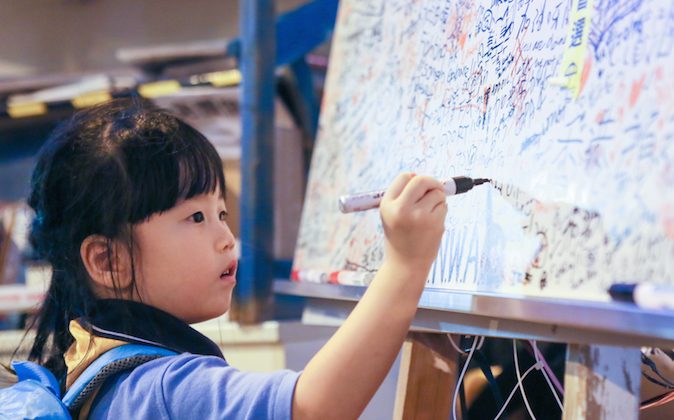 A little girl draws on a whiteboard that is filled with messages of hope and peace at what protesters are calling "Umbrella Square," in the Central District of Hong Kong, on Nov. 1, 2014. (Benjamin Chasteen/Epoch Times)
China

Umbrella Movement Could Be Hong Kong’s Wind of Change

HONG KONG—Like thousands of young people from all over Hong Kong, secondary school teacher Li Hiu Fung had come out to the streets of this anxious city every night to demand that his government give him a real voice in choosing his leaders. He helped build a sprawling protest camp on one of the city’s busiest thoroughfares.

After more than a month in which scattered pro-democracy protests coalesced into an unprecedented social movement, that demand has gone unmet. Beijing has not budged an inch. But Li is looking ahead.

“Some say the Communist Party has lost this whole generation in Hong Kong,” Li predicted as he watched the nightly swirl of speeches and live music at the main downtown protest site. “This political movement has been consolidated in our own minds. A whole generation has learned how to speak out.”

Even as protesters remain locked in a week-long stalemate with city officials over demands for electoral reforms, political analysts say this 7.2 million-person financial capital could be seeing the birth of a newly awakened generation that will continue demanding democracy and take to the streets to push for it.

Known to some as the Umbrella Movement, after the umbrellas demonstrators used to ward off tear gas, the protests have already become the largest and most protracted ever seen since the city’s founding more than 170 years ago. For most of its history, Hong Kongers have focused more on business than politics as they lived first under colonial British, and then Communist Chinese rule.

The agreement in which China took control of Hong Kong in 1997 calls for elections in Hong Kong beginning in 2017. China says an exclusive committee will screen candidates for the city’s top leader, but the protesters are demanding open nominations to give voters a chance to elect a chief executive who is not necessarily pro-Beijing.

The debate over Hong Kong’s political future has become an obsession for a once apathetic younger generation already nervous about growing up in an increasingly unaffordable and economically polarized city.

Keeping the movement’s momentum going after the barricades come down — whenever that happens — will require pushing more of its young leaders into legislative offices now held by veterans of Hong Kong’s pro-democracy parties, said Joseph Cheng, a political science professor at the City University of Hong Kong and the convener of a coalition pushing for democratic reforms.

He said building on the protests will also require a long-term fight, in the face of a hardening line by central Chinese authorities.

“These groups are going to need more coordination,” Cheng said. “And the traditional pro-democracy parties may have less room and less of a role.”

Support for the protest movement has been growing despite anger from some in the city about disruptions to businesses and commutes.

A poll conducted Oct. 8-15 by the Chinese University of Hong Kong found that 38 percent of Hong Kongers supported the protests, up from 31 percent in mid-September, before they began. Opposition dropped from 46 percent to 36 percent.

Young people are more united. The same poll found that more than 60 percent of city residents ages 15 to 24 support the protest; just 8 percent oppose them. The October poll, conducted when tensions between protesters and authorities were particularly high, surveyed 802 people and had a margin of error of 3.5 percentage points.

Willy Lam, a political analyst at the Chinese University, said the protests have changed the political calculus by adding the ever-present threat of civil disobedience and organized protest groups.

“This is a game-changer because the DNA of Hong Kong has changed,” Lam said. “For the first time since Hong Kong was founded in 1840 … you have a mass movement led by the students.

“What the Hong Kong administration is most fearful about is that now the students and the other citizens are not afraid of the police.”

Student leader Lester Shum framed the protests in similar terms during a televised Oct. 21 debate between protest organizers and city officials. His voice rising in intensity, Shum proclaimed the arrival of “a generation who have suffered from tear gas.” Thousands of demonstrators watching on giant screens at the main protest site erupted in applause.

Ryan Cheung, a 33-year-old social worker, said he sees this as Hong Kong’s last chance for democracy as central Chinese government officials push for more influence in the semi-autonomous city.

“We see China will eventually take control of Hong Kong,” Cheung said. “The younger generation, we see this everywhere, but we won’t give up because this is our future.”

Economic pressures have added to such worries. The annual Demographia housing affordability index ranked Hong Kong this year as the world’s least affordable housing market, with median home prices 15 times that of the median annual salary.

Tsang Ka Yuen, a 67-year-old protester, said his son has held off on starting a family because of the city’s rising primary school tuitions.

“All my children are here in Hong Kong, but how can they live here?” asked Tsang, a security guard. “I’m thinking of the younger people who have to build lives here. I want to give them a better city.”

Some other older Hong Kong residents said they doubt the protesters will ever win concessions from a Chinese government that has only tightened its grip on power.

Andy Lee, a 57-year-old insurance agent, said he supports the students’ cause in principle, but added, “I don’t see real results coming from this.”

“They can express themselves, but up until now, I don’t see how they reach their goals,” he said.

Business student Ken Lum said he is aware of the long odds the movement faces, but he had already surprised himself with his own perseverance. He has stayed on the streets for more than a month.