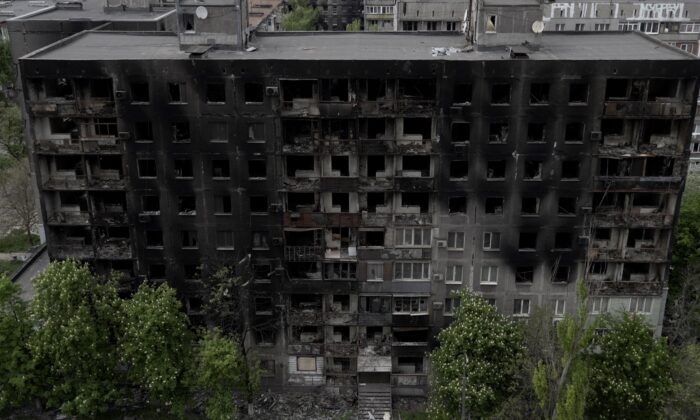 A view shows the city of Mariupol amid the ongoing Russian military action in Ukraine on May 10, 2022. (Stringer/AFP via Getty Images)
Viewpoints

The Ukrainian Conflict: Are the US and NATO at War With Russia? Is There an End in Sight?

The war in Ukraine is about to enter its third month. To date, the outcome has surprised both the military pundits and the public at large. Is there an end in sight, and, if so, what form might a conclusion to the Ukrainian war take?

The Ukrainian War So Far

The initial Russian invasion plan relied on the projection of what the Kremlin believed was overwhelming military power to crush Ukrainian military forces, force Volodymyr Zelenskyy’s government to abandon Kyiv and flee to safety, and pave the way for a “national unity government” to quickly negotiate a ceasefire and subsequent peace treaty with Russia.

That plan failed on all fronts. The Zelenskyy government did not flee but instead rallied its citizens and world public opinion to resist the Russian invasion. The Ukrainian military successfully blunted the Russian advance, eventually prompting the Kremlin to abandon its plans to seize control of Kyiv, the country’s capital.

After initially appearing reluctant to support Kyiv in a meaningful way or impose harsh sanctions on Russia, Western governments, prompted by widespread public anger at the invasion, reversed course.

They are supplying billions of dollars in financial and military aid to the Zelenskyy government and imposed harsh, wide-ranging sanctions on Russia and its leadership class. Those sanctions targeted the so-called “oligarchs” that control much of the Russian economy, government institutions, as well as key financial and industrial companies. Most importantly, the European Union (EU), Russia’s largest market for its hydrocarbon exports, resolved to wean itself off its dependency on Russian energy.

Russia has since revised its military strategy—focusing on two key objectives. First, to seize as much of eastern Ukraine, the region east of the Dnieper River, and especially as much of the Donbass area as possible. Second, to create a Russian-controlled corridor from Russia to the Crimean Peninsula, as well as seize control of Ukraine’s Black Sea coast and its principal port cities.

The results have been mixed. The offensive in the east has stalled. Russia has secured a land corridor to Crimea. It has isolated and largely destroyed the port city of Mariupol, although a determined Ukrainian resistance at the city’s giant Azovstal steel plant is continuing. Most of Ukraine’s Black Sea coast from Kherson to Mariupol is under Russian control, but the southwest corner and Odessa, Ukraine’s key Black Sea port, remain in Ukrainian hands.

Washington has significantly increased the scope and sophistication of the armaments it supplies Ukraine. The latest military aid—90 M777, 155mm towed artillery along with over 180,000 rounds of ammunition, as well as 14 counter artillery radar—has been largely delivered, according to the Pentagon. Ukrainian soldiers are being trained in Germany on operating the artillery by units of the Canadian Armed Forces and the Florida National Guard.

Given Russian dependence on Ukraine’s road network to move their forces, the howitzers will prove very effective in attacking troop concentrations. More importantly, the counter artillery radar allows Ukrainian forces to immediately respond to Russian artillery and rocket attacks by targeting their launchers. The M777 will also be critical in the event of a Ukrainian offensive and represent the most significant “offensive” weaponry supplied to date by the United States.

The White House has also re-launched the World War II-era Lend Lease program and will “lend” to Ukraine up to $33 billion of U.S. military equipment.

The United States has also been sharing real-time military intelligence. Russian military communications have been regularly intercepted by American intelligence agencies and have allowed Ukraine’s military to target Russia’s top field commanders. To date, 12 Russian generals on the front line have been killed.

Ukraine: What Happens Next?

The scope of U.S. and NATO support for Ukraine’s military begs the question: are the United States and NATO effectively at war with Russia using Ukrainian proxies as front-line troops?

Secretary of Defense Lloyd Austin’s declaration that the United States “wants to see Russia weakened” and that the West will “keep moving heaven and earth” to arm Ukraine, along with widespread calls by prominent U.S. politicians, particularly from Speaker of the House Nancy Pelosi to continue assisting Ukraine “until victory is won,” have increasingly portrayed the war as a U.S.-Russia conflict.

The White House has been vague about its definition of victory. Zelenskyy, however, has been very clear in defining “victory” as the complete expulsion of Russian military forces from Ukrainian territory, including the areas seized in 2014.

In a significant break from the U.S. position, British Foreign Minister Liz Truss has seconded Zelenskyy’s objectives stating that the British government “will keep going further and faster to push Russia out of the whole of Ukraine, including Crimea and Donbas,” The Washington Post reported.

The Ukrainian war will likely continue if the U.S. and NATO support the Zelenskyy government’s war aims. It will force Russia to commit more military forces, declare a partial or full mobilization of reserves, and possibly, even formally declare war on Ukraine.

For the Kremlin, expulsion from the territories it seized in 2014 would constitute an existential threat. A military escalation would also precipitate additional sanctions.

Moscow might also choose to expand the conflict by invading one or more neighboring countries, particularly one of the Baltic states. It has already threatened to seize Moldova’s breakaway province of Transdniestria—a region controlled by pro-Russian elements. Moldova is not part of NATO, but a seizure would bring on another round of sanctions against Russia.

An attack on the Baltic states would, however, require NATO members to respond militarily. In the long term, Russia would not win a war with NATO. But in the short term, NATO is not prepared for a war with Russia, either politically, psychologically, or militarily.

The Kremlin might use such an escalation, or at least the threat of one, to force a negotiated settlement in Ukraine. Notwithstanding widespread public support for Ukraine, that support is likely to be considerably tempered if it leads to war between NATO and Russia and the risk of a nuclear conflict.

The strategy of “escalate to de-escalate” has been described by military analysts as indicative of the  Kremlin’s brinkmanship style. However, the term or strategy does not appear anywhere in Russian military writings or stated doctrine.

However, Moscow has frequently dropped hints about the risks of nuclear conflict. Russian Foreign Minister Sergey Lavrov, for example, has repeatedly pointed out that the conflict in Ukraine could escalate into a third world war, noting, “The danger is serious, real. And we must not underestimate it.”

The United States and NATO have ignored Russian threats of a nuclear escalation. Russian use of theater nuclear weapons would serve little military purpose and would bring widespread public condemnation and additional rounds of sanctions from the West.

The other likely alternative in the Ukrainian war is that the Kremlin simply announces that it has accomplished its goals in Ukraine and declares the end of military operations. In this scenario, it would retain any newly conquered territories, regardless of whether it formally annexes them or not.

The Zelenskyy government would not support such a de facto settlement. Certainly not one that leaves Moscow in control of large areas of Ukraine, especially if those areas include Ukraine’s Black Sea coast and the economic and militarily strategic port city of Odessa. Such a move would cripple Ukraine’s economy, depriving it of its ability to export its goods, in particular its agricultural production.

Whether Ukraine could continue the war in the event of a Russian ceasefire, much less go on the offensive, will depend on the willingness of the U.S. and its NATO allies to continue to support the Zelenskyy government’s war aims.

There is also the larger question of who will pay for rebuilding a war-ravaged Ukraine. That cost will, at a minimum, amount to hundreds of billions of dollars. A recently proposed EU plan called for more than a trillion dollars in grants and loans through a contemporary “Marshall Plan”-type effort to rebuild the country. While the United States and the EU will contribute to the rebuilding costs, funding Ukrainian reconstruction is neither politically nor economically feasible for the United States or the EU.

Expropriating the hundreds of billions of dollars in frozen Russian central bank assets, as well as the assets of Russian oligarchs and Russian state institutions, would go a long way in funding the cost of rebuilding Ukraine. EU Chief Charles Michel has already proposed that seized Russian assets should be earmarked to rebuild Ukraine. It’s not clear if there is a legal basis for doing so. The prospect of losing those assets, however, might well compel Moscow to continue the conflict.

The likelihood that territorial concessions to Russia would result in a quick resolution of the Ukrainian conflict was once considered a viable option. Indeed, that was one reason why the West was initially reluctant to arm Ukraine. Such an alternative seems unlikely now, even if Russia was to unilaterally declare its war aims achieved and announce a ceasefire.

There is little appetite in the West for a “Munich”-type solution. It’s unlikely public opinion would stand for it. Moreover, the cost of rebuilding Ukraine, and the question of how that will be paid for, will likely spark renewed conflict with Moscow.

For now, it seems there is little prospect that the war in Ukraine will end soon. Indeed, escalation and potentially an expansion to include other states are more likely than a quick resolution.