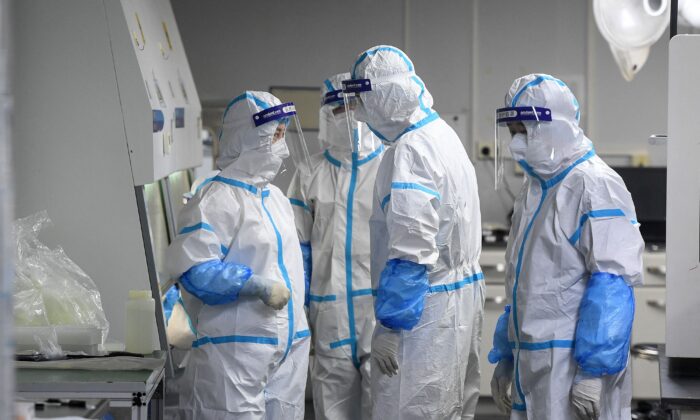 Laboratory technicians wearing personal protective equipment (PPE) working on samples to be tested for the COVID-19 coronavirus at the Fire Eye laboratory, a COVID-19 testing facility, in Wuhan in central China's Hubei Province on Aug. 4, 2021. (STR/AFP via Getty Images)
Viewpoints

The intelligence community (IC) recently declassified the detail backing its predictably inconclusive, highly equivocal analysis of the Chinese coronavirus’s origin. Remarkably, the sole point on which intelligence officials seem confident—that COVID-19 was not a bioweapon, the most disturbing theory of all—is the one on which they provide the thinnest, weakest, and most oddly-approached argument. To point this out is not to endorse the bioweapon theory, but to call into question the rigor of the intelligence community’s (IC) analysis.

According to the newly-released analysis, the “IC assesses China did not develop SARS-CoV-2 as a biological weapon.” It provides one bullet-point to justify this position, claiming that bioweapon allegations are rooted in “scientifically invalid claims,” and that proponents lack “direct access to the Wuhan Institute of Virology,” or “are suspected of spreading disinformation.”

Two of these three points do not actually refute the claim. They merely call into question the credibility of the claimants. One only counters the claim vaguely.

The IC points readers to an annex for further reading wherein the IC, in an apparent bid to bolster its case, combats the argument of a single unnamed Hong Kong virologist, who worked in a WHO-affiliated lab. Said virologist, presumably Dr. Li-meng Yan, contends that the coronavirus was a bioweapon created by Beijing and intentionally released by researchers. Analysts write that this doctor’s view is: “inconsistent with available technical information on coronaviruses … [and] that … [her] articles contain several technical inaccuracies and omit key data points …. The scientific community did not peer review these articles and some publicly rejected the articles’ claims as scientifically unsound.”

This is the entirety of the IC’s public case against the bioweapon theory.

Now, all else being equal, the inherent riskiness and unpredictability of a bioweapon gambit logically would make it an unlikely explanation.

And those U.S. government officials with even the most hardened and cynical view of the ruling Chinese Communist Party (CCP) have never marshaled evidence for it. Perhaps the closest the federal government has ever come to implying that there might be anything malicious behind the coronavirus’s origin was a portion of the Trump State Department’s January 2021 fact sheet. It raised the point that “Secret military activity” at the Wuhan Institute of Virology merited greater scrutiny, invoking “concerns about China’s past biological weapons work,” and noting that WIV had “collaborated on publications and secret projects with China’s military.” This work included engaging in classified research on behalf of the Chinese military since at least 2017, some of which involved laboratory animal experiments.

It may well be that the evidence of the Chinese coronavirus’s natural origin or lab leak is far more compelling.

It may well be that the IC’s summary statement that most analysts assess that the Chinese coronavirus was not genetically engineered, and that “Chinese officials probably did not have foreknowledge” that it existed before its outbreak, indicate the bioweapon theory is bunk..

But the IC does not state it explicitly. It is silent on the points raised by the Trump State Department. It does not rule out the bioweapon theory by addressing the basic questions it ought to have considered such as:

Maybe the IC is sitting on a much deeper analysis eliminating the most malicious theory. But if so, it has not shown it to the world.

It may well be that the IC believes that the bioweapon theory is so far-fetched and outlandish on its face that it is not even worth legitimizing or entertaining. Prior to its 90-day review back in May, it had already prejudged that the two most plausible theories were lab leak or natural occurrence, and it clearly directed its focus to those two theories.

This may all be reasonable.

But it is also reasonable to ask why it chose to make the case against the bioweapon theory in such an indirect, and therefore unpersuasive fashion.

Combined with other intelligence failures on measures large and small, and former Director of National Intelligence John Ratcliffe’s assessment that the IC had taken a politicized approach to China on another sensitive issue, the IC’s analysis becomes more questionable. One would think it would have wanted to have more persuasively dispelled this theory given the disinformation concern it raised.