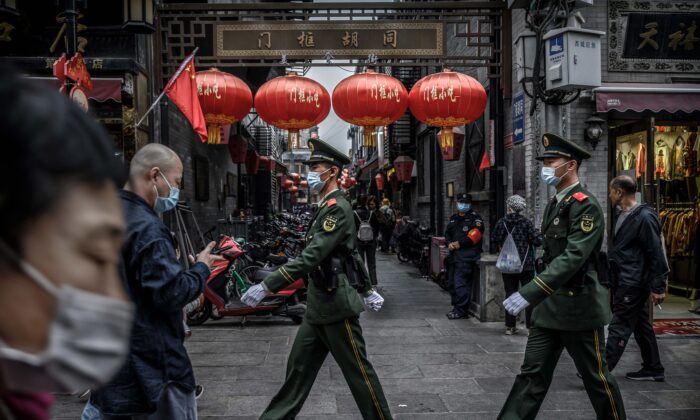 Chinese police patrol as tourists walk in a busy shopping area during the final day of the Golden Week holiday in Beijing on Oct. 8, 2020. (Kevin Frayer/Getty Images)

The intelligence community’s (IC) recently declassified non-assessment of the origins of the Chinese coronavirus should be seen as part of a continued charade by the Biden administration that—in effect—protects communist China.

It enables Team Biden to present the appearance of concern over China’s malign behavior while absolving itself of any responsibility to forthrightly confront it.

More than a year and a half after the coronavirus began spreading, the IC declared that it “remains divided on the most likely origin of COVID-19. All agencies assess that two hypotheses are plausible: natural exposure to an infected animal and a laboratory-associated incident.”

This conclusion seemed almost preordained. The Office of the Director of National Intelligence released a highly reminiscent statement on May 27, just after President Joe Biden called for the 90-day review into the origins of the coronavirus, asserting, “The U.S. Intelligence Community does not know exactly where, when, or how the COVID-19 virus was transmitted initially but has coalesced around two likely scenarios: either it emerged naturally from human contact with infected animals or it was a laboratory accident.”

As then, in the final assessment, different agencies gave different weights to these hypotheses.

The IC claimed it couldn’t provide a more definitive conclusion without better clinical samples and the like, and that “China’s cooperation most likely would be needed to reach a conclusive assessment.”

Interestingly, but perhaps unsurprisingly, the IC was only unequivocal on the most provocative thesis regarding the origin of the coronavirus: “We judge the virus was not developed as a biological weapon.” Chinese officials, per the IC, had no “foreknowledge of the virus” before the initial outbreak of COVID-19 emerged.

The report, in short, generated precisely the answer one would have expected from increasingly hyper-politicized bureaucracies keen to hedge on vital questions—and likely even more so given the geopolitical implications at play—when seeking out sensitive information from a closed country in which they lack visibility, where they have frequently found themselves blindsided, and on which they have allegedly gone soft in the recent past.

Occam’s razor suggests Biden got exactly the review one would have expected, and therefore that he would have wanted.

We may never fully know why the lab leak thesis became politically correct months after officials across the federal government, in the medical field, and media had gone to such great lengths to pooh-pooh it. But we know that this created a political issue for the Biden administration after it had punted the origin question originally to the Chinese Communist Party (CCP)-dominated World Health Organization (WHO) for a futile Potemkin inquiry, and reports surfaced that it had quashed a Secretary of State Mike Pompeo-directed investigation into the matter.

The IC review was a necessary sideshow.

Because in the final analysis, how the coronavirus came about is of secondary importance to what China did once it was literally or figuratively out of the bottle.

Yes, the lab leak thesis is more than plausible based on a mass of circumstantial evidence, including that cataloged by the Secretary Pompeo-led State Department, the writings of prominent scientists and science journalists, and a House Republican-led report on the origins of the coronavirus. The president’s statement subsequent to the release of the IC review that “We will do everything we can to trace the roots of this outbreak … so that we can take every necessary precaution to prevent it from happening again” though banal and toothless, is fine insofar as prudence demands learning from catastrophes.

But set aside how the coronavirus came about.

We know it came from China.

We know the CCP silenced whistleblowers who might have had valuable knowledge and insight into the coronavirus that could have saved lives (and certainly, including those associated with the Wuhan Institute of Virology, where we know China engaged in dangerous gain-of-function research—one of the only places in the world where such work is conducted—that could very well have resulted in COVID-19).

We know it lied about human-to-human transmission.

We know it shut down internal travel but permitted Chinese citizens to fly all over the world and encouraged other nations not to halt such travel.

We know it hoarded personal protective equipment and then sold shoddy versions of it to peoples worldwide.

We know it pressed the WHO to push its favored narratives—including casting anyone who dared finger China for the coronavirus’s spread as racist and bigoted.

We know its mouthpiece threatened to “plunge” America “into the mighty sea of coronavirus” by withholding vital drugs as the crisis metastasized.

We know it sought to stymie investigations into the coronavirus’s origins at every turn.

One could rattle off infinitely more such points.

But the bottom line is this: The CCP lied, deceived, and in effect weaponized the coronavirus that began on its soil. It did everything possible to conceal what was transpiring subsequent to the outbreak, stop other nations from taking necessary precautions—but advocating they shut down human life for months on end—and encourage its spread globally, which it has tried to exploit and leverage at every point to increase its power and influence.

The Biden administration has never made this point clear—that a hostile China weaponized the virus and used it to pursue its ambitions. Consequently, it has never vowed to make China pay for it. And this in turn substantiates the point that the Biden administration’s punting of the question of the origin of the coronavirus to the intelligence community was part of a charade.

The review was the best the Biden administration could do if it wanted to create the impression of holding China to account out of political necessity, without doing anything about it.

And remember who the Biden administration’s core constituency is: The elite. Elites in government who have egg on their face over the gain-of-function research they funded by proxy at the Wuhan Institute of Virology, and who again refused to investigate the lab leak thesis when smoking guns may still have been hot; elites in the medical field who appear to have been influenced by China into ignoring or dismissing the lab leak thesis—that Big Tech even banned talk of; elites in the business community, who are wedded to trading with China forever no matter the CCP’s evils; and elites in the media who themselves are complicit in refusing to investigate the coronavirus’s origins, and often running CCP-favorable coronavirus propaganda.

This is to say nothing of Biden’s well-documented kowtowing to communist China for nearly 50 years, made all the more disturbing and dangerous given the business activities of son Hunter and other family members.

The losers of this charade are the American people, who are seeing China once again appeased by their leaders, which will only invite further aggression.