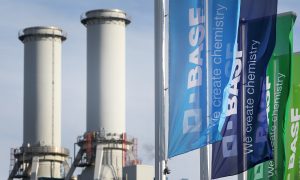 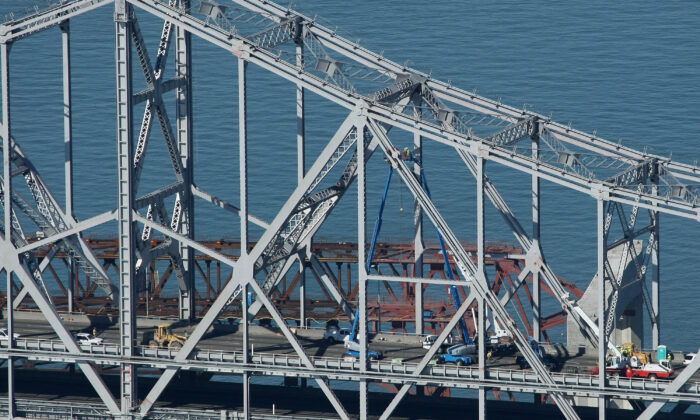 The Trouble With Chinese Infrastructure

How collaboration with China left California with an unsafe bridge

Consider, for example, the new span of the Bay Bridge from San Francisco to Oakland, California.

The eastern span of the Bay Bridge, originally a double-deck suspension bridge built in the 1930s, was damaged in the 1989 Loma Prieta earthquake. The bridge received a quick initial repair and reopened a month later. But it needed further work to make sure it could withstand large earthquakes. One option was a retrofit that was estimated to cost $250 million in 1992. Instead, California opted for a new bridge at an estimated cost of over $1 billion (pdf).

However, U.S. workers eager to participate in the bridge project would soon be disappointed.

California politicians rejected federal funding because it required that all steel be manufactured in the United States; they instead opted for a company that used some Chinese steel and Chinese labor as well. The bridge decks and materials were being constructed in China, leaving U.S. workers to assemble the parts, pour the concrete, and so forth.

Politicians selected the state-owned Shanghai Zhenhua Heavy Industries Co., which at the time had no experience building bridges. Zhenhua’s 3,000 employees working on the project included steel-cutters, welders, polishers, and engineers.

By 2007, the Chinese materials had proved troublesome. Inspections at the Shanghai fabrication facility revealed fissures appearing in thick steel bars. In 2009, the company shipped from China the main bridge tower and 28 bridge decks. Engineers found hundreds of cracks in the welds, a violation of the contract, and every one of the 750 panels had to be repaired. In 2013, dozens of the long metal rods on the project snapped, and during storms, critical parts of the bridge filled with water.

All told, the bridge came in a full $5 billion over budget—a lot more than the $250 million estimated cost to retrofit the original structure. The new bridge also came 10 years late and is still riddled with safety issues. University of California–Berkeley structural engineering professor Abolhassan Astaneh-Asl, who in 2000 raised concerns about new bridge design not being earthquake-safe, told reporters he declines to use the bridge.

Then-Gov. Jerry Brown famously shrugged off the botched repair, saying “[expletive] happens.” When whistleblowers called for a criminal investigation, the state’s attorney general, Kamala Harris, ignored them. The boondoggle also failed to register with then-Vice President Joe Biden, who proclaimed last year that the Chinese are “not bad folks” and “not competition for us.”

With their Belt and Road Initiative—also known as “One Belt, One Road”—China certainly appears to be direct competition for the United States. Beijing’s quest, as The New York Times once put it, was to become “the world’s civil engineer.” Other countries have since become wary.

Early this year, the government of Romania adopted a memorandum that would exclude China-based firms from public contracts for highway or rail projects. This comes at a time when Romania “desperately needs to start infrastructure works,” according to Deputy Prime Minister Dan Barna, amid concerns about companies that “do not live up to European standards.”

The Romanians may have taken note of the Bay Bridge boondoggle, where Chinese labor and materials didn’t meet U.S. standards. But there is likely another reason that Romania has chosen to keep China at arm’s length.

Like millions of other Europeans, Romanians lived under the yoke of communism from 1947 to 1989, when the nation rose up and toppled the regime of dictator Nicolae Ceausescu. Based on that experience, Romania is reluctant to become entangled with China’s communist regime. Strictly speaking, there’s no need for any nation to hire any Chinese firm for any project.

“If a single component fails, the whole thing comes down,” Astaneh-Asl says. “Fracture critical bridges have been out of favor since the 1960s. And when you look at this new span, there are many things that can go wrong.”

The test will come with the next earthquake. According to the U.S. Geological Survey, a major quake in the Bay Area is due by 2032.

Lloyd Billingsley is the author of “Yes I Con: United Fakes of America,” “Barack ‘em Up: A Literary Investigation,” “Hollywood Party,” and other books. His articles have appeared in many publications, including Frontpage Magazine, City Journal, the Wall Street Journal, and American Greatness.