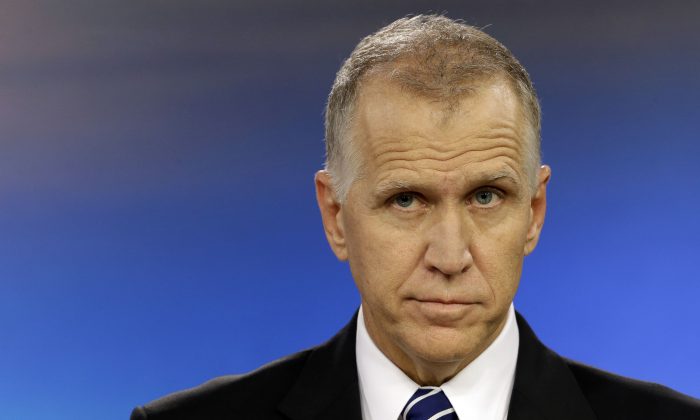 Democratic incumbent Sen. Mark Begich has the rare endorsement of the Alaska Federation of Natives. He is running against Republican Dan Sullivan, who has tried to equate a win for Begich as a win for Obama. It may end in a runoff.

A state known for a Senate delegation that is either Democratic or Republican, Colorado seems on track to potentially swing back to the right. Once golden boy Mark Udall (D) has seen his fortunes turn with the president. He now faces rising star Rep. Cory Gardner (R) in a race that is a near 50–50 split.

The race for Georgia is a three-way battle that could result in a runoff election on Jan. 6 if none of the candidates gets at least 50 percent of the vote. Though Libertarian Amanda Swafford is in the mix, the true race looks to be between David Perdue (R) and Michelle Nunn (D). Nunn could be weighed down by the president’s approval ratings—unless Perdue’s comments on outsourcing jobs from Georgia come back to haunt him.

Though seven of eight polls showed either a tie of Republican state Sen. Joni Ernst (R) in the lead, U.S. Rep. Bruce Braley (D) closed the gap with Ernst in October. The Iowa race is now in a 47–47 percent dead heat, according to a recent Quinnipiac University poll. Four percent remains undecided.

In a state traditionally known for sending Republicans to Washington, a very tight race has developed between incumbent Sen. Pat Roberts (R) and Independent candidate Greg Orman. The race is so close that it has everyone guessing who will win come Election Day.

This tight race between incumbent Mary Landrieu (D) and Republican Rep. Bill Cassidy seems to be headed for an almost certain runoff in December. Cassidy has an edge in the polls and Landrieu is no longer buoyed by African-American support that helped her in 2008.

Clinging stubbornly to a two-point lead in the polls, Democratic incumbent Jeanne Shaheen is facing off against Scott Brown (R) in the race for the New Hampshire Senate seat. Brown, a former senator from Massachusetts was handpicked by Republicans in the hopes of bringing them one step closer to regaining the Senate seat Shaheen took in 2008.

This unusually stable race started with a strong lead for incumbent Kay Hagan (D), which she has steadily seen drained away by her Republican contender Thom Tillis (R) and Libertarian Sean Haugh. Caught in an almost dead heat with Tillis on the eve of the election, the winner is anybody’s guess.