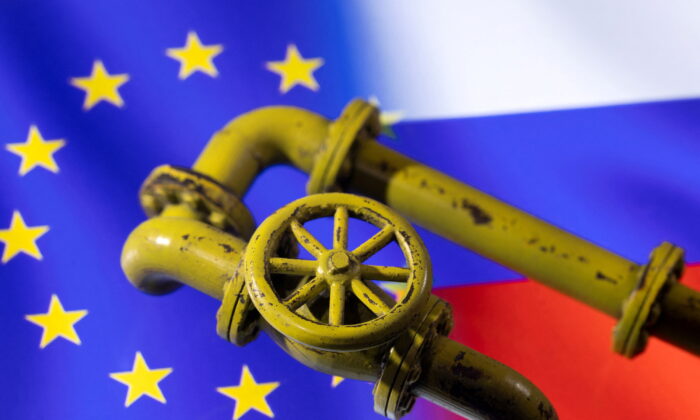 Natural gas pipes built with a 3D printer are displayed over Russian and European Union flags in this illustration taken Jan. 31, 2022. (Reuters/Dado Ruvic)

Only 15 years ago, the European Union produced more natural gas than Russia exported, according to the EIA. Repeating past mistakes and maintaining a failed energetic interventionist policy would only worsen what is already a structural disaster.

The prohibitive cost of electricity and gas in Europe isn’t a result of market flaws but of a completely unsustainable cost structure where consumers are forced to pay escalating taxes, a hidden CO2 tax, subsidies, and other rising regulatory costs. More than 60 percent of an average euro area country’s household bill is made up of taxes and regulated costs, according to Eurostat.

Brussels can’t turn water into wine, and, similarly, the European Union can’t “cap” the price of natural gas and oil. It’s almost ironic, but European leaders are spending days debating whether to impose a cap on Russian oil that would be set above the current Urals price and significantly above the five-year average levels.

The only thing that these so-called “caps” would achieve in a global energy market is to provide a massive subsidy that would then have to be repaid with higher tariffs or taxes afterward.

In Spain, they already made the horrifying mistake that led to what was called the tariff deficit: putting a cap on a tariff and passing the difference from the actual price to the following year with added interest charges. What the tariff deficit mechanism did was perpetuate higher tariffs even in periods of low commodity prices as the tariff deficit ballooned. The proposed gas cap would produce a comparable tariff deficit but at an enormous level if implemented throughout Europe.

Additionally, in a globalized and international market, the cap would create enormous arbitrage incentives that would only benefit China, which would continue purchasing cheap Russian commodities and exporting to Europe its more competitive goods.

We mustn’t forget that the natural gas “cap” in Spain has been a genuine catastrophe. Elevating it to Europe would be worse.

According to Enagas data, natural gas demand in Spain soared while it declined in the rest of Europe, due to the disguised subsidy that the “cap” entails. Additionally, the cost of the measure for the country has increased to 13 billion euros, according to the power sector, which all citizens will pay with higher taxes, and this has led to a massive transfer of funds to France, which benefits from purchasing subsidized energy from Spain at a discounted price while Spanish consumers pay the cost in higher bills.

The total cost of exports to France has exceeded 715 million euros (from June 15 to Nov. 4, according to power sector sources). Additionally, a significant increase in tariffs (+98 euros per megawatt hour) is added for clients with fixed contracts, converting their fixed contracts into variable ones due to the natural gas price subsidy.

The creation of a tariff deficit, which is what the current proposal would do to Europe, implies higher future costs and a larger debt burden. Short-term price “cuts” on gas and oil disguise the reality and incentivize demand while also creating an overcharge, the financing of which will result in higher prices and taxes in the future.

A European gas and oil cap causes no harm to Russia at all. We should have learned by now that through exports to China, India, and other Asian countries, Russia continues to set trade surplus records.

A European “cap” on Russian gas and oil would be a subsidy to China at the expense of European taxpayers.

Additionally, by subsidizing the price in the short term, the gas cap would create an artificial demand and a perverse incentive. More natural gas consumption and the long-term reliance on fossil fuels would be maintained.

A cap on natural gas prices leads to higher consumption of fossil fuels, higher taxes, and higher bills while it penalizes renewable investment and a competitive energy transition.

What should the European Union do then?

The European Union needs a competitive energy policy that makes use of all available technologies. Eliminating, delaying, and placing bureaucratic barriers on investments in supply-chain security is a luxury no nation can afford.

The European Union should:

The most important lesson is that the European Union will not solve an energy crisis created by interventionism by adding more bureaucracy, legal and regulatory instability, and penalizing those who can invest in energy security with higher taxes.

The energy crisis, which was already a high-cost issue for European citizens in 2019, will become a price and supply issue soon if the European Union disregards these measures and continues to impose interventionist policies, raising taxes and imposing idealistic and industrially unviable models.

Daniel Lacalle
Daniel Lacalle, Ph.D., is chief economist at hedge fund Tressis and author of “Freedom or Equality,” “Escape from the Central Bank Trap,” and “Life in the Financial Markets.”
Website