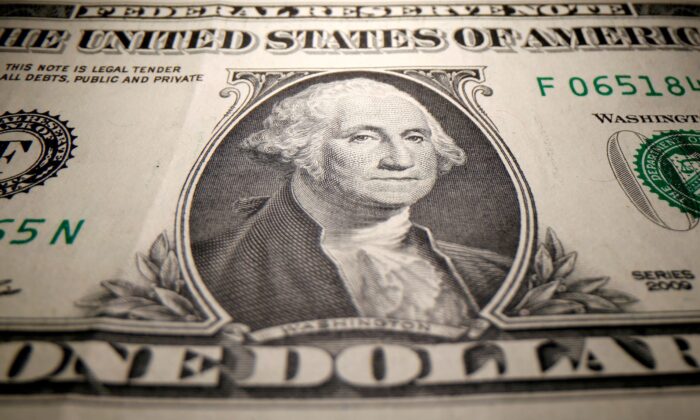 A U.S. dollar banknote is seen in this illustration taken on May 26, 2020. (Dado Ruvic/Reuters)
Business Columnists

The Strong Dollar Is a Risk to Corporate Profits

The strong dollar remains a risk to corporate profits and asset prices as the impact on the global economies grows.

While many commentators argued the dollar would go bust due to the excessive debt levels in the United States, such has hardly been the case. In 2022, as the U.S. economy is the “cleanest shirt in the dirty laundry,” the dollar has risen sharply.

With near 4 percent yields on short-duration Treasury bonds, stronger economic growth than most countries, and stable markets, foreign reverses flowed into the safety and liquidity of the U.S. dollar.

The chart shows the U.S. dollar rally and the net commercial trader’s long position in the dollar.

Of course, other currencies must decline if the U.S. dollar is rallying. This is the case because we measure currencies against one another or against a basket of currencies. As Michael Lebowitz noted in a previous post:

“The euro has lost 12 percent to the U.S. dollar this year, while the Japanese yen has ceded nearly 20 percent. Those losses may not seem out of the ordinary compared to stocks or bonds, but they are. Foreign exchange markets tend to be much less volatile.

“A weak currency versus the dollar is often good for a country as it makes its exports more price competitive. However, a weaker currency makes imports more expensive. Given soaring inflation rates, especially energy prices, this instance of a stronger dollar is wreaking havoc on Europe and Japan.

The graph below shows the strong negative correlation between 10-year U.S. Treasury yields and the euro and yen.

As we will discuss, the problem is that a strong dollar—while in theory good for the home base country—can become problematic in a globally interconnected marketplace.

Why Is a Strong Dollar Problematic?

As we wrote in “Long-Term Returns Are Unsustainable,” the stock market remains tied to the economy. To wit:

“Over time, there is a close relationship between the economy, earnings, and asset prices. For example, the chart below compares the three from 1947 through 2021.

“Since 1947, earnings per share have grown at 7.72 percent, while the economy has expanded by 6.35 percent annually. That close relationship in growth rates is logical, given the significant role that consumer spending has in the GDP equation.

“The slight difference is due to periods where earnings can grow faster than the economy when coming out of recession. However, while nominal stock prices have averaged 9.35 percent (including dividends), reversions to actual economic growth eventually occur. Such is because corporate earnings are a function of consumptive spending, corporate investments, imports, and exports.”

Since corporate revenues are derived from economic activity, slower economic growth reduces those revenues. In the United States, the Federal Reserve is hiking interest rates to slow economic demand by increasing borrowed capital costs. Those actions specifically target demand to bring down historically high inflation rates, which, according to a recent Gallup survey, are becoming problematic.

“In August, the majority of U.S. adults now say that price increases are causing financial hardship for their household.”

Those actions by the Fed will, by default, slow corporate revenue growth in the United States. However, the dollar poses another significant challenge to investors.

In the eurozone and elsewhere, households are under severe pressure by rising food and shelter costs and soaring energy costs. Such is due to the eurozone’s dependence on Russian oil and gas supplies, which remain cut off either directly by Russia or by bans on Russian imports. The strong U.S. dollar further exacerbates the eurozone’s problems because all commodities trade globally in U.S. dollars. This means that rising energy costs are even more costly on an exchange-rate basis.

However, it isn’t just commodity costs that are rising, it is everything that global consumers buy from U.S. manufacturers. As shown, 40 percent of the revenue for S&P 500 companies comes from international sales. Therefore, as the dollar strengthens, those products become too costly for global consumers to buy.

Therefore, as demand weakens domestically and globally, investors should not expect corporate profits to remain near record levels. As shown, the current gap between asset prices and corporate profits is at the greatest deviation on record.

The Dollar Strength Will Undermine the Fed

As discussed, the Fed is currently hiking interest rates, and reducing its balance sheet, to quell economic activity to bring down inflationary pressures. In market parlance, this is phrased as tightening monetary policy. In a vacuum, the Fed rate hikes will work as anticipated and could lead to a controllable economic decline. However, the Fed’s policy tools are blunt instruments and are subject to impacts from other catalysts, such as a strong dollar, higher borrowing costs, and inflationary pressures. As shown, while the Fed is trying to tighten monetary policy, the economic environment has already significantly tightened policy already.

As the British investment strategist Jeremy Grantham expressed it: “Profit margins are probably the most mean-reverting series in finance, and if profit margins do not mean-revert, then something has gone badly wrong with capitalism. If high profits do not attract competition, there is something wrong with the system, and it is not functioning properly.”

But, the strong dollar will most likely exacerbate the problem for investors and the Federal Reserve.

While investors cling to the hope that the Fed has everything under control, there is more than a reasonable chance they don’t.

Regardless, there is one truth about stocks and the economy: “Stocks are not the economy. But the economy is a reflection of the very thing that supports higher asset prices: corporate profits.”

In the end, it may be the strong dollar that is the “pin” which ultimately pricks the asset bubble.