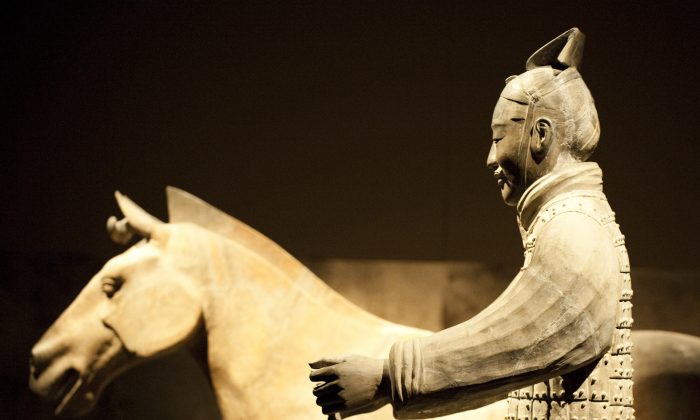 While many nations and kingdoms are known for their bravery in fighting to the death against superior forces, one ancient Chinese ruler did the exact opposite to seize victory from the jaws of defeat.

This is a story of how one patient king bided his time to execute the long game—one that took 20 years.

Beginnings of an Epic Feud

In the early 5th century B.C., near the start of the Warring States Period (475–221 B.C.), the southern Chinese state of Yue was in peril. Its neighbor, the state of Wu, had just defeated the massive Chu kingdom using brilliant stratagems devised by Sun Zi, author of “The Art of War.” Now, Wu State’s king, Helü, set his eyes on the weak and unprepared Yue.

Confounding matters, Yue’s king had just died, leaving the young and inexperienced King Goujian in charge. During the funeral period, Wu troops, led by Helu himself, launched a treacherous attack on the weaker state. Goujian led his own army, hopelessly outnumbered and outmoded, into battle.

But during the fight, Goujian executed a ploy that left the Wu king undefended, and a Yue general engaged him in a duel. The aging Helü was no match. He suffered a mortal wound and died as his troops made off for their homeland.

King Goujian Surrenders His State and Becomes a Slave

The new king of Wu was Helü’s son Fu Chai, and he wanted revenge. He ordered his subordinates to remind him on a daily basis that Yue troops had killed his father. Two years later, Wu rebuilt its strength and Fu Chai attacked Yue State once more. This time, Goujian was out of tricks. He sent his minister Wen Zhong to ask for peace terms.

Negotiations were harsh. In addition to Yue becoming a vassal state of Wu, King Goujian, his queen, and his top minister Fan Li themselves had to go to Wu to become slaves. In Goujian’s absence, Yue State would be ruled by Wen Zhong.

The Yue king, queen, and minister labored from dawn to dusk in the royal stables, in full view of the common people of Wu. Fu Chai would often come on horseback to see his captives, who now toiled in service of him.

But neither Goujian nor his companions ever complained in the slightest. Not one bitter word was spoken by night, and not even a sigh could be heard from their quarters when night fell. Meanwhile, the state of Yue was under the management of Wen Zhong. He did his best to please the Wu overlords, who never doubted Yue’s subservience—until it was too late.

The Vassal State That Wasn’t

Goujian’s slavery lasted three years. By this time, Fu Chai thought that Yue was safely under his control, so he allowed Goujian to return to his home state. His fellow slave and minister, Fan Li, created great plans for their revenge.

King Goujian by no means forgot his humiliation even after he received his freedom. He and his wife took up the lifestyle of commoners. He often worked the fields with the peasant folk to stay in touch with his constituents.

The king was also famous for an odd ritual he forced upon himself. To keep the memory of his enslavement fresh, he slept on a bed of straw and hung the gallbladder of a snake above it. Every morning, he would rise to lick the bitter organ.

King Goujian secretly prepared his nation for war. To maximize population growth, men and women could only be married if their ages were not too far apart. To ease the burden on the people, he avoided raising their taxes. In this way, Yue State’s power grew.

Outwardly, the leaders of Yue were very obedient to their Wu overlords. When doing business, Goujian and his ministers always let Wu get the better deal. Many beautiful women were sent from Yue to Wu to be concubines.

Despite repeated warnings from his experienced senior minister Wu Zixu, King Fu Chai was convinced that Yue had already been defeated and that there could no longer be conflict between the two countries. Being much younger than Wu Zixu, Fu Chai regarded him as a senile old man who seemed bent on opposing him at every turn.

Xi Shi, one of the Four Great Beauties of China, was a stunning girl who Fan Li had discovered while she was washing clothes by a river. She had little education and etiquette, but Fan Li trained her in various skills, including music and dance. After three years, she was perfect concubine material.

Not surprisingly, Fu Chai accepted Xi Shi immediately. In order to please her, he spent vast sums of money on the construction of palaces and even an artificial lake; and instead of minding political matters, he spent his days by her side. The powerful state of Wu was coming closer and closer to ruin.

Fu Chai was not the only one who had been seduced. Other officials entertained themselves with Yue beauties, and rich people spent vast amounts building their own estates. To feed Wu’s construction frenzy, Goujian and Fan Li sent logs so huge that they could only be transported by river downstream. The wealth of Wu was thus squandered.

After many years, Wu was only a proud shadow of its former might. King Fu Chai and his ministers were hopelessly in love with their women and palaces. Wu Zixu, the only one who might have been able to save them, was forced to commit suicide when he offended the king one time too many. When a drought hit the country, its people were on the verge of revolt. At this point, Fu Chai requested grain from Yue. Keeping up the act of the compliant vassal, Yue agreed.

But there was a catch: Before sending the grain to Wu, Fan Li first had it put in scalding water. The grain could still be eaten, but not used to grow crops. Whatever the despair of Wu’s farmers, it would soon be dwarfed by an even greater calamity.

Goujian now knew that Wu was ripe for the picking. He raised an army and conquered Wu with little resistance. Plunging into shame and regret, Fu Chai took his own life.

But Goujian’s triumph over Wu was a double-edged sword: Even after defeating the hated enemy, he could not rest. Eventually he turned against his own ministers, thinking they would betray him. Goujian had Wen Zhong, the man who had saved Yue in its darkest hour, executed, and Fan Li escaped to the state of Qi. It is sometimes said that he became the wealthy businessman Tao Zhu Gong. As for the beauty Xi Shi, legend says that she followed Fan Li, who was her true love, to Qi.

Goujian was later described as someone who “kept his bow even after the birds have been downed, and slaughtered his hounds to eat after the hunt.” Having achieved so much glory in wartime, his kingdom could not survive peace. Yue fell into chaos soon after Goujian’s death. Both states were eventually conquered by the much larger, now-resurgent kingdom of Chu, bringing the story full circle.