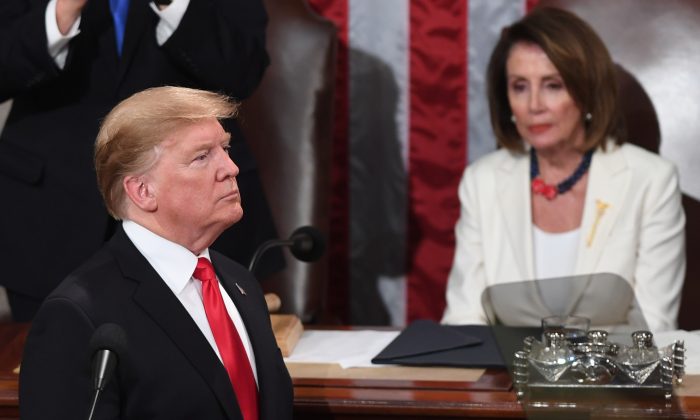 US President Donald Trump, delivers the State of the Union address at the US Capitol in Washington, DC, on February 5, 2019. SAUL LOEB/AFP/Getty Images
Viewpoints

The State of the Union and the ‘Resistance’

President Donald Trump delivered an outstanding State of the Union address on Feb. 5. And, although he opened his speech with hopes “that we will govern not as two parties, but as one nation” and laid out plans for “the agenda of the American people,” the reactions of Democrats during and after the speech raise questions about their commitment to working toward policy solutions.

The obvious contempt held by the current opposition party crosses traditional lines of disapproval and borders on un-American.

Democrats didn’t clap for calls to make the middle class stronger. They seemed upset that we’ve added 5.3 million new jobs and 600,000 manufacturing jobs. They looked agitated when the president said, “nearly 5 million Americans have been lifted off food stamps.”

Upon recognition of low unemployment for minorities, Democrats didn’t stand, and didn’t clap. They even looked angry over tax cuts and the doubling of the child tax credit that helped average, everyday Americans.

Few on the left applauded in recognition of the United States’ energy independence, and none on deregulation. Democrat darling Rep. Alexandria Ocasio-Cortez (D-N.Y.) wouldn’t even clap for putting sex traffickers behind bars.

So, how does the president run a country when a majority of the House has differences that aren’t about solving problems and governance, but rather about the core of what the United States is and should be?

Partisan politics has reached such extreme polarization that the optics of Democrats acknowledging clear wins for the country are seen as a hindrance to upcoming 2020 election runs. That’s a major problem. We should all be able to celebrate in U.S. successes—unless your policy goals run counter to success.

Maybe that’s the real issue, since the president has taken on issues that are often thought to be platforms that Democrats run on, such as criminal justice reform, prescription drug prices, and fighting for the working class.

President Trump asked for unity. But his calls to “re-ignite the American imagination” and to “choose greatness” weren’t met with shared hope, but bellicose rhetoric from the opposition party.

The Democrats’ response to the speech was delivered by Stacey Abrams, Georgia’s gubernatorial candidate in the 2018 midterm elections. Abrams, described by ABC News as the “first African-American woman to be nominated for governor by a major political party and the first woman to lead a party in the Georgia Statehouse,” chose to ignore everything in the State of the Union address and instead rehash tired, false allegations of racism and voter suppression in her own failed bid for governor.

Complete with a cornucopia of intersectional cohorts standing behind her like a mass choir, her carefully staged speech was less of a rebuttal and more like a launch of a 2020 Senate bid.

Speaker of the U.S. House of Representatives Nancy Pelosi (D-Calif.) responded to the speech on Twitter by calling the President a liar, saying “it will take days to fact-check all the misrepresentations that [President Trump] made during” the State of the Union address.

Senate Minority Leader Chuck Schumer (D-N.Y.) suggested the president wasn’t a leader, and said openly on Twitter that he was “political, divisive, and at times even nasty,” which clearly isn’t how the rest of the United States viewed his speech, given CBS News showed a 76 percent approval rating for the State of the Union address.

That rating was actually similar to last year’s rating of 75 percent. And a repeat of that statistic shows that three-quarters of the country approves of President Trump’s message when it isn’t filtered by liberal media activists who pretend to be journalists, and political partisans who distort and mischaracterize his message. It’s a signal that he actually does resonate with the majority of America.

It also explains the vitriol and ceaseless character attacks against the president, because, when he’s not constantly attacked, he’s rather popular and his ideas work.

But, when politicians hate someone who is living up to his campaign promises, enforcing U.S. law, leading in human-trafficking arrests, making gains on criminal justice reform, creating millions of new jobs, correcting trade imbalances, removing us from foreign entanglements, and so many more great things, it becomes necessary to ask ourselves if the “resistance” is actually working for America or against it.