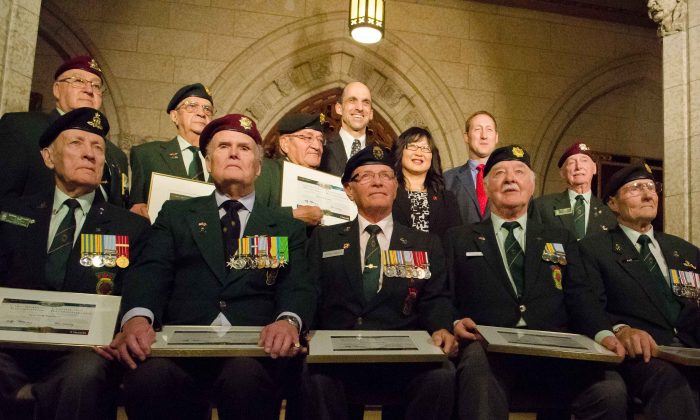 The South was Saved, but the North Still Starves

PARLIAMENT HILL—Watching the antics of North Korean dictator Kim Jong Un has special significance for those who fought his grandfather in the Korean War 60 years ago.

The Canadians were outnumbered ten to one by soldiers of the Chinese communist regime, but better guns and grim resolve let the Canucks hold the line.

“At one point I used my liquor ration to get two more Browning .30 calibres (heavy-duty machine guns). So it was really our firepower that allowed us to keep our position,” says John Woods, a former lieutenant in the infantry who spent just over a year fighting in Korea.

“But the Canadian soldier is a tough soldier and he is very steady. We knew we were going to be outnumbered, we knew when the attack was coming and everybody buckled down. I think I can say we did our duty.”

Woods, who stands tall, with a kind of Clint Eastwood gruffness, in the spring of 1951 found himself in Korea facing a wave of Chinese soldiers fighting for the North Korean communist regime.

“We never fought the North Koreans, we fought the Chinese, and we were outnumbered virtually all the time, and I mean heavily outnumbered,” he says.

The year that followed changed him, and not so much because of the fighting, or the stray mortar shell that blew up the jeep he was riding in, killing the signaller in the back beside him. It was the horrors the war inflicted on the Korean people.

“At the beginning, everything is new, and you are young, and you can accept things. But as the year moved on, the terrible devastation in the Republic of Korea and the civilian population were constantly on our minds,” he said.

“I once saw a woman put her baby in the Han River because she was starving and couldn’t feed it. For a young man, this is a terrible thing to see.”

As the platoon Woods led was winnowed down by casualties and other causes, his men would donate the extra rations they were still allocated to the refugees.

“We all did that. The British did it, the Americans did it, but the problem was enormous and heartbreaking. It was 60 years ago and I can see it like it was yesterday.”

However, Woods and his peers have a reward Afghanistan war vets likely hope for: the country they were sent to protect 60-plus years ago is prospering. South Korea is a dynamic, energetic democracy, an economic juggernaut that is home to top electronics firms, automotive companies, and a cultural sector now finding its footing on the world stage.

“What happened to South Korea after our war was the most wonderful thing,” said Woods, who has been back to the country on business several times.

“It made me feel that people I served with who didn’t come home, they didn’t die in vain.”

No Military Plans for North: McKay

On Tuesday, Woods and other members of the Ottawa chapter of the Korea Veterans Association were honoured in a short ceremony by Defence Minister Peter MacKay and Veterans Affairs Minister Stephen Blaney in the foyer of the House of Commons.

Mackay told The Epoch Times it was poignant to commemorate a conflict 60 years old given the “reckless and dangerous provocation” playing out on the Korean peninsula today.

MacKay said Canada was closely monitoring the situation, which has seen North Korean leader Kim Jong Un threaten nuclear war against the United States, but he declined to say what role Canada could have in the region.

“I think certainly lessons of history would demonstrate that Canada is a committed ally, is a capable country, is a country with great prowess when it comes to our military capability. But we are not in a position to start laying out military plans at this point.”

According to top North Korean military leaders cited by KCNA, North Korean retaliations “will start without any notice from now.” The regime has previously threatened the south with nuclear annihilation.

For Woods, the situation in North Korea is incomprehensible.

“The whole thing is so appalling. … [The people] are starving. It’s a totalitarian regime of the first order. It’s just bewildering.”

While the desolation Woods saw in 1951 has ended for South Koreans, North Koreans continue to suffer under one of the most tyrannical regimes in the world—and continue to do so with the support of the Chinese regime next door.

In China, the Chinese Communist Party (CCP) still refers to the Korean War as the “War to Resist U.S. Aggression and Aid Korea.”

In 2011, in what some saw as a diplomatic slight, Chinese pianist Lang Lang played a popular propaganda song at the Whitehouse before President Barack Obama and former Chinese leader Hu Jintao that glorified Chinese soldiers fighting Americans in the war.

The CCP’s official line is that Chinese soldiers died in glorious sacrifice. The song comes from a famous propaganda film about the war, and its lyrics describe the Americans as “jackals” to be “met with hunting rifles.” The lyrics were not sung during the performance.

North Korea remains dependent on China to this day, with Chinese trade accounting for over 60 percent of its imports and exports, according to the CIA. South Korea accounts for about 20 percent of North Korea’s international trade profile.

The Harper government is commemorating Korean War vets in 2013, the 60th anniversary of the end of open hostilities. It is often noted that Canadians turned out in numbers beyond the country’s small population to join the U.N. action in Korea.

Over 26,000 Canadians served in the war, 516 died. It was the third bloodiest conflict in Canadian history.

“This was not a forgotten conflict,” said MacKay. “You gentleman embody what it means to put it all on the line for peace and security for Canadians, and certainly for Koreans.”