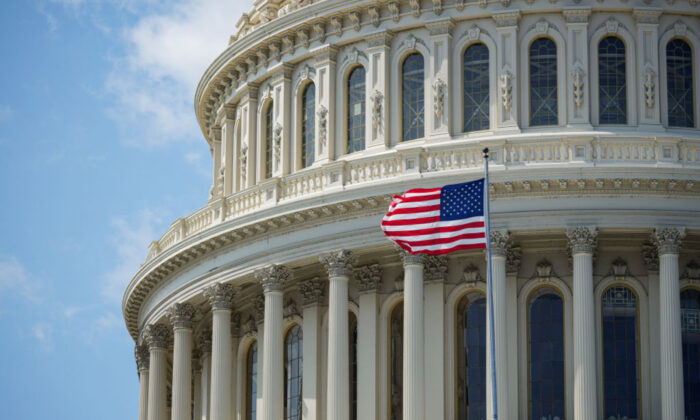 The American flag flies in front of the U.S. Capitol dome in Washington on Sept. 10, 2021. (Drew Angerer/Getty Images)
Viewpoints

There are just over 100 days until the U.S. mid-term elections, and consternation is acute in certain quarters. A new poll from Rasmussen Reports indicates that the Republican lead in the generic congressional vote has now increased to 10 points, which is up 2 points just in the past week.

A generic congressional ballot is a polling mechanism that asks responders what their political party preferences are “today,” as opposed to their opinions on specific named candidates. The Rasmussen poll explains why this number is critical: “In July 2018, before voters handed Democrats their first House majority in eight years, Democrats held a seven-point advantage (47% to 40%) in the generic ballot question.”

This spells disaster for the Democrats, who currently run both the Senate and the House of Representatives. As a result, various people are coming forward trying to convince voters that the Democrat Party is really not as radical as the White House staff, the Congressional Progressive Caucus, and other leftwing activists associated with the Party and media sycophants have conveyed during the Biden administration.

Before we get to the handwringing, judge for yourself whether the policies of the Congressional Progressive Caucus (CPC), the Biden administration, and the Democrat Party in general are properly labeled as “radical.” Here are a few key items from the CPC’s recommendations for executive action from March  [comments in brackets below]. Note that the progressives demand “executive action,” which amounts to the actions of a dictator, as opposed to legislative action, because they know that these extreme policies will never be passed by Congress:

And then there are the host of social, cultural, foreign policy, and national security issues that Democrats have been pushing: full-throated support for LGBTQI activism and grooming in public schools (also flying LGBTQI “pride” flags at U.S. embassies abroad); pushing a “transgender bill of rights”; Marxist critical race theory (also known as diversity, equity, and inclusion) education in public schools and the military; shutting down domestic production of oil and gas; massive government spending contributing to 9.1 percent inflation in June; weaponization of the Department of Justice and FBI against the political opponents of Democrats; a wide-open United States–Mexico border and the resultant spike in drug and human trafficking; a two-tiered justice system (e.g. January 6 protestors prosecuted to the hilt while violent BLM/Antifa thugs are let off easy); forcing unvaccinated military members out of the service; purging the military of extremists (as defined by Democrats); the Afghanistan withdrawal debacle; declaring economic war against Russia by circumventing the War Powers Act; pursuing a nuclear deal with Iran that would result in an Iranian bomb; kowtowing to communist China on a number of issues, including sending oil from the U.S. strategic reserve to China; massive supply chain problems exacerbated by Democrat policies (as noted here); and the Department of Homeland Security’s disinformation office start-up.

None of these issues are popular among a broad swath of Americans; each one panders to a narrow slice of the Democrat base and donor class. For example, Biden is being pushed by Green New Deal (GND) advocates in Congress to “declare a climate emergency” and enact policies aimed at implementing portions of the GND without congressional participation and consent. Yet, on July 20, a Fox News “America’s Newsroom” segment “highlighted a new poll showing just 1% of voters believe climate change is the top issue for the country to address.”

This is the kind of tin-eared fundamental disconnect that found the Democrats trailing Republicans in the generic congressional ballot by ten points. That poll is the direct result of Democrats pursuing their own political agendas (instead of focusing on the real concerns of the majority of Americans), and believing their own public relations and cheerleaders in the legacy media.

Never mind that Democrat policies have failed. They are delivering record gasoline prices and inflation, with no end in sight, nor any Democrat discussion of ending those policies and actually fixing the problems.

Some might call this a desperate move to regain some semblance of credibility at the Times. Recent polls have shown that trust in the legacy media has dropped to record lows, as reported here on July 21: “Just 16% of U.S. adults now say they have ‘a great deal’ or ‘quite a lot’ of confidence in newspapers and 11% in television news.” But credibility, once lost through a stream of lies on big issues, is very difficult to regain.

Think about these whoppers, propagated for years: Trump–Russia collusion; the Ukraine hoax/impeachment; the Mueller special counsel fraud; January 6 was an “armed insurrection;” Trump supposedly referring to Nazis and white supremacists as “very fine people;” claims of election fraud in 2020 are “baseless;” BLM/Antifa riots are “mostly peaceful;” hydroxychloroquine is dangerous and doesn’t work against COVID-19; and, Joe Biden is a moderate who will “restore America.”

Ask Jonah Goldberg and Bill Kristol how they like roaming in the media wilderness after having jumped the shark in conservative media by dissing Donald Trump. Their credibility in conservative circles is shot full of holes. So, too, at most of the major media, including The New York Times. Why should anyone believe people who got it so wrong on so many issues—and all seemingly in one political direction, that is, in favor of Democrat Party narratives?

Let’s face it: if The New York Times was truly serious about restoring its credibility, the Pulitzer Prize received by Maggie Haberman for her “Trump–Russia collusion” reporting would be returned and an op-ed posted apologizing for misleading the readership and perpetuating the Democrats’ political hoax. But that’s not going to happen because they’re not serious. As Democrat enablers, they are saying these things now to make the Democrat Party look more moderate to voters than it really is.

More mea culpas are popping up as Democrat mayors like New York’s Eric Adams lament the resulting police force drawdown stemming from “defund the police” and other progressive policy nonsense. They’re coming from people like Brooke Jenkins, the new San Francisco district attorney who ousted soft-on-crime Chesa Boudin, and who is taking tepid steps to tighten up criminal prosecutions.

Will the media try to provide shade for Democrats by claiming that they’re really old-school moderates as opposed to the flaming lefties that we have seen in Congress over the past two years? Can the credibility of Democrats and their media allies somehow be salvaged in the presence of $5 gasoline, 9.1 percent inflation, and the recession?

Despite being wrong for years, we are now supposed to believe that Democrat mea culpas—and we will hear many more before November as the Democrats try to salvage their political hopes—are actually genuine. We’re supposed to believe that we should ignore what they said before, but believe what they say now. Sorry. Fool me once, shame on you; fool me twice, shame on me.