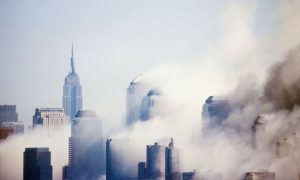 The Saudi Connection to 9/11 Attacks

WASHINGTON—Not long after the terrorist attacks on Sept. 11, 2001, questions about a connection between the hijackers and the Saudi government have been raised from the media and investigators. After all, 15 of the 19 hijackers were Saudi nationals. Some have suggested a cover-up by the Bush Administration. Classified pages from a 2002 congressional intelligence report may provide the evidence.

On Dec. 2, two congressmen introduced the bipartisan House Resolution H. Res. 428 that asks President Obama to declassify 28 pages in the “Joint Inquiry into Intelligence Community Activities Before and After the Terrorist Attacks of September 2001,”—an 858 page report to Congress concerning the  Sept. 11 terrorist attacks. The House and Senate respective intelligence committees worked on a Joint Inquiry congressional report that was released Dec. 2002.

Reps. Stephen Lynch (D-Mass.) and Walter Jones (R-N.C.) recently had an opportunity to review the 28 pages, and now believe it would be in the public interest to declassify them.

The report was about to begin on page 395 (416 in the original pagination) a new section on “sources of foreign support for some of the Sept. 11 hijackers while they were in the United States,” when the reader encounters for the next 28 pages only brackets with strikeout lines.

In a press release, Congressman Lynch—Democratic Chairman of the bipartisan Task Force on Terrorism and Proliferation Financing—states, “These pages contain information that is vital to a full understanding of the events and circumstances surrounding this tragedy. The families of the victims and the American people … deserve a full accounting, and that has not happened yet.”

President George W. Bush was the sole decider that these 28 pages would not be made public for what he said were national security reasons.

According to Lynch, the information will not compromise national security.

The Joint Inquiry report should not be confused with “The National Commission on Terrorist Attacks Upon the United States,” also known as the 9-11 Commission, which was wider in scope and released later, in July 2004.

Congressman Lynch has said in interviews that the reason he and Rep. Jones want to declassify the section is for the sake of transparency. The resolution states “The families of the victims and the people of the United States deserve answers about the events and circumstances surrounding the September 11, 2001.”

“We owe it to them to give 100 percent thorough information,” he said to Mike Nikitas, on NECN television interview on Dec. 16.

Lynch said that this portion of the investigation regarding foreign support for some of the hijackers was not just rewritten, shortened, or sanitized, but was deleted. “These 28 pages were actually excised from that report. These are not just redactions; the 28 pages that I read and that [Rep.] Walter Jones read, have actually been pulled from the report completely,” Lynch told Piers Morgan on CNN, Dec. 16.

Soon after the Joint Inquiry report was released, “more than 40 U.S. senators clamored for the release of the censored section of the report. They included John Kerry, Joe Lieberman, Charles Schumer, Sam Brownback, Olympia Snowe, and Pat Roberts,” states Anthony Summers and Robbyn Swan in an article about Saudi and Pakistani involvement in 9/11, appearing in Vanity Fair, Aug. 2011.

For now, Lynch urges his colleagues in Congress to read the pages for themselves. He’s confident that once they do, many will join him and Rep. Jones and sponsor Resolution 428. “We will have support,” he told Nikitas.

However, it won’t be easy for other Congress Members to get access to the 28 pages. According to Paul Sperry, Hoover Institute media fellow, in an op-ed, Dec. 15, in the NY Post, “It took a month long letter-writing campaign by Jones and Lynch to convince the House intelligence panel to give them access to the material.

Fifteen of the 19 hijackers were Saudi nationals. But Lynch will not answer questions about any assistance the hijackers received from members of the Saudi royal family or officials of the Saudi government. The 28 pages are still classified material.

However, Sperry states in the NY Post op-ed cited above, “Some information already has leaked from the classified section, which is based on both CIA and FBI documents, and it points back to Saudi Arabia, a presumed ally.”

“Case agents tell me, [investigators] were repeatedly called off pursuing 9/11 leads back to the Saudi Embassy, which had curious sway over White House and FBI responses to the attacks,” Sperry writes.

Sperry concluded, “Not just wealthy Saudi hardliners, but high-level diplomats and intelligence officers employed by the kingdom helped the hijackers both financially and logistically. The intelligence files cited in the report directly implicate the Saudi embassy in Washington and consulate in Los Angeles in the attacks.”

Someone else who has read those 28 pages, the co-Chair of the Congressional Joint Inquiry into 9/11, former Sen. Bob Graham (D-Fla.), has not been at all reticent to speak out about the Saudi connection to at least some of the hijackers.

In Huffington Post article from Sept. 11, 2012, co-author Graham wrote, “From the outset of the Congressional Joint Inquiry Into 9/11, it seemed implausible that the hijackers—most of whom spoke no English and had never been to the U.S.—could have executed the heinous plot on their own. … Sadly, those 28 pages represent only a fraction of the evidence complicity that our government continues to shield from the public, under a flawed classification program which appears to be part of a systematic effort to protect Saudi Arabia from any real accountability for its actions.”

Graham, who was formerly chairman of the Senate Intelligence Committee, noted the unwillingness of the FBI to acknowledge the nefarious connection between a Saudi couple living in a gated community in Sarasota, Fla. and several of the hijackers, including Mohamed Atta, who frequently visited their “posh home.” The couple abruptly returned to Saudi Arabia about two weeks before 9/11.

In his book, Intelligence Matters (2004), Graham concluded that the White House was stonewalling Congress’s inquiry and directing a cover-up.

In Nov. 2004, Graham said in an interview with Mother Earth Jones, “We found that there was compelling evidence that the Saudis played an active role in assisting two of the terrorists in Southern California, including being the means of substantial funding for those two terrorists. And this question of whether their support was limited to those two, or may have extended to others of the 17 terrorists, is still an unsolved mystery ….”

What Graham and Sperry say is not inconsistent with a high-ranking official in the Bush Administration, who was the assistant secretary of the Treasury for terrorist financing and financial crimes, 2005-2009. Juan C. Zarate, who also served as deputy assistant to President Bush, referred in his book, Treasury’s War (2013) on pages 84-85, to “FBI investigations that found its way to some of the 9/11 hijackers” and that the FBI was getting “to the bottom of suspicions that the embassy had been subsidizing the hijackers’ stay in the United States.”

Zarate identifies two of the hijackers, Khalid al-Mihdhar and Nawaf al-Hazmi, as receiving cash payments from the embassy. However, the two hijackers were Saudi citizens and there could be other reasons for the payments. Zarate states, “There was no evidence that the Saudi government had tried to assist the 9/11 hijackers.”

Sperry implicated then-President Bush: “Just days after Bush met with the Saudi ambassador in the White House, the FBI evacuated from the United States dozens of Saudi officials, as well as Osama bin Laden family members. [Prince Bandar bin Sultan] made the request for escorts directly to FBI headquarters on Sept. 13, 2001—just hours after he met with the president.”

Sperry wrote, “[The Joint Inquiry] findings must be released, even if they forever change US-Saudi relations.”