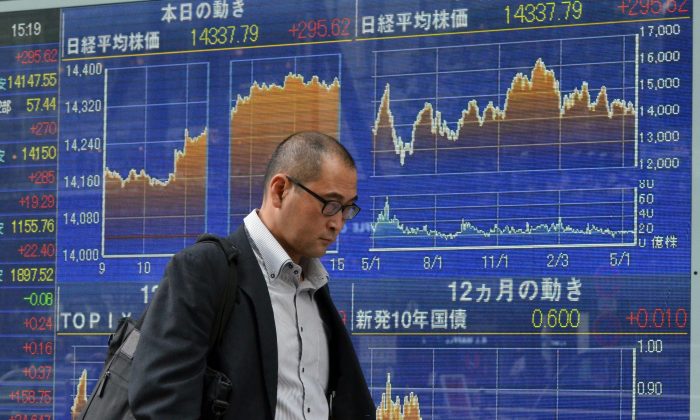 A share prices board in Tokyo on May 22, 2014. (Yoshikazu Tsuno/AFP/Getty Images)
Opinion

The No. 1 rule in capital markets is trust: before you can buy or sell securities, you have to have a price in mind. This price comes from research of the information available in the market.

We often forget the most important part in this whole process: We have to trust the information; otherwise all bets are off.

In the United States, people often ignore this fundamental issue of trust because for many years market information was regarded as accurate and reliable. The United States is an advanced economy with a very clean political and legal environment, and people were accustomed to true information from companies and other legal entities.

But the “great recession” taught people a lesson about financial engineering. The pricing of mortgage-backed securities and the later collapse of Lehman Brothers taught investors that blind trust for financial companies can cause huge losses for investors. The trustworthiness of financial information deserves more attention for equities, since it is much more difficult to give fatal false information in the bond market.

In almost all emerging markets, corruption is a serious problem in the political and economic systems (corruption is the main obstacle for its economy to become a developed economy); financial engineering in capital markets is everywhere. Even after careful examination one can often fail to detect the dirty stories inside those corporations, as in the $580 million write-down Caterpillar took in 2012 after uncovering massive fraud in the Chinese mining company it bought in 2011.

The golden rule in investment: If you cannot trust the financial report of a company, then do not invest.

In the stock markets of many developing countries the degree of fake financial reporting corresponds to the degree of corruption in society as a whole.

Since there are so many opportunities in developed countries where financial reports are generally trustworthy, especially in the United States, one should not invest in the stock markets in developing countries, where companies similar to WorldCom and Lehman Brothers are everywhere.

But if one does decide to go ahead and invest in emerging market equities for some reason, there are two risks that need to be addressed: one is the degree of trust in their financial reporting, and the other is the currency risk factor—the currency of most developing countries may depreciate substantially over time.

We will list several relatively strong “permanent” developing countries to illustrate the point:

5) The Malaysian ringgit, introduced around 1995, fared much better: The U.S. dollar could fetch 2.5 and now a little more 3.2 (it has a chance to become a developed country in the next 10 years).

So (1–C) stands for the level of trust we can place in that equity market and let’s use a U.S. “Bank A,” for example, in the developing country to describe the equity pricing model.

If the stock price of a Bank A in the United States is $100 traded on New York Stock Exchange with a P/E of 12 right now, for example, and let’s see how a similar “Bank B” in Brazil is going to be valued by U.S. investors (in the form of American depositary receipt, or ADR).

So by U.S. standards, this bank may have an initial value worth around $50 in Brazil. Assume the corruption index in Brazil is 0.3, that means the trust index is 0.7, so for a U.S. investor, the fair price he is willing to pay will be around 50 x 0.7 which comes to $35. If the planned time to invest is one year and the market assumes a 5 percent depreciation of Brazilian real (did not include the dividend factor), so the price a U.S. investor is willing to pay is 35/ (1+ 5 percent).

The general idea is (can always add dividend and other factors) to have a formula like:

Where P(US) is the price a U.S. investor should pay in U.S. dollars for the stock in this emerging market;

P(D) is stock price you are willing to pay in the interest environment of the developing country(that is the stock is traded in that country);

The C is the percentage of corruption derived from the Global Corruption Barometer, so (1-C) is the degree you can trust the financial information;

1+r is the discount rate for currency depreciation of the developing country in the investment period.

To make things simple, we calculate everything in U.S. dollars and do not include dividend factor.

From the Bank A and B example, we can see that in most cases you need more than 50 percent discount in dollar value to invest in emerging market stocks (in China, you need more) for the same type of company. There are lots of other factors that should be incorporated like the legal system, arbitration process, debt collection—the list can go on, and looking from a comprehensive perspective, stocks in developing countries usually look expensive. It is not easy to find good value investments in those countries because domestic capital markets often push equity prices beyond fair value.

If you want to invest in a developing country stock market that is not democratic, you need to consider another discount: political risk: government officials in power can make a company worthless overnight by arresting the entire senior management on trumped-up charges and liquidating the company, and putting the cash into government coffers before a court appearance. The guilty verdict is guaranteed.

Look what happened in Chongqing under Bo Xilai. Hundreds of such shows are on display in China every year, making the career of being a CEO one of the most risky in China. Along with the CEOs of state-owned enterprises, a certain percentage will end up spending time in jail during their lifetime. The chances of incarceration are bigger than those of Mexican drug dealers.

In general, stocks listed in developing countries will be priced at least 50 percent lower than in the United States. A further 20 to 30 percent discount is needed for those without a political system to elect governments in a democratic way to lower the downside risk.

From the above overview analysis, you can see that investing in emerging markets is not as simple as it seems, and many of the marketing campaigns that advise people to invest internationally based on a simple comparison like P/E ratio are misleading and unethical.