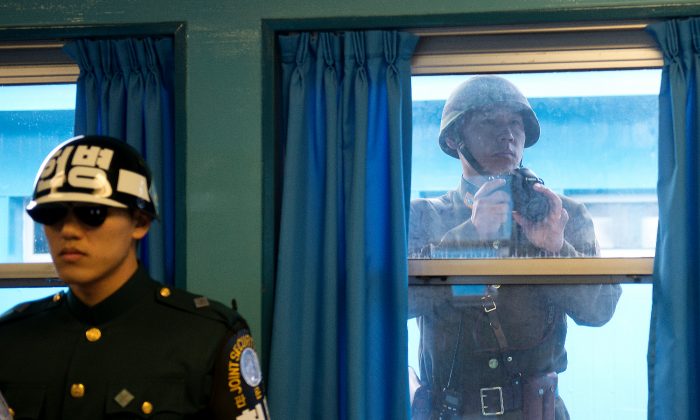 A North Korean Soldier takes photos through the window while U.S. Army Gen Martin E. Dempsey, chairman of the Joint Chiefs of Staff, is briefed at the demilitarized zone in South Korea on Nov. 11, 2012. (D. Myles Cullen/Department of Defense)
Asia & Pacific

When will Korea reunify? Or is that the right question to ask?

Liam Neeson recently donated $1,515 toward Korean reunification. The actor, who will be playing General Douglas MacArthur in an upcoming movie about the Korean War, wanted to do something to signal his support for improved inter-Korean relations. Along with his donation, Neeson predicted that the two Koreas will reunify within the next five years.

Everyone has his or her own prediction for Korean reunification. Futurologist George Friedman thinks it will happen before 2030 while Ian Bremmer of the Eurasia Group believesthat reunification may be just around the corner. The CIA predicted that reunification will take place in 10-15 years—but that was in its global survey published in 2000. Oops! Indeed, the CIA’s crystal ball rarely reveals the future very accurately. It failed to anticipate the collapse of the Berlin Wall, the disintegration of the Soviet Union, or the Arab Spring uprisings.

So, when it comes to guessing the date of Korean reunification, Liam Neeson probably can’t do any worse than America’s top spooks. But how useful is it to play the reunification guessing game?

Back in the 1970s, it made some sense to speculate about when the two Koreas might reunify. The two countries had roughly the same economic status, similarly undemocratic systems, and rather conservative and insular societies. There were even high-level discussions at that time between the respective leaderships about what a confederation of the two systems might look like.

Back in the 1970s, it made some sense to speculate about when the two Koreas might reunify. Today, however, they live on different planets.

Today, however, the two Koreas live on different planets. North Korea remains autocratic while South Korea has become democratic. Social life south of the DMZ is modern and open to the world while life in the north is relatively isolated and parochial. In the economic realm, meanwhile, the two countries have experienced perhaps the greatest divergence. The gross national income of South Korea is now 44 times that of North Korea. The trade volume of the south is 144 times that of the north.

So, because of these stark political, social, and economic differences, the question of when the two countries will reunify is largely irrelevant. Government representatives from Pyongyang and Seoul met in mid-December and couldn’t agree on anything, not even on whether to meet again. For the time being, then, forget about any discussions on even the tiniest steps toward reconciliation (much less reunification).

Given its unlikely prospects in the short term, reunification represents an abstract aspiration for most Koreans. One day, as if by magic, reunification will simply happen. Miracles, by their very nature, defy prediction.

One day, as if by magic, reunification will simply happen. Miracles, by their very nature, defy prediction.

As for the scenario of North Korean collapse followed by absorption into the South, those predictions have proven equally inaccurate. The North Korean regime has survived the collapse of Soviet-style Communism, the loss of trade on preferential terms with its erstwhile allies, a devastating collapse of agricultural and industrial production, an ensuing famine, the death of the father-and-son duo that ruled the country for more than half a century, and an equally long-lasting set of sanctions that have only reinforced the country’s own tendency to fall back on self-sufficiency.

North Korea’s juche system, in other words, doesn’t have a clear expiration date.

North Korea specialist Andrei Lankov argues that North Korea’s collapse will come unexpectedly and South Korea should prepare for this eventuality. “Maybe the best way to describe this situation is to compare North Korea’s geopolitical neighborhood to a large city where disastrous earthquakes are known to be possible,” he writes for NK News. “In such a city, all responsible authorities should remember that another quake is likely, so all necessary preparations have to be made and all necessary plans have to be drafted and systematically kept up to date.”

The topic of reunification, then, swings between these two extremes. It falls into the realm of magical thinking or the realm of disaster preparedness: miracle or catastrophe.

For Kim Dae Jung and Roh Moo Hyun, however, reunification was something altogether different: a pragmatic policy choice. They believed that gradual reconciliation between the two Koreas would help North Korea eventually achieve sufficient economic parity with the South to make reunification feasible.

North Korea is eager to restart some of the key aspects of that earlier reconciliation policy, like the Kumgangsan tourism project. If such projects resume, the North might more enthusiastically embrace key elements of the South’s priority list, like divided family reunions.

Sure, the Kim Jong-un regime could collapse. But, like an earthquake, it’s not something to try to precipitate or wish for: the negative consequences for everyone in the region would be immense. At the same time, reunification as an aspiration is a useful concept, the closest thing that Koreans all over the world have to a common civic religion.

Korean Reunification: The View From the North

But I think the question “When will the two Koreas reunify” is not the right one. Instead, we should be asking, “When will the two Koreas reconcile?” And by reconciliation, I mean even the smallest steps toward mutual understanding and joint cooperation. Reconciliation—like the nuclear deal between the United States and Iran or the diplomatic breakthrough between Washington and Havana—doesn’t require regime collapse or even much in the way of mutual admiration.

By all means South Korans should prepare for the possibility of North Korea’s collapse and dream of a distant future of reunification. In the meantime, however, it might be more useful to prepare for and dream of something more mundane: reconciliation.

John Feffer is the director of Foreign Policy in Focus (FPIF). This article was previously published on Hankyoreh. Republished from FPIF under Creative Commons License 3.0.