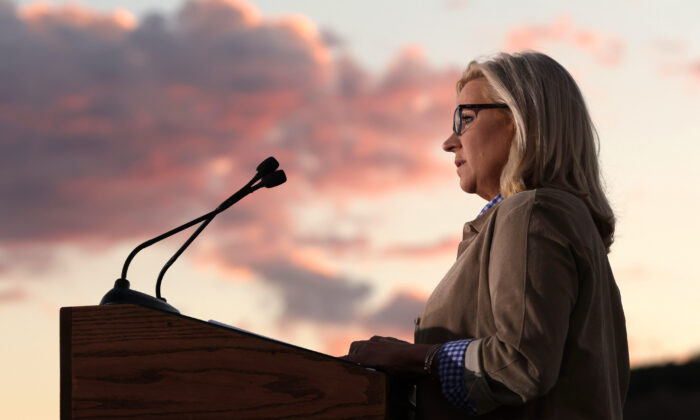 The Repudiation of Liz Cheney

As was predicted by nearly everyone, Rep. Liz Cheney (R-Wyo.) was crushed in the Wyoming Republican primary on Aug. 16 by Trump-endorsed Harriet Hageman.

In the run-up to the election, psephologists put Hageman, a lawyer who actually lives and works in and for Wyoming, some 20-odd points ahead of the anti-Trump crusader Cheney.

In the event, Hageman won by more than 37 points.

This election was a definitive repudiation of Cheney by the voters of Wyoming.

But it was much more than that as well.

It was a biopsy, a core sample of an important part of the American political consensus.

But that doesn’t mean, as Cheney’s partisans claimed, that the election was anomalous or a political outlier.

On the contrary, the regime’s searchlight, and its money, was focused laser-like on the election because everyone understood that it was a referendum not just on Cheney, but also on Donald Trump, and not just on Trump, but also on the elite compact that has increasingly concentrated power, privilege, and presumption in the hands of a largely unaccountable elite.

Cheney presented herself as a lonely and principled defender of “our Constitution” against the depredations of the unspeakable marauder Trump.

A few weeks ago, Cheney’s father, former Vice President Dick Cheney, dusted off his cowboy hat and made a campaign ad for his daughter in which he said that never in the course of America’s nearly 250-year history has there been “been an individual who was a greater threat to our republic than Donald Trump.”

Liz Cheney, from her perch as “vice chair” of the illegally constituted Jan. 6 witch hunt, often says the same sort of thing.

Republicans, she has declared, can’t be loyal to Trump and loyal to the Constitution.

That may sound good if you’re David French or Bill Kristol, but push a little and you see that it’s just empty persiflage—indeed, it’s invidious nonsense.

Dick Cheney says that no one has ever been a greater threat to “our republic” than Trump.

Scratch a little and you see what he means: No one in our history has been a greater threat to the elite consensus than Trump.

That may be true.

At any rate, it’s plausible, and it explains the near hysteria that has insinuated itself into the governing apparatus when it comes to Trump.

It explains the expensive and destructive charade of the Russia Collusion Delusion—that multi-year, $40 million, Democrat-hatched and FBI-nurtured plot to destroy first candidate, then President Trump.

It explains the assiduously circulated meme that Trump was promulgating a “big lie” by challenging the 2020 election when, in fact, that election was rife with illegalities, anomalies, and fraud.

The real “big lie” was the lie that the 2020 election was on the up-and-up, the fairest and “most secure in history.”

Telling the whole story of that lie is the subject for another column, or, rather, an entire book, but Conrad Black provides a tasty hors d’oeuvre when he writes, “Voting rules were [illegally] changed in a number of states in 2020, supposedly in response to the pandemic, there was greatly expanded use of drop boxes, and the judiciary refused to hear any of the constitutional challenges Trump launched, albeit tardily, against these measures.”

Finally, the threat that Trump poses to the elite, deep-state consensus explains the whole charade of the Jan. 6 committee’s kangaroo court.

In her graceless, petulant, non-concession concession speech, Liz Cheney once again presented herself as a principled defender of principle and the American way.

“Two years ago,” she said, “I won this primary with 73 percent of the votes. I could easily have done the same again; the path was clear. But it would have required that I go along with President Trump’s lie about the 2020 election.”

Regime scribes and publicists are already busy presenting Cheney as a “martyr.”

But she’s no martyr.

She’s just, as Victoria Marshall puts it in The Federalist, “another rich, entitled member of the D.C. establishment.”

The Cheneys, Liz and Dick, along with the entire anti-Trump coterie, repeatedly say they will do “whatever it takes” to keep Trump from “anywhere near the Oval Office.”

The irony is that even as they pledge themselves to lawless extremism, Trump proceeds calmly along.

On Jan. 6, 2021, he asked his supporters to demonstrate “peacefully and patriotically.”

Liz Cheney, airing a clip of the events of that day in the course of her inquisition against Trump, left out that exculpatory portion of the video.

The FBI raided Trump’s private residence in Palm Beach, Florida, hoovering up all manner of personal material, including the former president’s passports.

That outrageous overreach by the country’s premier law enforcement agency is all of a piece with the “by-any-means-necessary” spirit the Cheneys have nurtured in their battle against Trump.

The raid was supposed to reveal Trump as hoarding “nuclear secrets” or other classified material.

In the event, it revealed the deep-state floundering in tertiary madness, sloppy in its incontinent deployment of police power.

The public was aghast and disgusted.

The script called for Trump to be cast as a threat to the Constitution and the rule of law.

As the play unfolds, however, he emerges as a law-abiding upholder of due process and principled opposition to what looks more and more like totalitarian overreach.

It was also Cheney’s repudiation of the very principles she has pretended to protect and cherish.