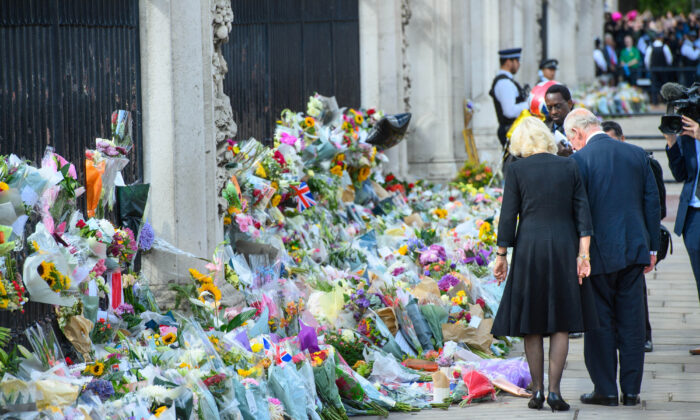 King Charles III and the Queen Consort arriving at Buckingham Palace, London after travelling from Balmoral following the death of Queen Elizabeth II, in London, on Sept. 9, 2022. (Matt Crossick/Empics Entertainment/Abacapress.com via TCA)
Viewpoints

London—Watching BBC and Sky News coverage of the death of Queen Elizabeth II, one is struck by the adjectives used by reporters, commentators, and people interviewed outside Balmoral castle and Buckingham Palace: sense of duty, virtue, integrity, service. What astounds is that these and other character traits the late Queen exhibited were once considered normal and worthy of being taught to children, but today stand in sharp contrast to what is modeled and accepted.

One commentator said the Queen’s death is the symbolic end of the Greatest Generation. We pay lip service to the virtues that made the greatest generation great, but no longer promote them, whether it is in public schools, social media, or the wider culture.

I saw her once. It was in the early 1950s, shortly after her ascension to the throne. She was on her first visit to the United States as the sovereign. My father took me to a University of Maryland football game. She circled the football stadium track in an open car before a cheering crowd.

So little is known about Elizabeth, the person. That’s one reason why the Netflix series “The Crown” attracted such a large viewership. Claire Foy, who played the young Elizabeth, displays the early self-doubt she must have felt as one of only six female monarchs in the past one thousand years, beginning with Elizabeth I and Mary I.

Perhaps her only misstep was her failure to initially appreciate the public’s adoration of Diana, Princess of Wales. Following Diana’s death it was days before public pressure forced her to make a video statement about her admiration of Diana and to visit a large pile of flowers propped against the gates of Buckingham Palace.

In their book “Elizabeth II: An Oral History” (Penguin Press), authors Deborah and Jerry Strober interview dozens of people who knew or worked with the Queen, or had unique insights from relatives who knew her over her seven decades on the throne. Their book provides information (and, yes, delicious gossip) probably available nowhere else on the Queen, Charles, Diana, and the rest of the royal family.

In an Afterword, they write: “However long Charles occupies the Throne, the future will belong to (his son) William. Now forty years of age, he has observed the way in which his grandparents, Queen Elizabeth and the late Philip, conducted themselves. Further, he will have the advantage of witnessing his father as Monarch …”

There are and for many years have been critics of the monarchy and the notion that blood alone should determine a head of state. But Elizabeth II revived the faith of many in the institution and if it is to survive for another generation or more the credit will clearly and deservedly be hers. Much will initially depend on her son, now known as Charles III (Charles I was beheaded in 1649 for alleged treason). Because of his age (74 in November), this modern Charles will be a transitional figure who will likely continue to promote his liberal environmental and cultural agendas. Whether that will go over with the public and their own evolving attitudes will be known soon enough.

It’s difficult to think of a world without the Queen. Even for non-citizens of the UK, she has been such a presence in the lives of people of a certain age.

Liz Truss, the new British Prime Minister, said the Queen was “the rock on which modern Britain was built.” That is not an overstatement.