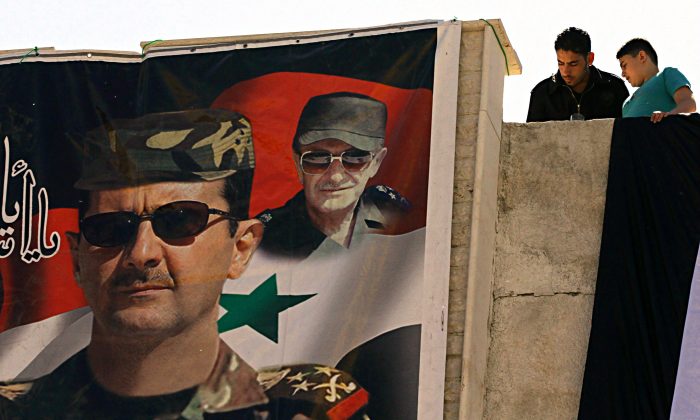 A poster of Syrian President Bashar al-Assad (L) and his late father and predecessor Hafez al-Assad in Damascus on May 1. (Louai Beshara/AFP/Getty Images)
Opinion

The Problem With Young Dictators

Bashar al-Assad is not going to age out of office any time soon.

The classic image of the dictator clinging to power, resisting the world’s entreaties to resign, and fending off internal attempts at ouster is that of an old man, stubborn and long past caring what others think. He’s been on the throne for so long that his name has become synonymous with the state—l’état c’est moi!—and his very longevity has become a stinging rebuke to his opponents.

The rogues’ gallery of elderly dictators, while ideologically diverse, is united by two things: sheer cussedness and extreme avarice.

Robert Mugabe, the current president of Zimbabwe, is 91 years old. Before they were toppled in the Arab Spring uprisings, the trio of Hosni Mubarak of Egypt (83 at the time), Zine El Abidine Ben Ali of Tunisia (74 at the time), and Moammar Gadhafi of Libya (69 at the time) were all past retirement age. In Uzbekistan, Islam Karimov is 77 years old; in Sudan, Omar al-Bashir is 71; in Uganda, Yoweri Museveni is 70.

Paul Biya has ruled Cameroon for nearly 40 years. He is currently 82 years old and world’s longest serving nonroyal national leader. Cameroon is one of the poorest countries in the world. Biya has reportedly amassed a fortune of $200 million. Of course that’s peanuts compared to al-Bashir’s $1 billion, Museveni’s $1.7 billion, or Mugabe’s $3 billion.

Political opponents of such leaders hope that age will eventually bring a certain degree of weakness or infirmity of purpose that will bolster efforts to dislodge the tyrants. Who can forget the moment on Dec. 21, 1989, when the aging Romanian autocrat Nicolae Ceausescu realized that the huge crowd assembled in downtown Bucharest was not on his side? In his befuddlement Ceausescu suddenly lost his cloak of invincibility and turned back into the frail 71-year-old that he was.

Even if these dictators remain determined to cling to power, surely sickness or even death will effect a change of regime. Perhaps only a few years or even months will pass before the laws of biology accomplish what the laws of politics have not.

But what can you do with the exceptions to this rule of dictatorial decrepitude? Some autocrats are merely middle-aged, like Alexander Lukashenko of Belarus, who is only 60 years old, even though he seems to have been in power forever. Kim Jong Un of North Korea is only in his early 30s and serves as a reminder that hereditary succession is one way that dictators (Eternal President Kim Il Sung in this case) can exert influence even after their deaths.

Equally challenging is the case of Bashar al-Assad. He’s been in power for nearly 15 years, which puts him in the top 25 of longest-serving leaders. But he’s only 49 years old (and has amassed only $550 million). His father ruled until he was nearly 70. Can Syria or the world endure another two decades of despotism from Assad the Younger?

The Future of Syria

According to recent news reports, Assad is now on the defensive in Syria’s four-year civil war, which has claimed the lives of more than 220,000 people, including 67,000 civilians and 11,000 children.

Rebel forces have made significant territorial gains of late, including key cities in Idlib Province. In mid-May, rebels seized the Mastouma military base, one of the last Syrian Army holdouts in the area. In February Assad’s forces controlled only a spit of territory in this section of Syria.

Aleppo, another island of government control northeast of Idlib, may be the next focus of opposition forces. Assad continues to hold onto a large swath of the coast and the land between Idlib and Damascus. Although it retains only half of Syrian’s territory, the government has jurisdiction over a significant majority of the population.

The opposition’s success seems to have resulted from greater coordination between the moderates and the Islamists. A new military formation, the Army of Conquest, has emerged in the Idlib region, consisting largely of Islamist factions including the al-Nusra Front. U.S.-supplied weaponry has also played a pivotal role. Another factor behind the recent military advances is a Qatar-brokered compromise between Turkey and Saudi Arabia that enables greater external coordination in support of opposition forces.

Meanwhile, rebels in the southern part of the country have also made gains. And the Islamic State in Iraq and Syria (ISIS), despite aerial bombardment and a recent Special Forces raid by the United States that killed a top ISIS leader, has been on the verge of seizing Palmyra, a key city between Damascus and Homs (over in Iraq, ISIS has also taken the key city of Ramadi).

Assad himself seems to be feeling the heat. His inner circle is getting fidgety: Three top intelligence people have been sidelined over the last few weeks. The latest, Ali Mamlouk, has been placed under house arrest on suspicion of plotting a coup.

But don’t count Assad out quite yet. He still has the support of Iran and Russia. Hezbollah has ramped up operations along the Syrian–Lebanese border. And the raids conducted by the United States and other countries aimed at reducing the influence of ISIS may eventually take some pressure off the government in Damascus.

“The regime lost an important provincial capital that was surrounded by opposition militias,” Syria expert Joshua Landis observed in response to rumors that Assad has told Alawite families to leave Damascus. “Morale has been damaged, but the regime is neither giving up the ghost nor preparing to abandon Damascus for some coastal Alawite enclave.”

Assad is young. Perhaps he thinks that he can outlast the rebels. He no doubt believes that maintaining his rule over even a portion of Syria is preferable to ruling over nothing. His current predicament of enduring the opprobrium of the international community is a great deal better than suffering the fate of Ben Ali (in exile in Saudi Arabia), Mubarak (in jail in Egypt, for now at least), or Gadhafi (in an unmarked grave in Libya).

An old dictator might give up, thinking that he doesn’t have much time left anyway. A young dictator, however, looks at all those years of exile, ignominy, and obscurity—not to mention the constant fear of retribution—and may well decide to do just about anything to avoid that scenario.

Outsid observers eager to write the epitaph for Assad are constantly looking for the tipping point: the key military victory for the opposition that will cause mass defections in the government army, inspire a palace coup in Damascus, or simply precipitate a cascade of losses as Assad’s forces fall back toward the capital.

What’s happening in Idlib Province doesn’t seem like that tipping point, but this wishful thinking is understandable. Assad continues to engage in outrageous cruelties, including the use of chemical weapons (as detailed by Annie Sparrow in a recent New York Review of Books article).

The “anything but Assad” approach begins to look pretty good in this context.

But of course most post-Assad futures look absolutely terrifying. The worst would be if the ISIS’s “caliphate” took over the entire territory, killing its enemies, forcing millions to flee, and pillaging whatever of value remained. It’s to be hoped that once Syrian Sunnis are no longer a persecuted majority, members of this diverse community will no longer be tempted by the millenarian messages of ISIS extremists.

It’s not clear whether Syria would be in any better hands if the Nusra Front took over and turned the country into a hospitable place for their friends in al-Qaeda. Turkey and Saudi Arabia seem to be banking on the new Army of Conquest to topple Assad, and the Front is the major muscle behind the new initiative. The United States has been uncomfortable with the Nusra Front and prefers to provide arms and training to the so-called moderate opposition. But in wartime, and in a chaotic environment like Syria, “moderate” is about as meaningful as “patriotic.”

What’s clear, however, is that the Obama administration believes that the ongoing rapprochement with Iran will do more to untangle the Gordian knot of Syria than a coherent strategy on the ground. Realizing this, Ankara and Riyadh have moved closer together to coordinate their anti-Assad efforts.

In theory, some kind of multipartisan political formation could replace Assad, perhaps even leaving him in place as a figurehead for the sake of appearances during a transition period.

But such a “political solution” has not gone anywhere, for Assad has resisted all pressure to compromise. The first chairman of the Transitional National Council, Burhan Ghalioun, puts it rather bleakly: “The talk is of a political solution in order to cloak a diplomatic vacuum and to nurture the illusion that something is being done at international level and that the people of Syria are not being abandoned, left to be massacred before the eyes of the world.”

The Syrian National Council is supposed to be the government-in-exile that could replace Assad, whether he leaves voluntarily or is forced out. But the council’s a mess. It’s disrespected inside Syria, riven by disagreements, and incapable of showing leadership. It has a relatively new head, Khaled Khoja, who has promised to remedy these ills. But he’s got a tough row to hoe.

So, if we are to expect a military stalemate for the near future, a stubborn and still young dictator refusing to compromise, and several bleak alternatives to the Assad regime, should we just make like the Obama administration and invest our geopolitical capital in a more promising portfolio?

It’s tempting to assume that Syria will be a mess for as long as Iraq has struggled with internecine conflict and insurgency (12 years and counting), Lebanon suffered a civil war (15 years), and Afghanistan has been in revolt and rebellion (since the 1970s, the 19th century, or 330 B.C. when Alexander the Great attempted to pacify the region—depending on which historian you consult).

But one thing’s for sure: Bashar al-Assad is not going to age out of office any time soon. He refuses to be ignored. One way or the other, we’re going to have to deal with the young dictator.

John Feffer is the director of Foreign Policy In Focus. This article was previously published on FPIF.org.