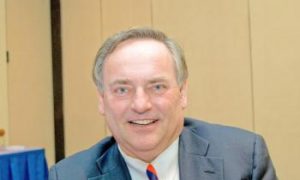 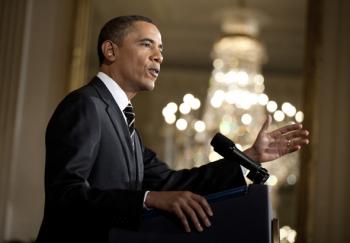 U.S. President Barack Obama speaks during an event in the East Room of the White House February 16, 2011 in Washington, DC. (Brendan Smialowski/Getty Images)
US

The President’s Budget: Investing in Productivity

Andrea Hayley
Reporting on the business of food, food tech, and Silicon Alley. Studied the Humanities for undergrad, and obtained a Master of Arts in business journalism from Columbia University. I love covering the people, and the passion, that animates innovation in America. Email me at andrea dot hayley at epochtimes.com
View profile
Follow
biggersmaller
Print
WASHINGTON—In his 2012 budget, the president is asking for the dollars to fund a vision that relies on targeted investments he believes will put the country back on top in a 21st century global marketplace.

Obama is advocating increasing investments in research and development, facilitating access to higher education and advanced skills training, and spending money to fix the country’s ailing infrastructure. Part of the infrastructure investment includes a national wireless initiative and an information revolution meant to leapfrog the country ahead in global economy.

Many of Obama’s initiatives started in the Recovery Act, which set aside $100 billion to fund research and innovation in areas like clean energy, electric vehicles, and information technology (IT). The president’s policies are aimed at making opportunities accessible to the greatest number of people.

Obama said in his budget preamble that America’s global leadership went unchallenged during the last century. Now, the country’s world standing in all indicators is declining, and the United States faces fierce competition from other countries.

“The winners of this competition will be the countries that have the most skilled and educated workers; a serious commitment to research and technology; and access to quality infrastructure like roads and airports, high-speed rail, and high-speed Internet,” stated Obama.

“These are the seeds of economic growth in the 21st century. Where they are planted, the most jobs and businesses will take root,” he added.

Without improvements in productivity, young people of today would face lower standards of living than their parents, said James Manyika, director of the McKinsey Global Institute and lead author of “Growth and Renewal, Retooling America’s Economic Engine.”

Manyika was speaking at the New America Foundation on Wednesday to announce release of a new McKinsey report.

The report analyzes productivity as a measure of economic performance and suggests that, more than ever, the United States must invest in productivity to drive growth and competitiveness. On an optimistic note, the report concludes that is the country would be able to meet or exceed productivity levels enjoyed in the past.

Productivity can be boosted either through efficiency gains (reducing input for a given output) or by increasing the value of goods and services produced for any given input.

The number one recommendation in the McKinsey report targets the 20 percent of the economy comprising public sectors, including health care and education. The report found that productivity improvements of 5 to 15 percent would bring the sectors on par with similar private sector organizations and result in savings of $100 billion to $300 billion.

Next: Many Americans hold the misconception that productivity gains equal job losses