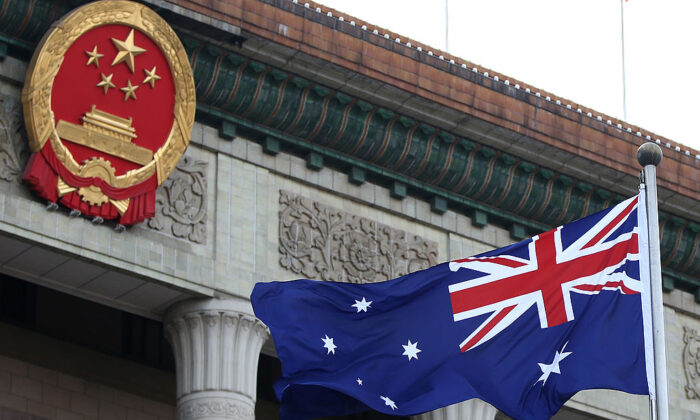 A general view of a Australian flag is seen during a welcome ceremony for Australia's Prime Minister Julia Gillard outside the Great Hall of the People in Beijing, China, on April 9, 2013. (Photo by Feng Li/Getty Images)
Viewpoints

The Politics of Retribution: The China-Australia Trade Disputes

Former Australian Prime Minister, Paul Keating, generated a wave of criticism when, in an address to the National Press Club on Wednesday, Nov. 10, 2021, he argued that China “does not represent a contiguous threat to Australia” and that Australia should not be involved in any dispute over Taiwan.

While a spokesperson of China’s Foreign Ministry lauded Keating’s comments in Australia, his address was criticised, even ridiculed, on the ground that he was dabbling in 1970s politics.

Specifically, commentators accused him of being patently wrong and ignorant of China’s demonstrable human rights abuses, geopolitical interests in South-East Asia, exemplified by the extinguishment of democracy and civil rights in Hong Kong, the occupation of the South China Sea and the East China Sea, and its continuing intimidation of Taiwan.

Additionally, Beijing vociferously criticises the AUKUS Security Pact for the Indo-Pacific region. This trilateral pact, concluded with the United States and the United Kingdom, allows for the acquisition of nuclear-powered submarines by Australia.

Beijing regards the existence of this pact as further proof of the belligerent attitude of Australia.

However, there is one demonstrable approach by the Beijing government that Keating’s critics may have overlooked.

Indeed, most journalists who commentated on Keating’s address could also have referred to China’s embrace of the politics of retribution, most recently exemplified by its imposition of steep import duties on Australian wine and barley and its discontinuation of the importation of other Australian commodities.

The politics of retribution—for example, the imposition of anti-dumping and countervailing duties—has little to do with alleged violations of the relevant regulations of the World Trade Organisation (WTO), but instead involve the use of WTO laws as a sword to attack China’s traditional trading partners.

The relevant WTO laws include Article VI of the GATT 1994—one of the constituent agreements of the WTO—according to which “dumping, by which products of one country are introduced into the commerce of another country at less than the normal value of the products, is to be condemned if it causes or threatens material injury to an established industry in the territory” of another WTO member.

Article XVI of the GATT 1994 imposes a notification obligation on the contracting parties that grant or maintain any subsidy.

The regime also imposed anti-dumping and countervailing duties on the importation of Australian barley.

Beijing alleged that the dumping of Australian wine destroyed the local wine-producing industry.

In accordance with the WTO’s Understanding on Rules and Procedures Governing the Settlement of Disputes (DSU), China and Australia entered consultations on Aug. 9, 2021. These consultations failed to resolve the dispute under the DSU.

Unable to resolve the dispute, Australia requested the Dispute Settlement Body (DSB), created by Article 2 of the DSU, to establish a Review Panel. However, China torpedoed this request, made on Sept. 16, 2021.

However, Australia’s second attempt was successful when the WTO announced on Oct. 24, 2021, the formation of a Review Panel and revealed that 15 countries had requested to be involved in the proceedings as third parties.

Commentators may well regard the imposition of anti-dumping and countervailing duties as retribution for Australia’s support for the establishment of an international fact-finding mission to investigate the origins of the CCP (Chinese Communist Party) virus.

Initially, China forcefully rejected such a mission as an interference with its territorial sovereignty, but eventually, it allowed a committee of experts to visit China for that purpose.

As is well-known, the mission could not agree on the origins of the virus but speculated that it probably involved a transfer from animals to humans.

However, reports that the virus may have originated in the Wuhan Virology Laboratory when conducting gain-of-function research have continued to circulate in the international press.

This type of research involves the super-imposition of new abilities on pathogens for study purposes, creating a modern-day version of the chimaera, a fire-breathing mismatched monster in Greek mythology.

China is now resisting another attempt by the international community to convene a fact-finding group to investigate the origins of the virus.

The relationship between China and Australia is thus parlous. Decades of close collaboration between the two nations has been severely tested.

The CCP’s actions, involving its dubious reliance on WTO laws, are not much more than examples of the politics of retribution.

The use of trade regulations for the purposes of achieving objectives, which are not related to trade, is a disturbing development.

This is because it involves the use of trade laws to attack, or at least to bully, a contracting party—in this case, Australia—and to use these laws as a sword rather than as a shield.

However, it is not the intention of the international trading community to use these regulations as a sword but as bona fide instruments to achieve trade liberalisation.

Beijing even admitted that its approach, involving the disruption of Australian exports, was retaliation for “groundlessly accusing and smearing China.” Nevertheless, the WTO does not allow this approach.

The promotion of trade dispersion could potentially stave off the collapse in Australia’s export performance.

It is the only way to ensure the realisation of Keating’s optimistic view of China.