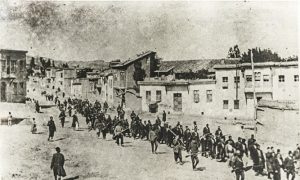 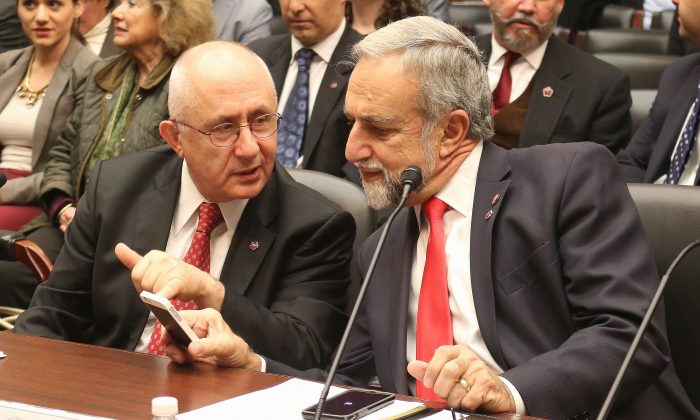 The Politics of Acknowledging the Armenian Genocide

WASHINGTON—April 24, 2015 marked the centenary of the beginning of the tragedy that resulted in the deaths of one and a half million Armenian people of the Ottoman Empire.

Driven from their homes and land in 1915, they were worked to death, deported, massacred, or left to wander suffering hunger, thirst, and exposure. When Raphael Lemkin invented the word, “genocide” in 1944, he said he had in mind what “Hitler did to the Jews and the Turks did to the Armenians.”

Despite the consensus of historians of the nature of the atrocities from 1915-1923, and the abundance of photographic evidence, government documents, and eye witness accounts, the government of Turkey has waged a campaign denying the genocide, and Turkey’s penal code today punishes those who say otherwise.

On April 12, Pope Francis characterized the Armenian Genocide as “the first genocide of the 20th century.” The pontiff said, “Concealing or denying evil is like allowing a wound to keep bleeding without bandaging it.”

Turkey responded by denouncing the Pope’s statement and recalling its ambassador to the Vatican.

In 1915 and years following, American media played a significant role in publicizing the massacres, torture, and expulsions of the Armenian population. The mainstream newspapers The New York Times, Washington Post, and the Boston Globe provided reports of the atrocities and efforts to save survivors, and covered the first international philanthropic campaign of the American people to provide aid, Koushakjian said.

Concealing or denying evil is like allowing a wound to keep bleeding without bandaging it.
— Pope Francis, April 12

President Obama used the “g-” word in 2008 when he was a candidate for president, and he criticized the Bush Administration for firing the ambassador to Armenia who referred to the genocide term.

Obama said, “I shared with Secretary [of State Condoleezza] Rice my firmly held conviction that the Armenian Genocide is not an allegation, a personal opinion, or a point of view, but rather a widely documented fact supported by an overwhelming body of historical evidence.”

Obama vowed that when he becomes president, he would not shirk from using the term.

However, on the seven occasions commemorating the April 24th anniversary during his presidency, the president has not uttered the ‘g’ word in order not to offend a close NATO ally, whose support we need in the Middle East.

The “Statement of the President on Armenian Remembrance Day,” April 24, says in part:

“I have consistently stated my own view of what occurred in 1915, and my view has not changed. A full, frank, and just acknowledgement of the facts is in all our interests. Peoples and nations grow stronger, and build a foundation for a more just and tolerant future, by acknowledging and reckoning with painful elements of the past. We welcome the expression of views by Pope Francis, Turkish and Armenian historians, and the many others who have sought to shed light on this dark chapter of history.”

I have consistently stated my own view of what occurred in 1915, and my view has not changed.
— President Barack Obama, April 24, 2015

“Turkey exerts political leverage and spends millions of dollars in the United States to obfuscate the Armenian genocide, with alarming success even at the highest levels of government,” stated David Holthouse, from the Southern Poverty Law Center, in 2008.

Congressman Chris Smith (R-N.J.), chairman of the Helsinki Commission, rebuked the president for breaking his promise. At a hearing he called on April 23, the day before the president was to release his statement, Smith listed the following countries as recognizing the Armenian Genocide: France, Germany, Italy, Sweden, Belgium, the Netherlands, Lithuania, Poland, Slovakia, Greece, and Cyprus, the Holy See, the European Parliament, Argentina, Canada, Chile, Lebanon, Russia, Switzerland, Uruguay, and Venezuela, according to the Congressional Research Service.

Needless to say, the president’s stance was a huge disappointment to those invited by the Helsinki Commission to testify on the 100th anniversary of the atrocities.

Michael Bobelian, journalist, and author of “Children of America: A Forgotten Genocide and the Century-Long Struggle for Justice” (2009), speaks April 22, at the National Press Club on American journalism and the genocide committed 1915-1923 to the Armenian people of the Ottoman Empire

Chairman of the Armenian National Committee of America Kenneth V. Hachikian said that “the fundamental basis for a true Armenian-Turkish reconciliation and an enduring regional peace” depends on Turkey openly acknowledging, and honestly discussing the Armenian Genocide. The denial of the genocide by Turkey has, “first and foremost,” a moral cost, he said.

He said later, “If we want reconciliation and establish peace between Turks and Armenians, we have to acknowledge the truth. Without truth, there cannot be peace.”

Akçam was the first scholar of Turkish origin to publicly acknowledge the Armenian Genocide. His books show in unprecedented detail the connection between the Armenian Genocide and the expulsion of Greeks from the late Ottoman Empire and an official effort to rid the empire of its Christian subjects, according to the publisher.

Akçam had access to official documents from the Ottoman imperial archives that had previously been heavily restricted. Consequently, the research in his books served as a breakthrough in documenting the premeditation of genocide by the government. Akçam, who now lives in the United States and teaches at Clark University, often receives death threats.

“Why is it that the question of recognizing the historicity of the Holocaust is not up for debate within political circles, while the Armenian genocide—despite its recognition within respectable academic circles—still is?” he asked.

Akçam said there was another Turkey with citizens ready to face history. “We Turks feel obligated to rectify the black stain upon us and upon our honor that was left by those who committed these crimes. … Our history does not simply consist of murderers. It is also a history of brave and righteous people who risked their lives to save thousands of Armenians.”

The importance of Turks taking this step is far reaching. Hachikian said that the country of Armenia, which borders Turkey, is not safe as long as “Turkish schoolchildren are taught that Armenians were traitors, the perpetrators were heroes, and the victims deserving of their fate.”

If we want reconciliation and establish peace between Turks and Armenians, we have to acknowledge the truth. Without truth, there cannot be peace.
— Dr. Taner Akçam, professor of history, Clark University

A second cost of “genocide openly committed and unapologetically denied,” said Hachikian, is that it emboldens more crimes—committed from Hitler to al-Bashir—when the international community fails to confront genocide. Hitler saw the Armenian Genocide as a prototype for his “solution” for the Jews, and believed the world would soon forget his own crimes.

“Who, after all, speaks today of the annihilation of the Armenians?” said Hitler, in 1939, when the Armenian catastrophe was nearly forgotten.

The resistance to acknowledge and confront genocide has been described as the “Problem from Hell.” The phrase comes from the title of the book on genocide by our United Nation’s Ambassador Samantha Power.

Other testimony underscored the vital role the United States plays in nudging Turkey to acknowledge the truth.

“There are people in Turkey who have very much gone out on a limb to help their country come to terms. Whenever the U.S. hedges, it is sawing the limb off and discouraging the next person from advancing,” said Van Krikorian, co-chair, Armenian Assembly of America.

The Armenian case has been for decades “an ethical dilemma posed to the media,” said Michael Bobelian, journalist, and author of “Children of Armenia: A Forgotten Genocide and the Century-Long Struggle for Justice (2009), who spoke at the National Press Club, April 22.

Journalists generally want to give both sides of a question, but raising doubts about atrocities does an injustice to the victims. Journalists don’t say, “the alleged Nazi crimes.” However, journalists aren’t historians; it is not their role to define “genocide.”

A historical consensus began to emerge about 15 years ago. Bobellian mentioned a few often cited authorities. The International Association of Genocide Scholars (1997) “…reaffirms that the mass murder of over a million Armenians in Turkey in 1915 is a case of genocide.” Also, 126 Holocaust Scholars (2000) “…affirm the incontestable fact of the Armenian Genocide.”

The New York Times revised its editorial policy in 2004 regarding the Armenian Genocide: “After careful study of scholarly definitions of ‘genocide,’ we have decided to accept the term in references to the Turks’ mass destruction of Armenians in and around 1915.”

According to the New York Times, the term Armenian Genocide would no longer be qualified by “alleged” or “what Armenians call.” Turkish denials could be reported when appropriate but they would no longer be coupled “with historians’ findings as if they had equal weight.”