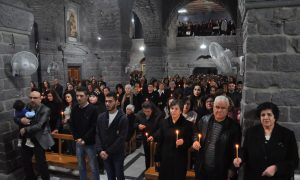 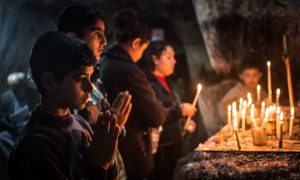 The Persecution of Christians in Africa and the Middle East
0 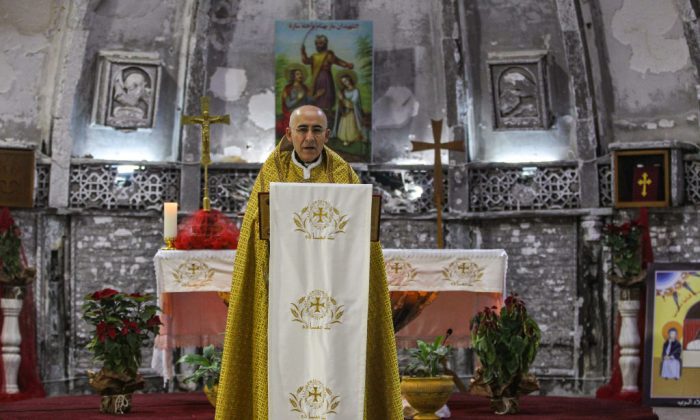 An Iraqi Syriac Catholic priest leads Christmas morning mass at the Mar Behnam and Mart Sarah Syriac Catholic Church, which was damaged and defaced during its occupation by Islamic State (IS) group fighters, in the predominantly Iraqi Christian town of Qaraqosh, in Niniveh province some 30 kilometres from Mosul, on Dec. 25, 2018. (Ahmad Al-Rubaye/AFP/Getty Images)
Viewpoints

The Persecution of Christians in the Middle East

During the holiday season, many people spend time thinking about Nazareth, Bethlehem, and the Middle East. Of course, most of those thoughts are about peace, love, and events from more than 2,000 years ago.

Current events in that region are not as nice.

In early December, the Archbishop of Canterbury Justin Welby warned that Christians in the Middle East are facing “imminent extinction.” He noted that followers of Christ “face daily the threat of violence, murder, intimidation, prejudice, and poverty.” That may come as a surprise to many observers who thought the significant threat had passed.

Not that long ago, the ISIS terrorist group (also known as Islamic State, ISIL, and by its Arabic language acronym Daesh) spread across significant parts of the Middle East known as the Levant. On July 4, 2014, Abu Bakr al-Baghdadi stood at the pulpit in the Great Mosque of al-Nuri in the Iraqi city of Mosul and declared an Islamic state (caliphate) under the leadership of a caliph (a religious successor to the prophet Muhammad). Soon ISIS-led military parades marched through the streets of Raqqa, Syria.

ISIS was a significant military threat to the world, certainly not the “junior varsity” that President Barack Obama suggested it was. It had about half as many soldiers as the British army, controlled a territory larger than the United Kingdom, and had access to sophisticated weapons seized from Iraqi forces.

Neither the Syrian Arab Army nor the Iraqi Armed Forces could contain its expansion, and the Obama administration wasn’t interested in getting involved in a new Middle East war. Therefore, it was very hard to see how ISIS would be stopped as the caliphate spread.

Moreover, ISIS fighters were certain of their ultimate victory. From the time they emerged in Syria and spread into Iraq, they believed they were carrying out a divine plan. The prophet Muhammad had predicted a future in which a revived caliphate would conquer the world shortly before the end of time, and these ISIS fighters and leaders were carrying out that prophecy.

With military strength and conviction of success came the ability and the inclination to abuse those who opposed their movement. ISIS leaders used brutality to spread confidence among their followers and terror among all others. Too often, non-Muslims were abused, forcibly converted, evicted, and sometimes beheaded or crucified.

Some women and girls were kidnapped into sexual slavery (and occasionally killed). Due to a combination of their expulsion and being converted or killed, the number of Christians in Iraq is now below 200,000, down from about 1.4 million in 2002.

In 2015, Pope Francis referred to the genocide of Christians under ISIS. In 2016, the U.S. Senate passed a resolution calling the atrocities perpetrated by ISIS against religious and ethnic minorities “war crimes, crimes against humanity, and genocide.” That same year, Secretary of State John Kerry used the term genocide to describe what was happening to non-Muslims under ISIS.

That designation was important, because groups designated as victims of genocide are more likely to receive military protection and preferential treatment as refugees under U.N. protocols. Unfortunately, the Obama administration—like most other governments around the world—disavowed the genocide label.

The explanation given by the State Department for rejecting the genocide designation was that ISIS gave Christians the option of paying a religious tax (jizya) to avoid facing forced conversion, eviction, or execution. In reality, however, the tax escalated until the non-Muslims were out of money; then the persecution accelerated. The jizya option was never a viable long-term solution.

Donald Trump spoke of ISIS’s genocide of Christians when he was a candidate. As president, he used military force to beat ISIS into submission. The caliphate eventually disappeared. Moreover, in December 2018, he signed the “Iraq and Syria Genocide Relief and Accountability Act” into law. Republican and Democratic Party members supported the legislation unanimously in both the Senate and the House.

The new law guarantees U.S. financial and technical assistance to Christians and other religious minority residents of Iraq and Syria who are persecuted by Islamic terrorists. In addition, the law enables the U.S. Department of State–in conjunction with other agencies–to conduct criminal investigations related to suspected terror plots, to apprehend alleged members of terror groups, and to identify warning signs of genocide and persecution in order to prevent future atrocities.

The End of ISIS?

With ISIS in retreat and the caliphate no longer in place, one might wonder about the need for this new legislation and the reason for the statement by the Archbishop of Canterbury. The unfortunate truth is that ISIS is not gone. It has retreated from the major cities, but it’s believed to be regrouping in small towns along the Syrian–Iraqi border, where ISIS is still evicting, persecuting, and even executing Christians.

When al-Qaeda in Iraq was declared defeated by U.S. officials in 2007, its membership was believed to be in the hundreds. It grew back and became the terror group we now know as ISIS. According to United Nations estimates, ISIS today has 20,000 to 30,000 members. It’s entirely possible that there are as many fighters loyal to ISIS today as there ever were. They have just lost their geographic center. They obviously could grow back into a significant threat.

The question that must be asked relates to the impact of the withdrawal of U.S. troops from Syria. The United States doesn’t need to act as a world police force, and we are glad to have our soldiers come home, but withdrawal from Syria might make it easier for ISIS to regroup and rebuild. Fortunately, lawmakers seem intent on keeping a close eye on the situation.

President Trump visited Al Asad air base in Iraq on the day after Christmas to meet with U.S. troops. While there, he said he has “no plans at all” to remove the approximately 5,200 U.S. troops that are currently serving in Iraq. Hopefully, they (and the significant Russian presence that remains in Syria) will provide a sufficient deterrent to ISIS.

The U.S. government also seems serious about the promise to provide support to the victims of ISIS persecution. That will likely include both humanitarian aid and the arming and training of militias for self-defense. Let’s hope the militias don’t become necessary and that 2019 brings Christians and other minority religions in the Middle East a brighter future.