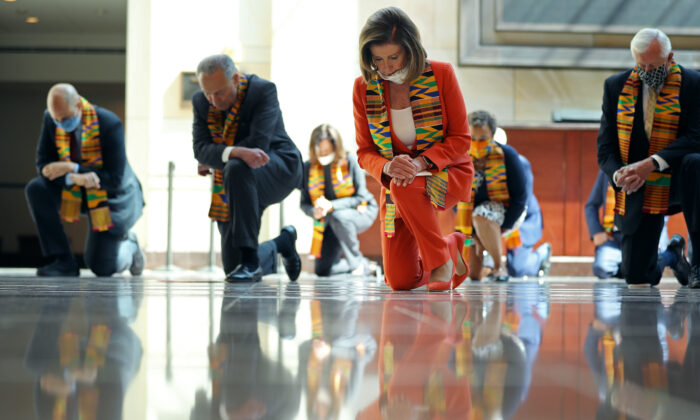 The People and the Elite

In this sorry time of cancellation and political correctness, as we watch a college dean suspend a professor because a few students complained about his insensitivity, or as we listen to a CEO intone his company’s commitment to social justice, or observe Democratic leaders don an African scarf and bend a knee, two reactions follow. I’ve seen them firsthand.

When I’ve noted those moments of pusillanimous caving and public posturing, one reply goes something like, “Oh, yeah, well, they gotta do that.” The words are spoken with an air of banal certainty, plus a little fidgeting and a silent hope that I’ll move on.

That reaction comes from a member of the elite. This person has an advanced degree of some kind and works in a noted institution, a university or a successful business or the upper portions of the state. He knows people who are like that dean, and he’s familiar with the circumstances that led to the decision. Our blasé observer judges with dispatch, turning quickly to the conditions of the upper-crust workplace. He prefers not to discuss the specifics of the particular case of the suspended professor. As he says, he knows what one has to do, what actions those high-rank positions require, and if you haven’t been there, you just don’t get it.

Which brings us to the other reaction. This one comes from well down the job and income ladder, from blue-collar workers and people without a college degree. (In spite of the you-must-go-to-college push of the past two decades, only about one-third of Americans possess a four-year degree.) When these lesser individuals hear a bigwig going on about systemic racism or some other politically correct topic, when they watch a news anchor go solemn and sincere as he describes a March for Women’s Rights or some other progressive demonstration, or a mayor bowing to Black Lives Matter protesters and softening up on law and order, they don’t give those figureheads one tiny bit of credibility.

“What a poser, what a weasel!”—that’s the judgment.

Whatever deference they once had to the well-credentialed and the higher-ups no longer exists. Barack Obama’s condescension killed it, and Hillary Clinton’s scorn for the “deplorables,” too, and Hollywood’s contempt, and the loathing on the part of the professors. When Donald Trump said after winning the Nevada primary in February 2016, “I love the poorly educated,” they understood exactly the context of his remark, that is, the abhorrence the other side felt for the un-colleged population. And they loved him back.

That’s not the whole dynamic, though. Yes, the lower classes have adopted a contempt of the elite to match the contempt that the elite feel for them. But there’s something else, too, another ingredient to the people’s low opinion of their superiors. They believe that it’s all an act.

The PC gestures, the obedience of the complainers and activists, the public apologies and pledges—they don’t trust them. They’re not credible. When the Ivy League college president laments the ongoing systemic racism on his campus, they know that he doesn’t really mean it. He’s just a canny bureaucrat out to keep his job. When Democratic leaders toss the label “fascist” into the public square, as did Howard Dean a few months back while characterizing Republicans, they consider it political jockeying, nothing more. These prominent notables expect that listeners will draw the right moral conclusions from their words, but such uncooperative, uneducated Americans persist in chalking the words up to selfish tactics. They’re a perpetual disappointment to their betters.

In other words, we have one part politicking and three parts cheap self-promotion. The ordinary American worker and homemaker judges the elite as just that: self-serving, always self-serving. The moral language of the elite they interpret as a mask, a routine. Our aristocrats mouth the pleasing-sounding words diversity–equity–inclusion because the institutions obligate them to do so, but the performances just don’t fly with people outside those institutions.

The politicians, professors, journalists, and celebrities at the top of the heap want to prove how much they care about others at the bottom, but the people looking up believe the opposite: You don’t care about us and you don’t care about our country. The elite would like everyone to focus on their high-minded phrases, but what the rest of America notices are the cameras and microphones, the attendants and caravans and fancy clothes.

Americans also notice how nasty elite figures become when they realize that the general public prefers traditional views about family, country, God, and sexuality. It doesn’t take much for the guise of elite benevolence to fall, and ordinary Americans aren’t as stupid as elites believe. They recognize quite well the performances for what they are: part of the job, career moves, demonstrations of an elite’s fitness for the select position he occupies.

This brings us back to the first response of the elite to my remark about the latest act of elite compliance with illiberal demands: “They have to do it—they have no choice.” This is a confession of private gain. It shows that, in elite circles, job status and career prospects count for more than just about anything. People on the make work very long hours to get ahead. Once they’ve gotten there, they want to stay there, and that requires that they track allies and rivals closely, and monitor their own behavior according to how it will come off in others’ eyes.

Issuing the occasional apology, bending to the will of a few grumbling troublemakers, smacking down an un-politically-correct underling, pledging to do more and do better—they’re just a cost of doing business. They keep the resume clean.

There’s a cost to this careerism, though, a moral one. In my conversations with liberal acquaintances in nice positions, I’ve been amazed by their tolerance for this generalized mendacity. The system of advancement has so blunted their moral scruples that when they witness someone suffer a canceling of some ridiculous kind, they feel no righteous indignation. They may shake their heads in a transient show of sympathy, but they soon move on to remark how heedless the victim was, and to realize more than ever not to commit a similar crime. They’re not going to put themselves at risk; they’ve worked too hard for too long to lose the good graces of their employers and peers.

Liberalism prizes above all things the free individual, the rational self creating its own destiny. These elite liberals, though, aren’t individuals and they aren’t free. They’re company men and women, institutional animals, and their inferiors know it.