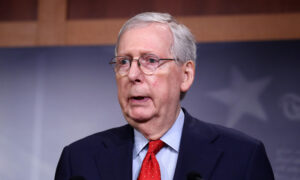 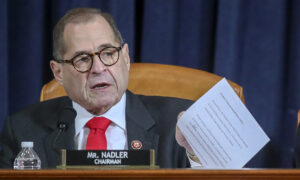 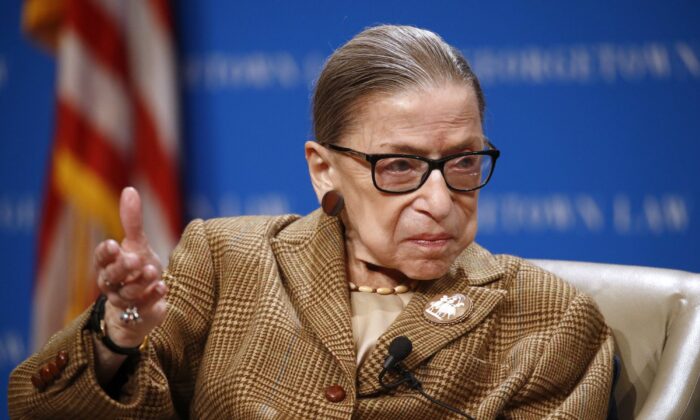 Supreme Court Associate Justice Ruth Bader Ginsburg speaks during a discussion on the 100th anniversary of the ratification of the 19th Amendment at Georgetown University Law Center in Washington on Feb. 10, 2020. (Patrick Semansky/AP Photo)
Viewpoints

The Passing of Ruth Bader Ginsburg and the Correct Call to ‘Fill That Seat!’

U.S. Supreme Court Justice Ruth Bader Ginsburg passed on Sept. 18. Ginsburg, a feminist and role model for some women across America, is being lauded as a “legal giant” and “trailblazer,” accolades being doled out across political boundaries. Ginsburg was dedicated to jurisprudence tasks, even pouring over legal briefs from her hospital bed.

But what did Ginsburg trailblaze, and in what sense was she a legal giant? From the bench, Ginsburg politicized jurisprudence, “fighting for” women’s equality and pay, the rights of the disabled, and the environment. She was in the minority on the 5-to-4 Bush v. Gore decision, which appointed George W. Bush as president—a precedent she will not be able to reproduce in the 2020 presidential election. A sign of her political activism, Ginsburg signed her opinion “I dissent,” rather than “I respectfully dissent,” like her other colleagues in the minority.

While a political advocate for women’s rights, Ginsburg also pushed for unlimited “reproductive rights,” thereby asserting the right to unilaterally end the lives of babies of both sexes. She even asserted that taxpayers should cover the costs of abortions for women who could not afford them. Not only advocating for gender “equality” in abortions, she went further than arguing that the sexes were “equal.” She also suggested that the sexes were the same. She pursued the sex integration of the Boy Scouts and the Girl Scouts, because they “perpetuate stereotyped sex roles.”

While few can deny Ginsburg’s brilliance, many can impugn her activist approach, despite or because of her unyielding dedication to the cases before her.

Even as mourners gather outside the Supreme Court bearing candles and leaving flowers and other tokens to commemorate the life of Ginsburg, ominous warnings are emerging across the United States. On social media, one finds calls for attacks on Republican senators, full-scale riots, and an explicit threat on Twitter to “burn the entire [expletive] thing down” should Trump nominate and the Senate attempt to confirm Ginsburg’s replacement.

Meanwhile, at a Sept. 19 rally in Fayetteville, North Carolina, thousands of President Donald Trump’s supporters called for POTUS to “Fill That Seat!” Trump also took a live “poll” of the crowd, where an overwhelming number of rally attendees agreed with the president that a woman should fill the Supreme Court vacancy.

Amy Coney Barrett, the first and only woman to occupy an Indiana seat on the 7th Circuit Court of Appeals and a professor of constitutional law at Notre Dame Law School, is emerging as a top contender for the replacement of Ginsburg by Trump. During the Brett Kavanaugh confirmation hearings, Trump reportedly asserted that he was saving Barrett as a replacement for Ginsburg, according to a 2019 report in Axios.

As Sen. Ted Cruz (R-Texas) pointed out on “Hannity” on Sept. 18, it’s imperative for Trump to act with urgency on any SCOTUS replacement. Hillary Clinton has stated that Joe Biden shouldn’t concede the 2020 presidential election “under any circumstances.” That would mean that, without a replacement, the election could be decided by a 4-to-4 Supreme Court.

Conservatives and Trump supporters certainly can’t rely on Bush’s John Roberts to side with Trump in any disputed 2020 election outcomes. The same deep-state elements who in 2000 demanded the installation of George W. Bush (Democrats and establishment Republicans) will be adapting a “by any means necessary” mantra for Joe Biden’s installation in 2020. The only difference is that the candidate is a Democrat, and their battle positions will be buttressed by a ubiquitous, deeply biased social media.

While some celebrate the accomplishments and memorialize the impact of Ginsburg, all patriots should demand that Trump act with utmost haste in nominating a constitutional originalist to the Supreme Court. These positions aren’t exclusionary.

We can’t fear the consequences of an obstreperous and outraged left. We’ve already endured the “Summer of Love,” which has included shootings, burnings, and riots. Trump and Attorney General William Barr can respond by invoking the Insurrection Act, if necessary. The left can’t be allowed to intimidate the president, and the Senate must act swiftly to obviate an election disaster.

Michael Rectenwald, Ph.D., is a former professor at New York University and author of “Beyond Woke,” “The Google Archipelago,” and “Springtime for Snowflakes.”