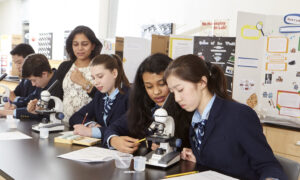 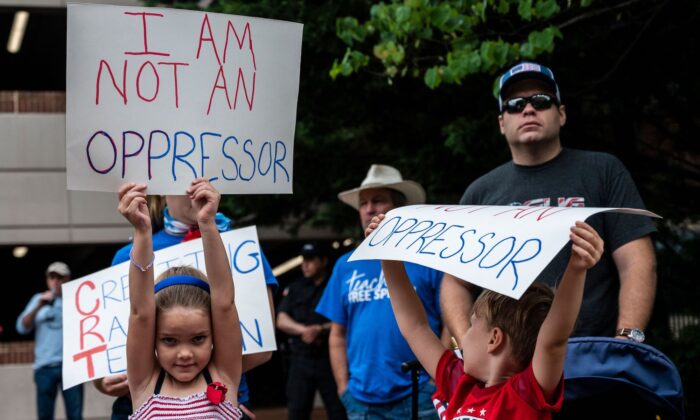 Community members hold up signs during a rally against at the Loudoun County Government center in Leesburg, Va., on June 12, 2021. (Andrew Caballero-Reynolds/AFP via Getty Images)
Viewpoints

The Other Problem With Critical Race Theory

Educational fads such as critical race theory (CRT) teach messages that are wrong or distorted. But this essay focuses on another concern: They also waste class time and scarce resources that should be used to cover more important subjects. They induce teachers to take their eyes off the ball.

Properly speaking, CRT is not a “theory” at all. Theories are based on controlled experiments and testing, or, in the social sciences, on empirical research. CRT is, at most, a tentative hypothesis. It relies unduly on anecdotes, and its “conclusions” seem dictated by its proponents’ political biases.

A recent article in Education Week argues for injecting CRT into school curricula. The author, who tells us she learned about the subject in law school, appears well-meaning. Nevertheless, her article illustrates the confusion and ignorance behind CRT.

For example, she claims that humans share 99.9 percent of the same genetic material—apparently unaware that the figure is under challenge as being too high. From that, she jumps to the conclusion that race is merely a “social construct”—thereby ignoring the effects of the remaining genetic differences.

Later in her article, she seems to assume that there are racial differences after all. She condemns bans on students wearing dreadlocks, because those wearing them are almost exclusively African Americans. This is so, however, because most African Americans’ hair differs in composition from that of, say, whites or Asians. That’s the effect of genetic differences that certainly don’t make up a mere “social construct.”

The author also tells us that CRT isn’t about substance; it’s merely a “practice”—a procedure. But practices have substantive results. She even lets some slip out. She tells us that CRT enables students to learn about race-related events of which they might otherwise be ignorant, such as the Tulsa Massacre and how “Native American children were forcibly removed from their families.”

The author seems unaware that any class time you spend on “ain’t it awful” events is time not spent on subjects that are far more important to the life success of students of all races. After all, good pedagogy is only partly about how to teach the material. It’s also about knowing what material to teach. A good teacher knows he or she doesn’t have time to waste.

Understanding English words often begins with knowing their German or Latin roots, and so it is with education. “To educate” comes from educere, the Latin word meaning “to lead out.” In Latin usage, it may be the most common term for “to rear” or “to bring up.” (Merely formal education is represented by another verb, erudire.) Parents and other educators lead students out of ignorance and savagery—by the substance of what they communicate, the skills they teach, and the role models they provide.

Through education, we create responsible, mature, and knowledgeable adults.

Education is, therefore, more than a job. It’s a sacred trust we owe both to our young people and to the society they will impact. Our educational system has abused that trust. A few years ago, for example, an Intercollegiate Studies Institute survey found that few colleges significantly increased students’ civic knowledge and many—particularly elite universities—actually reduced it.

The situation isn’t much better at the K–12 level. Nearly 40 years and billions of dollars after the famous “Nation at Risk” report (pdf) sounded the alarm about the quality of American K–12 education, our international standing on tests of reading, math, and science remains notably mediocre.

I can confirm these generalizations from my personal experience. I taught in law schools for a quarter of a century. My students were smart. They had high school and college diplomas. Most had won high grades. Yet the overwhelming majority knew relatively little about our heritage and institutions. Very few had been well-schooled in the contributions of classical antiquity, Western history, high culture, or even the American constitutional system. Some were mathematically challenged as well.

One reason for these deficiencies was that their schools wasted time on educational fads. They neglected to teach what’s important.

To be sure, the Tulsa Massacre cost many lives and the Boston Massacre cost “only” five. (One of these five was a patriot who was half Native American and half African American.) Still, for American students, the Boston Massacre is objectively more important because it played a central role in triggering a pivotal event in U.S. history: the American Revolution. If schools spend less time, or no time, on the massacre in Boston because they are covering the one in Tulsa, then they’re doing their students a disservice.

Similarly, for students who will live within Western civilization, learning how the Judeo-Christian and European heritage fashioned that civilization is likely to prove far more useful than learning about kingdoms in Mali, Peru, or China. Rigorous training in a foreign language is likely to bring far more insight into other cultures than the “diversity” sidebars that litter modern textbooks.

The traditional school curriculum is traditional for a reason: It has stood the test of time. School resources are too precious to divert elsewhere.

Robert G. Natelson served as a law professor for 25 years and taught law part-time for six years before that. His academic training and research interests include law, history, and classical antiquity. He is senior fellow in constitutional jurisprudence at the Independence Institute in Denver and the author of “The Original Constitution: What It Actually Said and Meant” (3rd ed., 2014).