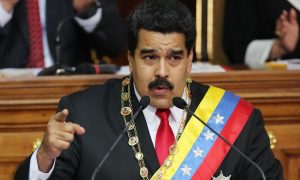 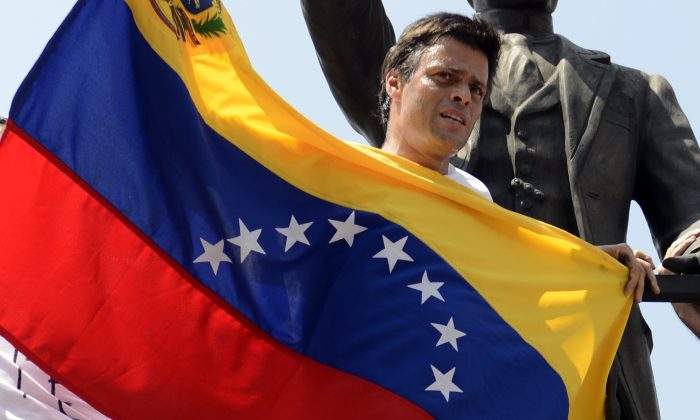 The Ordeal of a Latin American Political Prisoner

WASHINGTON—The sister of Venezuelan opposition leader Leopoldo López said her brother has been framed for homicides and violence for which he had no part. He is currently being held in solitary confinement in the Ramo Verde military prison outside of Caracas, and is not allowed contact with other prisoners.

Before his arrest last year on Feb. 19, López was known for rallying hundreds of thousands of supporters. The 43-year-old Harvard graduate is a former mayor of a Caracas municipality.

Since his arrest, López has become a human rights cause célèbre, and one of Latin America’s most prominent political prisoners. Many Latin American observers said that his stature has grown as the leading opponent of the socialist government of President Nicolás Maduro.

On Feb. 26, marking the anniversary of his incarceration, Adriana López defended her charismatic brother at the Center for Strategic and International Studies (CSIS) in Washington.

Adopting the same self-assured and defiant tone of voice as her brother, López said, “I think the [Maduro] government fears anyone who has no fear. … [Leopoldo López] is not afraid to confront the government,” she said.

I think the [Maduro] government fears anyone who has no fear.
— Adriana López, sister of Leopoldo López, Venezuelan political prisoner

She said that when she visited him three weeks ago, he was optimistic. “Adriana, I am well. I have been preparing myself for this for a long time,” he told her. He was referring to the time when he was persecuted under the late Hugo Chávez, whom Maduro replaced after Chávez’s death.

Held in a tiny cell, he is restricted to seeing only immediate family members and lawyers. While he is not physically being tortured as other political prisoners in Venezuela, he is subject to cruelty. Held in solitary confinement, he will go without seeing daylight for days. Adriana López said that the guards will throw excrement and urine on him and then turn off the water and electricity so that he can’t clean himself.

They know how much he wants to see his sister Adriana, and so visitation may be denied, she said.

Of course, he misses his two children, now ages 5 and 2. In a heartbreaking moment, his daughter once asked him, “Are you going to die in prison?”

López was charged with incitement to riot, arson, and public property damage. Government prosecutors said López was responsible for the riots and 43 deaths that occurred during February protests leading up to a big rally in downtown Caracas on Feb. 12, 2014.

For two weeks López had been exhorting Venezuelans to the streets in a campaign called The Exit or The Solution—a rough translation from Spanish.

He contends that he only promoted constitutional change, calling on Maduro to step down in response to the massive public discontent expressed in the peaceful protests.

Are you going to die in prison?
— 5-year old daughter of Leopoldo López, Venezuelan political prisoner

“For Venezuelans, a change in leadership can be accomplished entirely within a constitutional and legal framework,” he wrote in a letter to the New York Times.

For one week after the Feb. 12 rally, he went into hiding. He turned himself over to authorities on Feb. 18, 2014, in front of thousands of his supporters, where he said:

“If my jailing serves to awaken a people, serves to awaken Venezuela … then it will be well worth the infamous imprisonment imposed upon me directly, with cowardice,” he shouted through a megaphone from atop a statue of 19th century Cuban independence hero José Martí in a Caracas plaza, according to CBS news.

López’s mass demonstrations bear a resemblance to the protests that erupted during the Arab Spring that began in December 2010, when protesters took to the streets in Tunisia, followed by Egypt, Libya, Bahrain, and Syria in an effort to topple their authoritarian rulers.

Many from the more moderate opposition in Venezuela oppose these street tactics, because it distracts Venezuelans’ attention from economic problems, according to a Reuters report.

The Venezuelan national guard and government-sponsored vigilante groups attacked the largely unarmed protesters with live ammunition, water cannons, and tear gas, according to Ana Quintana, from the Heritage Foundation. “Journalists attempting to cover these crimes have been physically attacked, stripped of their visas, and even kidnapped,” she wrote.

López, the former mayor of a Caracas municipality, is more directly confrontational than the well-known Venezuelan opposition leader Henrique Capriles, who lost two close national elections, most recently to Maduro in April 2013.

“He is a man that is very clear in his positions. He does not define himself in the grey area,” his sister said.

Dozens of other mayors and former mayors, and members of the opposition have been arrested too. Most recently, on Feb. 19, “a group of men in black and gray camouflage, wearing bulletproof vests … and some wearing masks,” according to the Huffington Post, broke down the door of the office of Caracas Mayor Antonio Ledezma. They seized the 59-year-old mayor without explanation, according to his daughter Antonieta Ledezma, who appeared on Al-Jazeera on Feb. 27.

Because no warrant for his arrest was shown, she said her dad had been kidnapped. He was charged with plotting a coup that included the United States to bring down the government, a charge that the State Department dismissed as “baseless and false.”

Maduro personally called for López’s arrest and imprisonment, an indication that his trial is not likely to be impartial.

Amnesty International said the arrest was a “politically motivated attempt to silence dissent.”

Both the president of the Venezuelan National Assembly and the foreign minister accused López of being responsible for the violence during the anti-government protests. The following day a warrant was issued for his arrest.

These accusations, together with President Maduro’s pronouncement that López is guilty and will pay for his sins, are contrary to the presumption of innocence.

There is no evidence that López was even present when three protesters were killed on Feb. 12. In the Times letter, he said, “An analysis of video by the news organization Últimas Noticias determined that shots were fired from the direction of plainclothes military troops.”

He is a man that is very clear in his positions. He does not define himself in the grey area.
— Adriana López, sister of Leopoldo López, Venezuelan political prisoner

Human rights attorney Jared Genser said at CSIS event that it was the security forces who opened fire, not the protesters or López, who was not present at the scene of anyone killed.

Genser, who works to free prisoners of conscience, is a member of the López defense team.

The prosecution is trying to make a case that López’s speeches incited the crowd with “subliminal messages,” he said.

The defense had 60 witnesses and some videos that showed that the rallies were peaceful. The judge threw out all but 2 of the witnesses and all the videos, according to Genser. The prosecution has been allowed about 100 witnesses.

It’s unlikely López will be released anytime soon. Since 2004, the government has carried out a political takeover of the judiciary, which “has largely ceased to function as an independent branch of government,” according to Human Rights Watch (HRW).

“In a country where the judiciary lacks independence, Leopoldo López’s future is in the hands of a judge who could be removed by a telegram without any explanation, as it has routinely occurred in the past. The decision on the future of the judge, in turn, is in the hands of judges of the Supreme Court, a body that has routinely upheld government policies,” states HRW.

“Leopoldo López is a classic prisoner of conscience,” Genser said. He said the charges are “outrageous.”

López sees his case as one of resisting an oppressive political climate. One month after his detention, he wrote the aforementioned letter that appeared in the New York Times on March 25, in which he called attention to the government’s egregious human rights violations.

“Since student protests began on Feb. 4, more than 1,500 protesters have been detained and more than 50 have reported that they were tortured while in police custody. Over 30 people, including security forces and civilians, have died in the demonstrations. What started as a peaceful march against crime on a university campus has exposed the depth of this government’s criminalization of dissent.”

Further, López wrote, “The pro-government paramilitary groups, or “colectivos,” that have tried to silence the protests through violence and intimidation must be disarmed.”

Besides human rights abuses, López describes what’s wrong in Venezuela under the 15-year rule of Hugo Chavez and his successor Nicolás Maduro.

The Venezuelan “crippled” economy has a 57 percent inflation rate and “a scarcity of basic goods unprecedented outside of wartime,” he wrote. And Venezuela suffers from an extraordinary high murder rate.