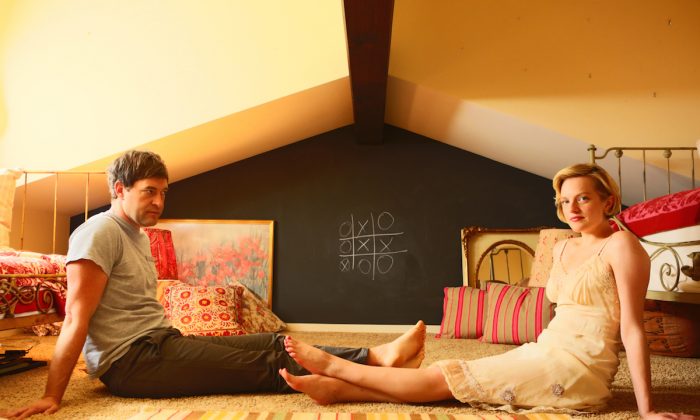 Mark Duplass and Elisabeth Moss in “The One I Love.” (RADiUS-TWC)
Entertainment

‘The One I Love’: Getting Surreal in the Guest House

Many in the entertainment industry can relate to the frustration of undergoing therapy only to find the underlying issue getting steadily worse—and therefore perhaps identify with Charlie McDowell’s feature directorial debut (a hit at Sundance, Tribeca, and Fantasia).

In this case, his protagonist’s marriage continues to disintegrate, despite their couples counseling. As a last resort, they will spend a romantic weekend in a specially recommended resort home, but their getaway takes a strange turn in McDowell’s “The One I Love.”

Ethan was already losing Sophie before his unspecified infidelity, but it has become a handy cudgel for her to wield. Nonetheless, she agreed to the counseling sessions that have thus far proved fruitless. Taking a different tack, their therapist refers them to an idyllic hideaway, where they can hopefully rekindle and reconnect. However, there is a genre film surprise in store for them there.

Although it comes relatively early, there is a general understanding that the nature of the film’s big twist should not be spoiled. It is safe to say that the guest house will rock their world. In terms of tone, McDowell’s film is sort of like the more comedic installments of “The Twilight Zone”—think of Keenan Wynn in “A World of His Own,” except darker.

By accepting the unofficial ground rules, reviews of “TOIL” must be torturously vague at times. Frankly, Mark Duplass and Elisabeth Moss give remarkably good performances, but it would be spoilery to explain why. Still, it is safe to say we can easily buy in to them as a couple with some problematic history.

Ted Danson (McDowell’s stepfather) also makes the most of his brief appearance as their mysterious therapist. In fact, “TOIL” was a real family affair, with McDowell’s mother, Mary Steenburgen, contributing her voice as Ethan’s mother (heard via cell phone) and his famous significant other pseudonymously doing the costuming.

Thanks to the way the leads sell its double-secret premise, “TOIL” works quite well as fantastical dramedy. The jokes (improvised and scripted) are quite clever, and editor Jennifer Lilly cuts it all together impressively seamlessly. (Again, you have to see it to understand what a feat this is.)

You know when bacon plays a pivotal role in a movie, there must be something good on tap. “TOIL” is indeed that film. Nicely executed by cast and crew, “The One I Love” is recommended for those looking for an anti-rom-com when it opens this Friday, Aug. 22, in New York at the Angelika Film Center.