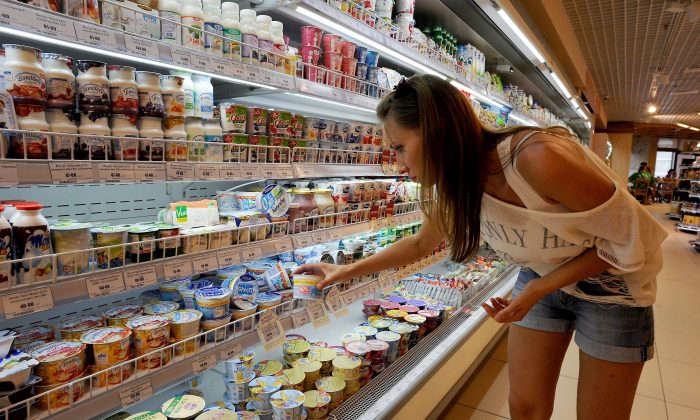 The food industry may be sitting on its next product goldmine—and most of us probably haven’t heard about it yet.

Microbiologists employed by the world’s largest food companies are still busy working on the research and development (R&D), so we can only guess what some of these new product creations will look like. What we do know is that there are going to be many, many.

“In the coming years, you will be hard-pressed not to find miles and miles of food aisles with products that promote our microbiome,” said Jeff Leach, founder of the Human Food Project, and a pioneer in the rapidly advancing field of research involving the human microbiome.

Research in this area is mind-blowing in terms of the medical treatment possibilities it opens up for modern diseases like diabetes, cancers, and obesity.

Many researchers now acknowledge that it is possible (and probably advisable) to eat foods that “feed” our microbiome.

Leach, who got into the field a decade ago when his daughter was diagnosed with type 1 diabetes, has already co-invented a granola bar—the Human Food Bar—designed to feed the approximately 100 trillion microbes, or bacteria, archaea, fungi, protists, and viruses that we now know live in our bodies. Apparently, our human cells, numbering around 37 trillion, are outnumbered 3 to 1 by our microbes. Some researchers put that figure as high as 10 to 1.

Knowledge of the microbiome leaped forward after a $200 million grant to the National Institutes of Health in 2007 involving 80 institutions allowed scientists to sequence samples from close to 250 volunteers and establish a baseline for further study. In a frequently asked question (FAQ) response scientists with The American Academy of Microbiology said it is “reasonable to characterize the microbiome as a newly discovered human organ, with a great range of metabolic activities.”

And many researchers now acknowledge that it is possible (and probably advisable) to eat foods that “feed” our microbiome. Step aside low fat, high protein, low carb, low calorie, low sugar whatever. Enter the era of healthy bacteria, probiotic, prebiotic, and fermented foods that foster a happy gut.

Among the typical ingredients in the Human Food Bar, such as almonds, honey, raisins, and apricots, are two lesser knowns targeting our microbes’ specific dietary needs: an organic prebiotic fiber known as agave inulin, and Baobab powder, which comes from a vitamin C-rich fruit from trees in Africa that can survive as long as 1,000 years.

Prebiotics are nondigestible fiber compounds that pass through the upper part of the gastrointestinal tract and stimulate the growth of good bacteria in the bowel by acting as food for our microbes.

Probably the most breathtaking change in human diet is the drop in fiber intake, which is literally starving our microbes.
— Jeff Leach, Human Food Project

Baobab fruit, which is high in antioxidants and soluble fibers, is eaten by the Hadza hunter-gatherer people in Tanzania, whom Leach studied. The Hadza dig tubers, harvest wild fruit and honey, and shoot game with a bow and arrow, and they’ve lived in this manner for an estimated 50,000 years.

Leach, as part of his work with the Human Food Project, has taken numerous samples of the Hadza microbiome. He’s fascinated with learning how it could be different from that of modernized humans, and what we could learn from that.

“Probably the most breathtaking change in human diet is the drop in fiber intake, which is literally starving our microbes,” said Jeff, adding that Americans get on average less than 20 grams of fiber a day, while the Hadza eat from 50 to 200 grams daily.

The Human Food Bar, which has 9 grams of fiber, aims to feed the microbiome, and hopefully nudge it in the direction of greater health.

Right now it’s only sold online, and is promoted to the 150,000 subscribers to the organization’s work with indigenous people like the Hadza.

Proceeds from the bar are used to fund more research.

In the last year, in addition to government funded and institutional research, a burgeoning venture capital industry focused solely on investing in microbiome research has begun to take shape.

According to Fortune journalist Erika Fry, who visited the company’s Netherlands facility, Danone is using a highly sophisticated piece of technology that simulates the human gastrointestinal tract to test how different ingredients may react in the body. They are trying to discover which additives will benefit the microbiome, and how to bring these products to market.

The market for probiotics, or beneficial microbes, grew in size to nearly $30 billion last year, according to BioMedTrends, summarizing a report by Global Industry Analysts.

According to the report, enhanced manufacturing has led to a proliferation of new products containing probiotics, such as chocolates, cheese, muffins, and sausage.

Naturally occurring probiotics, found in many fermented foods that can be purchased or made at home, are also becoming increasingly popular in the United States.

What Is the Human Microbiome?

Source: “Human Microbiome FAQ” by The American Academy of Microbiology