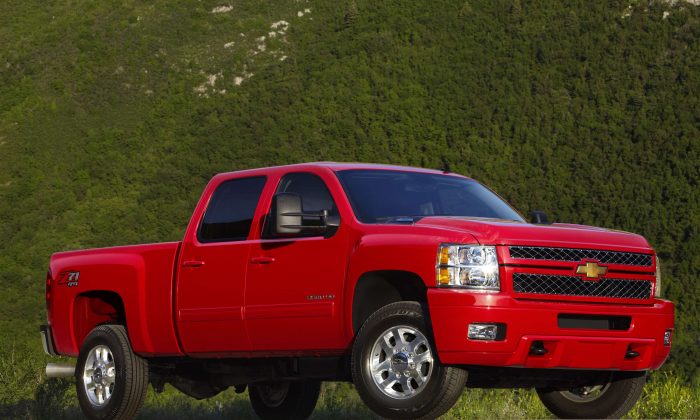 Some folks in the auto industry have felt that the Chevrolet Silverado has played second or third fiddle to the Dodge Ram and Ford F-150. But 2014 may be played on a different note.

Historically, Chevrolet has had a base of loyal fans and owners from generation to generation. In fact, General Motors is the only pickup manufacturer that offers three primary categories: compact, full-size, and heavy-duty. Both Ford and Ram offer only full-size and heavy-duty. While Toyota and Nissan only manufacture compact and full-size. These two Japanese auto companies are finally managing to gain a toehold in the domestic truck market.

A few months ago, Chevrolet launched their new Silverado at the famous Knibbe Ranch near San Antonio, Texas. Texas was the perfect state for a truck launch, since the pickup culture in the state makes them a perennial number one in truck sales for the nation.

So as buffaloes grazed quietly but ever alert, and white-tail deer sulked nervously in stands of post oak trees, journalists from across the country put Silverado through its paces.

The ride from a downtown hotel to the ranch had been pleasant because the Silverado drove like a sedan, hungrily passing traffic at an easily set pace, and at the same time keeping its testostrogen markings associated with a rugged vehicle.

Each year the Texas Auto Writers Association has their Texas Truck Rodeo at the Knibbe Ranch. All types of trucks and SUVs compete head to head on track and off-road courses. The off-road course is most challenging. Streams, a river, stately bluffs, and rock-filled gorges do their best to inhibit vehicles from successfully completing the course.

It appeared the ranch construction engineers built an even more difficult and impressive course for the Silverado adventure. The GMC trucks I drove completed the course admirably, with an appearance of little effort.

The Silverado comes with Chevrolet MyLink. MyLink is an infotainment center linking up to 10 devices such as a Smartphone, SD card, and MP3 player, giving customers more ways of staying connected. MyLink uses natural language voice recognition to browse media, play music, and control other functions with no need to look at the screen. However, I preferred using the touch screen with large, clearly labeled knobs, or the steering wheel control.

The Silverado tailgate has a function called the E-Z Lift and lower feature. It operates like a pneumatic screen door which slowly closes rather than slamming shut. The gate moves slowly and methodically up and down, so there is absolutely no slamming.

On the cargo bed, Silverado engineers have created a new method of easy ingress/egress with a corner step built into each side of the rear bumper. There are also ergonomically constructed hand slots on the bed railings so one can grab onto them, helping to attain a grip when climbing into the bed.