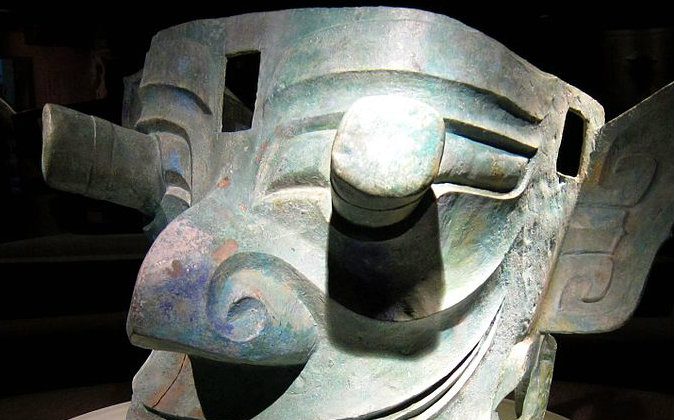 Amid the once-tranquil village of Sanxingdui, in a quiet part of Sichuan province in China, a remarkable discovery took place which immediately attracted international attention and has since rewritten the history of Chinese civilization. Two giant sacrificial pits were unearthed containing thousands of gold, bronze, jade, ivory and pottery artifacts that were so unusual and unlike anything ever found in China before that archaeologists realized they had just opened the door to an ancient culture dating back between 3,000 and 5,000 years.

In the spring of 1929, a farmer was digging a well when he discovered a large stash of jade relics. This was the first clue that eventually led to the discovery of a mysterious ancient kingdom. Generations of Chinese archaeologists searched the area without success until 1986, when workers accidentally found the pits containing thousands of artifacts that had been broken, burned, and then carefully buried.

The discovery of the artifacts opened up a world of intrigue. The objects found in the sacrificial pits included animal-faced sculptures and masks with dragon ears, open mouths and grinning teeth; human-like heads with gold foil masks; decorative animals including dragons, snakes, and birds; a giant wand, a sacrificial altar, a 4-meter-tall  (13-foot-tall) bronze tree; axes, tablets, rings, knives, and hundreds of other unique items. Among the collection was also the world’s largest and best preserved bronze upright human figure, measuring 2.62 meters (8 feet).

However, by far the most striking findings were dozens of large bronze masks and heads represented with angular human features, exaggerated almond-shaped eyes, straight noses, square faces, and huge ears, features which don’t reflect those of Asian people.

The artifacts were radiocarbon dated to the 12th-11th centuries BC. They had been created using remarkably advanced bronze casting technology, which was acquired by adding lead to a combination of copper and tin, creating a stronger substance that could create substantially larger and heavier objects, such as the life-size human statue and the 4-meter-tall (13-foot-tall) tree.

Some of the masks were enormous in size – one measures an incredible 1.32 meters (1.33 feet) in width and 0.72 meters (2.36 feet) in height, the largest bronze mask ever found. The three largest masks have the most supernatural features of all the Sanxingdui artifacts, with animal-like ears, monstrously protruding pupils, or an additional ornate trunk.

Researchers were astonished to find an artistic style that was completely unknown in the history of Chinese art, whose baseline had been the history and artifacts of the Yellow River civilization(s).

The spectacular discovery at Sanxingdui in 1986 turned Sichuan into a focal point in the study of ancient China. The ancient artifacts found in the two pits date to the time of the Shang dynasty, in the late second millennium BC, when the primary civilized society was flourishing in the Yellow River valley, in north China, thousands of miles from Sichuan. No similar find has been made anywhere else, and there are no inscriptions at the Sanxingdui site to shed light on its culture, which was apparently a distinctive Bronze Age civilization, unrecorded in historical texts and previously unknown. The discovery contributed to a fundamental shift from the traditional understanding of a single centre of civilization in north China to the recognition of the existence of multiple regional traditions, of which Sichuan was clearly one of the most distinct.

The culture that produced these artifacts is now known as the Sanxingdui Culture, and archaeologists are identifying it with the ancient kingdom of Shu, linking the artifacts found at the site to its early legendary kings. References to a Shu kingdom that can be reliably dated to such an early period in Chinese historical records are scant (it is mentioned in Shiji and Shujing as an ally of the Zhou who defeated the Shang), but accounts of the legendary kings of Shu may be found in local annals.

According to the Chronicles of Huayang…