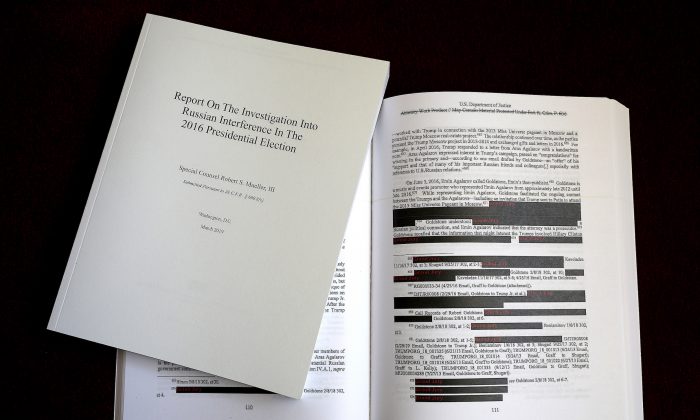 The nearly two-year-long investigation by special counsel Robert Mueller—at an estimated cost of more than $25 million—concluded that there is no evidence the Trump campaign colluded with Russia to win the 2016 election.

Mueller has been criticized for the length of his investigation and the fact that he investigated key claims made in the so-called “Steele dossier.” It is important. however, to understand how far-reaching the false claims in the Steele dossier were.

Paid for by the Clinton campaign and the Democratic National Committee, the dossier was spread by its author, Christopher Steele, and Fusion GPS co-founder Glenn Simpson to numerous media reporters, as well as the FBI, the Justice Department, Congress, and the State Department.

Many people in government and in the media—and, in turn, the general public—bought into the manufactured narrative that Trump colluded with Russia.

In this scenario, how could you possibly disprove the false allegations that were so widely spread? Any investigator in the Trump administration would have faced the risk of being seen as acting on the president’s behalf, and any investigation that didn’t examine every claim would risk being dismissed as incomplete.

It’s a disgrace that the Mueller investigation, based on false allegations made by a political campaign, needed to be launched in the first place. However, nothing short of Mueller’s extensive investigation could have vindicated Trump so thoroughly.

The report states that, without any doubt, there was no evidence of collusion by Trump. And because Mueller was seen by many of Trump’s opponents as being on “their side,” he couldn’t be accused of doing Trump’s bidding.

Furthermore, Mueller was given authority to investigate with a wide-scope, and the White House fully complied with the special counsel’s requests.

The result is a report that finally puts to rest the salacious and unverified allegations contained in the Steele dossier.

An analysis by The Epoch Times of the 103 main claims in the Steele dossier about Trump and his associates shows that the Mueller report didn’t verify any of the claims. This thorough debunking of the Steele dossier has helped Trump, although this help has come at the great cost of submitting to two years of unnecessary investigation.

The Mueller investigation also helped the Trump administration in another way. It took control of the examination of the allegations of collusion with Russia away from the FBI, which was headed by then-acting FBI Director Andrew McCabe.

Following the firing of FBI Director James Comey by Trump on May 9, 2018, McCabe’s FBI had sought to reengage Christopher Steele. We know this from congressional testimony by the high-ranking Department of Justice (DOJ) official Bruce Ohr.

McCabe, notably, had played a key role in the FBI’s counterintelligence investigation of the Trump campaign in 2016, which relied heavily on the Steele dossier.

This suggests that the FBI, even as late as 2017, still wanted to use Steele to keep investigating the president. What happened next, however, was that McCabe was completely removed from the investigation by Deputy Attorney General Rod Rosenstein, effectively stopping these efforts.

“The deputy attorney general in fact appointed special counsel Robert Mueller, and directed that Mr. McCabe be removed from any participation in that investigation,” a DOJ spokesperson said in a statement on Feb. 14.

Now that the Mueller probe has concluded and the president’s name has been cleared, some key questions remain: Why did the FBI investigate a political campaign using false information paid for by an opposing campaign? What role did unofficial foreign intelligence play in the investigations? And what was then-President Barack Obama’s involvement?