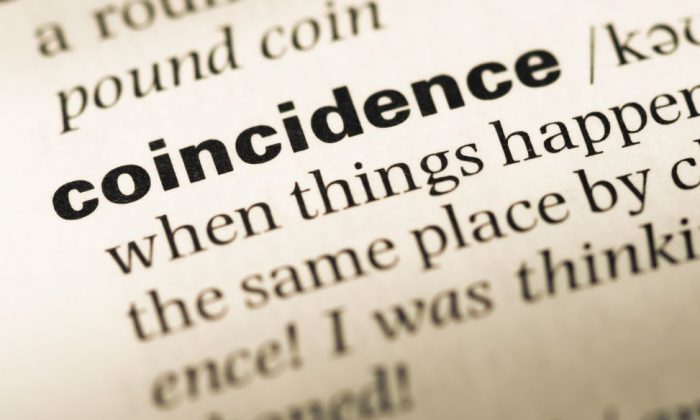 The Most Common Coincidences

To describe and classify is often the first step in developing a new science. Like the early botanists, I am developing a taxonomy for coincidences. Early botanists noticed similarities and differences among plants and categorized them; I’ve noticed the similarities and differences between the coincidental flora and fauna in the forest of daily life.

David Spiegelhalter at the University of Cambridge collected 4,470 coincidences; Julie Beck reported the results of an analysis of these stories in The Atlantic. A solid 58 percent of the coincidences “included words related to family or loved ones, indicating that people are more likely to notice coincidences involving people closest to them.”

The five most common types of coincidences in this analysis were:

Spiegelhalter is a statistician who believes that coincidences are best understood as interesting examples of the laws of probability at work. For example, the probability of two people having the same birthday is 1/365, which means that if you tell 365 people when your birthday is, you are very likely to find at least one person who shares the same birthday.

The image above is a map by Quid, a data analytic company, made from the full Spiegelhalter study data set. Each dot represents one story, and the lines connect stories that have very strong linguistic similarities. So, the light blue birthday cluster is tightly snarled, because there are only so many variations on finding out you share the same birthday as someone else. But the red cluster of shared death dates has some connections to the birthday cluster, indicating that some coincidence stories involve both birth dates and death dates.

The researchers also looked at the tone of the stories and found that more people described their coincidences using negative language (32 percent) or neutral language (41 percent) than positive language (25 percent). This finding is unexpected because synchronicities are generally considered to be positive experiences.

From 1,551 respondents to the website of the WCS, the most common coincidences were:

In descending order of frequency, the rest of the items lined up like this:

The specific frequencies for each item are listed in this bar graph (the scale is from one, “never,” to five, “very frequently”):

In both my analysis and the analysis of stories submitted to Spiegelhalter, coincidences involving external media are relatively common. Though there are some similarities, it is interesting that some different categories grew out of the two different approaches.

I developed my categories through an extensive literature review and statistical winnowing. Quid analyzed the content of voluntarily submitted stories to develop its categories.

The Quid analysis includes categories of marriage- and hospital-related coincidences, which I did not include in my survey. I include categories Quid does not, such as coincidences related to careers and the reflection of one’s thoughts in the external environment.

As we develop the science of Coincidence Studies, ongoing data analyses like these will sharpen the categorization of the coincidences.

Epoch Times reporter Tara MacIsaac co-authored this article. Follow @TaraMacIsaac on Twitter, visit the Epoch Times Beyond Science page on Facebook, and subscribe to the Beyond Science newsletter to continue exploring ancient mysteries and the new frontiers of science!

This article was previously published by Psychology Today, the first of a series of articles by Bernard Beitman, MD, on the science of synchronicity and serendipity. Beitman is a visiting professor at the University of Virginia. He is the former chair of the University of Missouri-Columbia department of psychiatry. See his blog, Connecting With Coincidence, to learn more about Coincidence Studies.