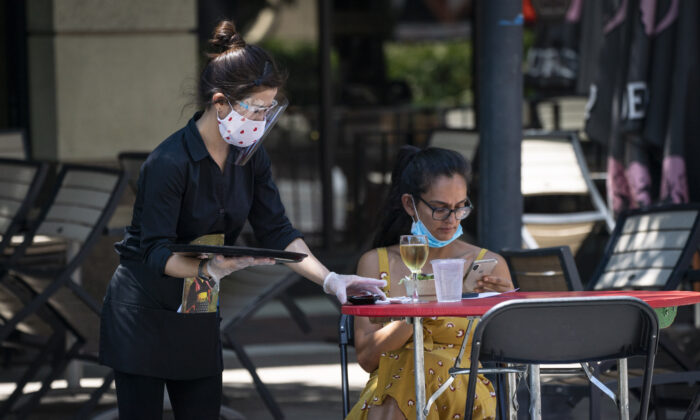 A waiter at Raku, an Asian restaurant in Bethesda, wears a protective face mask as serve customers outdoors amid the coronavirus pandemic in Bethesda, Md., on June 12, 2020. (Sarah Silbiger/Getty Images)
Viewpoints

The Minimum Wage Law Must Be Repealed

Perhaps the most sophisticated argument in favor of the minimum wage law is the one based on monopsony (a single buyer of labor in this case) or oligopsony (very few potential employers). It is a counter to this riposte: If the minimum wage law is so great, if it really boosts wages to the level stipulated by legislative enactment, why be so chintzy and demand to raise it, only, to something like $12 or $15 per hour; why not boost it to, oh, $1 million per hour. Then we would all be rich.

Based on monopsonistic or oligopsonistic considerations, this attempt at a reductio ad absurdum can be rejected out of hand. However, the very concept of monopsony or oligopsony is problematic from a theoretical level; it implies interpersonal comparisons of utility, a real big no-no in economics.

But mainstream economists would disagree with me on this; they are big fans of this monopsony theory. Even they, however, for the most part, agree that—to the extent it exists at all—it pertains, only, to high wage employees, not people whose productivity is anywhere near the minimum wage level. Why is that? That’s because a monopsony (really, we’re never talking monopsony, one buyer; we’re talking oligopsony, a few buyers) means that only one firm can hire you! But dishwashers, floor sweepers, clerks, people who ask if you “want fries with that?” can work for, potentially, literally, hundreds of thousands of employers, not just one or a few. Neither monopsony nor oligopsony can apply to them, and these are the minimum wage workers. The same, by the way, applies to people who earn in the range of $50 per hour: plumbers, carpenters, truck drivers, skilled mechanics, repairmen. It applies, too, to doctors, dentists, lawyers, who earn in the range of several hundred hourly. They, too, have potentially, thousands if not tens of thousands of employers.

Who, then, really faces monopsony, oligopsony? People for whom there are only a few potential employers: movie actors, professional athletes, nerds who are so specialized that only IBM and Microsoft can hire them. Professors: there are only 4,000 universities in the country. I’m willing to count that as oligopsony, with a generous interpretation. But they earn way more than the minimum wage.

What determines wages in the first place, in the absence of any minimum wage or any other such law? It is productivity (actually, technically, discounted marginal revenue productivity). In 1920, before the advent of the minimum wage, a craftsman who could produce value for his employer at the rate of $4 per hour, would tend to earn exactly that, $4 per hour. (In equilibrium, there would be no “tendency” about this). Why? That’s because any other wage would be untenable, could not long last. Suppose this person were paid $1 per hour. Then, his employer would earn $3 per hour off his labor. But some other employer would be glad to pay $1.25 per hour. Another would raise this to $1.50. Where would this process stop? As close to $4 per hour as the costs of finding such underpaid workers and hiring them away from their present bosses would allow. That’s why California growers go down to Mexico to entice workers there to pick crops for them. Why do those workers agree? The Mexicans, in Mexico, are being paid less than their U.S. productivity levels.

Could the wage for this $4 per hour worker be $7 per hour? No, no, a thousand times no, for this would mean that such an employer would lose $3 per hour. If he does this once too often, he’ll risk bankruptcy. This is simply unsustainable. Now, a minimum wage of that amount, $7, is introduced. Will this raise the wage of our $4 per hour worker? Of course not, since you can’t raise productivity levels with legislative fiat.

Card and Krueger and many others have done empirical studies. They find that wages rise for low productivity workers after the imposition of a minimum wage, and find no or very small unemployment effects. But other things could have changed during this time period, raising productivity levels, such as cooperative capital equipment. Or, these studies just were not very good. They were non replicatable, the key element in empirical economics.

Before the advent of this pernicious law in the late 1930s, the unemployment rate of unskilled black male teens, and that of skilled white male middle-agers, was almost identical. Nowadays, the former are unemployed at quadruple the rate of the latter. If that doesn’t shake you up on this issue, nothing will. Well, maybe these quotes will, from two very competent economists, to make an understatement of the year:

Gary Becker: “It’s simple: Hike the minimum wage, and you put people out of work.”

Milton Friedman: “A minimum-wage law is, in reality, a law that makes it illegal for an employer to hire a person with limited skills.”