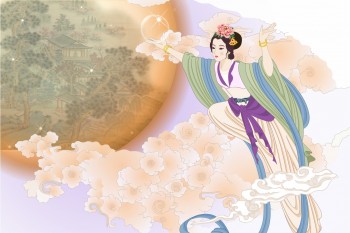 The Mid-Autumn Festival and the Lady of the Moon

The Mid-Autumn Festival is one of the most important festivals in China. It is celebrated on the 15th day of the eighth month of the Chinese lunar calendar when the moon is usually at its fullest and roundest. This day is also considered a harvest festival because fruits, vegetables, and grains are harvested at this time. There are many beautiful legends about the moon in China. The story of Chang’e, the lady of the moon, is the most popular one.

A long, long time ago, there was a happy young couple who lived near the Kunlun Mountains. The man was called Houyi and his beautiful wife was Chang’e. They were both very kind and were loved by the villagers.

One day, a Bodhisattva passed by and gave Houyi and Chang’e the elixir of immortality as reward for leading a charitable life. She told them the elixir would give them eternal life. The couple were very happy with the reward and decided to drink the elixir together on the 15th day of the eighth lunar month when the moon was full and bright.

As they were rejoicing on that day, nine vultures soared into the sky and transformed into scorching suns. Ten suns burned fiercely in the sky like smoldering volcanoes. The trees and grass were scorched. The land was cracked and parched, and the rivers ran dry. Many people died of hunger and thirst.

Chang’e was scared and wanted to leave earth with her husband immediately. She drank half of the elixir. As she reached out to hand the remainder of the elixir to Houyi, it fell to the ground and spilled.

Houyi, though deeply grieved, found his resolve rekindled at the sight of people suffering. He took out his red bow and white arrows and shot down nine suns, one after another. The weather immediately cooled down. Heavy rains filled the rivers with fresh water, and the grass and trees turned green. Life had been restored and humanity was saved.

Soon the elixir began to take effect and Chang’e felt herself being lifted toward Heaven. She decided to live on the moon because it is nearest to earth.

Houyi was very sad while watching as Chang’e flew off to the moon. He called out her name to the moon as it grew very round and bright. He hurried to his yard and put some food that Chang’e loved and some incense on a table to show his love for Chang’e.

Although Chang’e lives on the moon, her heart remains in the world of mortals. Never did she forget the deep love she has for Houyi. Years later, many people join Houyi to send blessings to Chang’e every year on the 15th day of the eighth month.