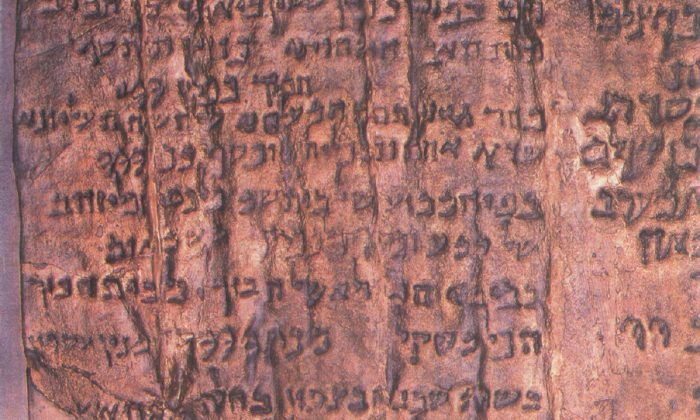 The Lost Treasure of the Copper Scroll

The Copper Scroll is part of the extraordinary cache of 1st Century documents first discovered in caves at Qumran, popularly known as the Dead Sea Scrolls. The Copper Scroll, however, is very different from the other documents in the Qumran library. In fact, it is so anomalous among the Dead Sea Scrolls – its author, script, style, language, genre, content, and medium all differ to the other scrolls – that scholars believe it must have been placed in the cave at a different time to the rest of the ancient documents. As Professor Richard Freund stated, the copper scroll is “probably the most unique, the most important, and the least understood.”

While most of the Dead Sea Scrolls were found by Bedouins, the Copper Scroll, which is now on display at the Jordan Museum in Amman, was discovered by an archaeologist. It was found on March 14, 1952 at the back of Cave 3 at Qumran. It was the last of 15 scrolls discovered in the cave, and is thus referred to as 3Q15. While the other scrolls were written on parchment or papyrus, this scroll was written on metal: copper mixed with about 1 percent tin.

The corroded metal could not be unrolled by conventional means, so in 1955, the scroll was cut into 23 strips and then pieced back together. Its’ language appeared different from the others – the Hebrew was closer to the language of the Mishnah than to the literary Hebrew of the remaining Dead Sea Scrolls. John Marco Allegro, who had supervised the opening of the scroll, transcribed its contents immediately. It then became clear that there was something very unique about its content. Unlike the other scrolls, which were literary works, the copper scroll contained a list.

It was no ordinary list, rather it contained directions to 64 locations where staggering quantities of treasure could be found. Sixty-three of the locations refer to treasures of gold and silver, which have been estimated in the tonnes. Tithing vessels are also listed among the entries, along with other vessels, and three locations featured scrolls. One entry apparently mentions priestly vestments. In total, over 4,600 talents of precious metal are listed on the scroll, making the total haul worth in excess of a billion dollars.

“Forty two talents lie under the stairs in the salt pit … Sixty five bars of gold lie on the third terrace in the cave of the old Washers House … Seventy talents of silver are enclosed in wooden vessels that are in the cistern of a burial chamber in Matia’s courtyard. Fifteen cubits from the front of the eastern gates, lies a cistern. The ten talents lie in the canal of the cistern … Six silver bars are located at the sharp edge of the rock which is under the eastern wall in the cistern. The cistern’s entrance is under the large paving stone threshold. Dig down four cubits in the northern corner of the pool that is east of Kohlit. There will be twenty two talents of silver coins.” (DSS 3Q15, col. II, translation by Hack and Carey.)

Other experts have suggested that the treasure could be that of the Second Temple. However, historical records suggest that the main treasure of the Temple was still in the building when it fell to the Romans. It does not rule out this possibility though – a significant portion of the treasures may have been taken away and hidden before the Romans arrived.

There are many though who are not so concerned about where it came from, but much more interested in where it is now. The copper scroll has led to one of the biggest treasure hunts in history, with numerous expeditions setting out to find the valuable hoard.

However, finding the treasure is no easy feat. The locations are written as if the reader would have an intimate knowledge of the obscure references. For example, consider column two, verses 1-3, “In the salt pit that is under the steps: forty-one talents of silver. In the cave of the old washer’s chamber, on the third terrace: sixty-five ingots of gold.” Without a starting point, such directions are meaningless. Furthermore, the treasure may already have been looted by the Romans two thousand years ago and may now be long gone. But this hasn’t stopped the enthusiasts.

One of the most extensive treasure hunts took place in 1962, led by John Allegro. By following some of the places listed in the scroll, the team excavated many potential burial places for the treasure. However, they eventually returned empty handed, and despite being available for several decades, the copper scroll has not yielded a single material find. Nevertheless, to anyone who has a little bit of the Indiana Jones spirit inside them, it remains a fascinating and tantalising artefact, and will no doubt continue to tempt the imaginations of scholars and the public alike for centuries to come.