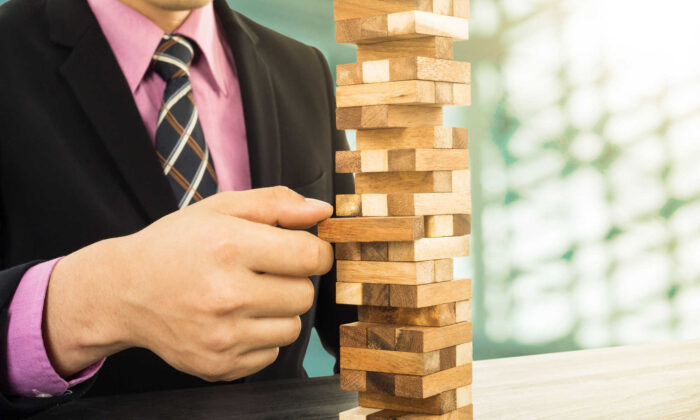 Lockdowns Kicked Off This Depression

If you were on vacation last week, good for you. You missed one of Congress’s greatest-ever scams. They just approved some $750 billion (do these numbers even mean anything anymore?) to “transition” us to reliance on the wind and sun from fossil fuels and coal, and also to subsidize a bunch of chip manufacturers because U.S. companies screwed up their inventory control two years ago.

The worse of the two bills is called the Inflation Reduction Act. Shameless!

The details of this don’t matter as much as the big picture. What you have in Congress and the presidency right now is exactly what one might expect from an empire in decline. Special interests are tapping the petty racketeers in political power to pillage as much of American prosperity as possible before they are swept out of office in November.

Think of a criminal band that has entered a majestic home. They are grabbing as much as they can before the owners come home. If it isn’t nailed down, it is going straight into the satchels and put on the truck to be carted away.

Actually, it is worse than that. What Congress is doing today with its out-of-control trillions in spending is robbing generations hence of a chance for prosperity. We will be left holding almost nothing to hand on to our kids and grandkids. Most of all, what’s being stolen is hope for the future.

Recent days have been consumed with a discussion about whether we are in a recession. The Biden administration wants to change the conventional definition, as predicted. The only piece of data to which they can point is the low unemployment rate, while failing to indicate that labor participation itself hasn’t recovered from 2020 and continues to fall dramatically.

It appears as if we’ve lost 40 years of progress in a mere two and a half years. This isn’t an exaggeration: real personal disposable income has been falling since May 2021, the longest period of decline since World War II. That follows an explosion in printing-press faux wealth in 2020 that went as quickly as it came. Also last week, the Fed raised interest rates again, all in the name of controlling inflation. But the damage to the dollar is already done: since lockdowns, we’ve lost some 14 percent of domestic purchasing power. This has been devastating for savings, the rate of which has fallen to half what it was 10 years ago. In real terms, wages and salaries are falling fast.

And spare some pity for the manufacturers too, who face their own disaster.

What is the effect of this? Sure, it could pull back the rate of inflation a bit, maybe. Mostly, however, it further wrecks the abysmal bond market which has been performing worse than at any point since the Civil War. That’s what one might expect from a Fed policy moving from zero or negative rates to positive rates. It’s time for a return to reality.

It has also locked up the consumer end of the housing market. People only a year ago were flipping houses like crazy, driving up prices as never before and absorbing vast amounts of upside inflationary potential. But now, what had been 2 percent rates on 30-year mortgages are soaring to 6 percent and higher, meaning that no existing owner can afford to sell and buy without taking a huge haircut.

As a result, we are facing a massive supply curve shift to the left: soaring prices plus falling demand. The industry is in quite a panic.

But that’s just the start of it. Credit card debt is up and defaults as well, as real incomes are falling dramatically. Business investment is down, and consumer confidence has crashed to lows never before seen, even as trust in government will soon be in the single digits. Very crucially: the last time the Federal Reserve squeezed the life out of easy-money policies, in the late 1970s, we also had a new emphasis on economic growth. Yes, a recession resulted, but under the influence of pro-growth economists, the whole country embarked on a different path. That was the path of growth and hope.

That isn’t happening now. On the contrary, the Fed is driving the recession at a time when the ruling class has decided that the rest of us should be poor and hungry, driving Flintstone cars and foraging for food. The result, for now, is shocking stagflation. But we don’t even have a word yet for what might be coming. Depression is already used. How do you describe high inflation plus a manufactured depression?

Still, The New York Times assures us that this massive spending bill will help the government achieve its great climate goals. After all, they say, the average temperature has risen by 2 degrees Fahrenheit over the past 100 years, which, they further assure us, is the fault of industrial prosperity. To be sure, the average person only lived 30 to 40 years in 1800. During the same century that these people claim we’ve been burning up the planet, our average life spans lengthened to 75 years.

Even granting the sketchy claim that your day trip and barbecue grill are causing the planet to overheat, one might suppose that life extension would be celebrated as a good thing, rather than a climate catastrophe that cries out for the wholesale dismantling of industrial civilization. And what happens if the plan to lock down every two years in order to save the planet doesn’t work out as planned? Who will pay the price?

But truly, there is no making sense of these people anymore. They are ready to shell out hundreds of billions to take over arable acreage with solar panels even as we face a food crisis, and festoon the countryside with bird-slaughtering windmills rather than permit more pipelines and refineries to open.

The emergency of our times is undeniable, as is the solution of putting a hard stop on the insanity of government spending, money printing, mandates, controls, and impositions that are killing economic growth and shortening life spans. But it’s no longer clear whether the current regime has a connection to reality at all. The current plan seems to be to wreck as much as possible before they are all swept out of office.

Putting it all back together again will require herculean efforts, an about-face on policy we’ve never seen in our lifetimes.

It was all kicked off by the most draconian and destructive public-health policy on record, one that utterly shattered the liturgy of life, took away education for the kids who were forced to learn alone with masks, shuttered churches and civic meetings, mandated shots on an unwilling population, demoralized labor markets as everyone was forced to take their place as essential versus nonessential, broke long-established market relationships, blew up the federal budget many times over, and generated savings-wrecking inflation that has utterly transformed expectations for prosperity and progress.

Many of us despaired in the dark days of March 2020 concerning what could be coming. We couldn’t have imagined half of it. Even now, as mainstream media reports are starting to report on the overdoses and educational losses, and collapsed public health, and economists are sounding the alarm about the future of enterprise itself, few are willing to admit the root cause. The lockdowns kicked off this hell.