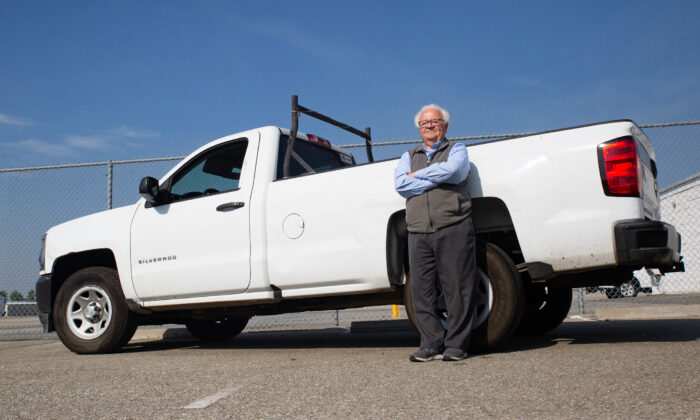 Fullerton Lions Club member Matyas "Matt" Hunyadi stands near his truck he nicknamed "The Mule" in which he helps deliver food and supplies to the needy, in Fullerton, Calif., on Nov. 9, 2021. (John Fredricks/The Epoch Times)
Southern California

The Lion and The Mule: Volunteering During the Pandemic

FULLERTON, Calif.—Inside Wings Café, an American aviation diner at the Fullerton Airport filled with vintage World War II décor, Matt Hunyadi, 81, recalls stories his parents and older siblings told him about their escape from Germany in 1945.

Before the war ended, he and his family, forced by the Nazis, rode in the Holocaust trains with other refugees and were used as shields to protect the Germans from American warplanes attacking the locomotive.

At five, Hunyadi, returned to his birthplace, Hódmezővásárhely, Hungary, a city in the southeast on the Great Hungarian Plain, approximately 30 miles from the Romanian border.

A decade later, Hunyadi protested the Stalinist government during the Hungarian Revolution until he escaped to the United States, the same country the Hungarian government told him was evil as he was growing up. He remembers frequently wearing his rifle strapped over his right shoulder.

He orders a half tuna sandwich on toasted rye bread with a cup of minestrone.

“And please give me the bill,” he says.

Hunyadi passes the menu back to the waitress and smiles with a charming glare in his eyes behind broad frames.

“He comes here a lot,” says the waitress.

Hunyadi frequently dines at the restaurant between delivering boxes of food to homeless communities across north Orange County.

The lions packed up “The Mule” with food donations from religious groups, from Sikhs to Lutherans.

“We’re in the distribution business,” he says.

Membership is exclusive—by invitation only, according to Walter Rountree, president of the Fullerton Lions Club. Lions are people of good moral character who lead by example, build relationships, and improve the world through kindness, he says.

“Matt never, as far as I know, saved anybody from drowning or anything like that,” Rountree says. “However, he is giving a lot of himself to others, and that’s what Lions do.”

Not only do Hunyadi and the Fullerton club deliver food to the hungry weekly, but they also donated handmade masks to the local St. Jude’s Hospital. Additionally, they collected and donated approximately 700 eyeglasses.

“The bottom line is we serve,” says Hunyadi. “We help other people who need help.”

Hunyadi pauses as the waitress refills his iced tea.

“Why do I do it? Because it makes me feel good,” he says. “When you see the people that line up for the food, you know? I helped somebody. It’s good.”

While the pandemic locked Californians inside their homes, Hunyadi says he never felt afraid of the virus and rose to the occasion to help those who had sheltered in place.

“Remember, I’m an old infantryman,” he says. “As a young man from Hungary, I won’t put my hands up very easily, you know?”

An empty cup of minestrone sits on top of an empty plate in front of Hunyadi.

He pulls out a red and black canvas tote bag with the Lions Club International symbol patched in the center.

Operation Military Christmas is his next act of community service, he says, walking out to his “ol’ trusty Mule.”

He says the Lions will fill the tote bag with gifts for young military members who will experience their first Christmas overseas.

The operation started five years ago with about 100 bags delivered. This year, they will fill and distribute over 1,000.

“I can relate to them,” Hunyadi says. “Although I was 21 at the time that I joined, many kids joined the army at 18. … and the first Christmas, especially if you’re overseas, is really hard, and all of a sudden, you’re over there with a bunch of guys older than you and you get very sentimental.”